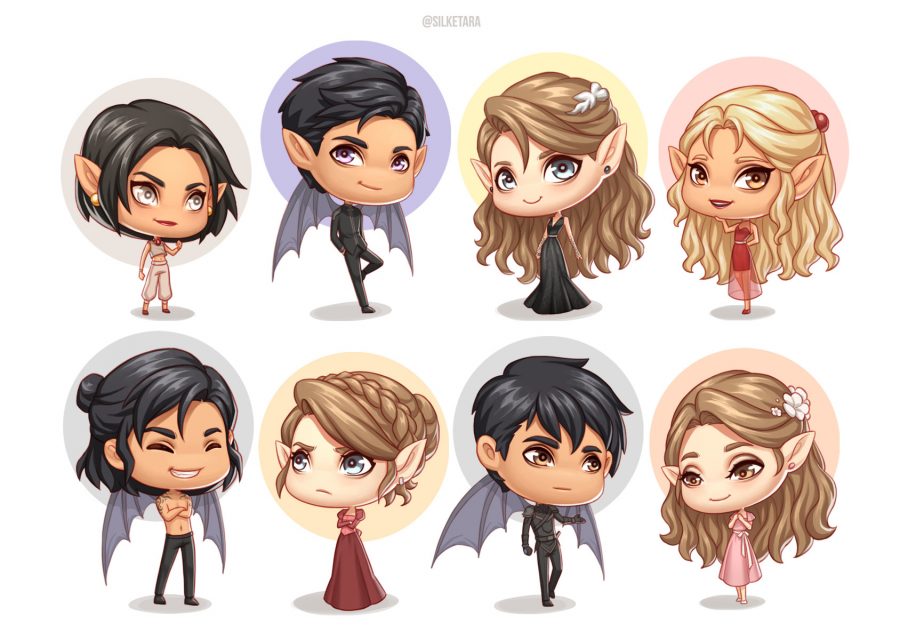 Today I have a surprise for you: an interview with Silketara, a super kawaii and lovely independent artist that captivated my heart long ago. If you’ve been following this site, you know that Yours Truly loves kawaii art to the bone. There’s no surprise then that I would fall for Silketara’s fantastic art. She’s super sweet and very attentive. She has tons of literary fan art, but also fan art related to pop culture. Plus, her original characters are to die for. So, let’s dig in the artist!

Pepi: When did you start drawing? Was it your dream?

Silketara: I remember I was already active at drawing at the age of 7. I basically drew on anything I could. On my textbook, my room’s wall, my desk, even my grandma’s calendar. I love drawing, but I never thought that I want to pursue it as a job. Not until I was in high school when somehow, magically, I just learned that there’s an art school I can go to, and now it became my full-time job!

S: This is a long story, and I might stray from the question hahaha. Bear with me.

So, I personally didn’t read much¸ compared to playing games and watching movies at least. I am very picky about the genre. Because I usually just want to read a fantasy or fairytale novel without any romance and war in it. Since I’m very picky, it’s hard for me to find a book that suits me. So, for a few years before 2017, I didn’t read a single book, not even a comic book. But somehow somewhere around 2017, after I finished re-watching an old anime, I craved for a story similar to that because I loved it so much. So I looked for anything that sounded similar, and there’s when I came across A Court of Thorns and Roses (ACOTAR) by Sarah J. Maas. To be honest, the story is not even close to the one I was looking for, but somehow it sounded interesting, and the reviews seemed good. So I read the first two books the two weeks before the third released, and I loved it.

Please note that I was in a massive artblock for two years before this, and ACOTAR helped me find inspiration again. So I drew some chibi fanart of the two main protagonists. I posted it on Instagram and Tumblr as usual, nothing special. A day later, the one on Tumblr blew up. Then followed by the one on Instagram. It gained a lot of attention, and I don’t understand why (I still don’t understand hahaha). From that, I started chatting with some people, saw comments from a lot of people, and they help me find other books that I find interesting.

So this all started from there, and I am really thankful for it.

P: What are your favorite characters that you’ve drawn to date?

S: I would always say that my original characters, especially Ortia and Kian are the most fun characters to draw. But that’s what any parents would say about their kids, hahaha.

Anyway, aside from them, I do love drawing Lira from To Kill a Kingdom novel just because I really enjoy drawing mermaids.

P: Can you tell us something about your original characters?

S: Yes! If by original characters you mean Kian and Ortia, then yes again.

So, I have a story called Insignia. That’s not the only story I have created, but it happened to be one I like the most (and the most recent one). The story is about a Succubus called Ortia that is friends with a human. She soon learned that the human, Kian, is not entirely an ordinary human as his father is an Archangel while his mother is just a human. There’s a lot to tell about Kian’s background, and I still have a long way to go.

When I first developed the story and noticed that a lot of people seemed curious about it, I started thinking about how I could share it so that people could access it. But I didn’t know how. I can’t write, and I’m not really fond of making a comic because it takes a long time to finish. I can’t just spread the story on illustrations either because it’ll be hard to track. So, a comic is my best bet, and I decided to make it. It’s my first time, and the story might look cheesier than I intended. But hey, I’ll learn from that hahaha.

But seriously, I want to thank you guys for the support because that means a lot.

P: Do you have any advice for people who want to start drawing?

S: This might sound repetitive because you might have already heard this somewhere else. Just keep practicing and keep observing. Again, nothing is original. We all get inspiration from a lot of things, and we should try to learn from them. For example, if you really like how an artist colors the eyes and like another artist eyes drawings, and you want to learn, then do it by combining the two. That works. But please, don’t copy is as it is. There’s a difference between taking it as an inspiration and tracing it and then claiming it as your own.

P: Where can we find you?

S: I’m mostly active on Instagram. You can find me there as Silketara or just click this link www.instagram.com/silketara.
I basically have most of the social media account by the same name, but I rarely update them. So if you want to contact me, just go to my IG or e-mail me at silke . tara @ gmail . com
Also, I have a shop! Go visit www.sIlketara.storenvy.com and have a look.