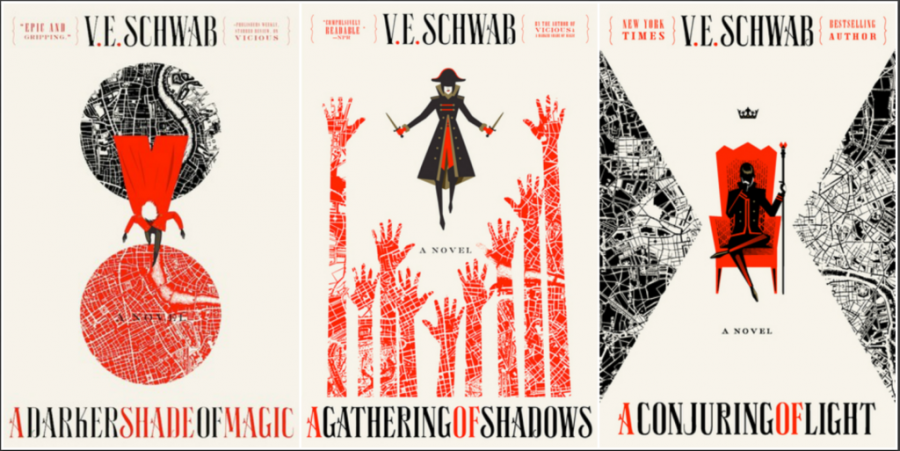 I finally read A Darker Shade of Magic [The Book Depository] [Waterstones], the first book of V. E. Schwab’s Shades of Magic trilogy. I had to read it in small bits, and that killed me because the book is a masterpiece. You get to love almost all the characters, and fiercely hate the villains in a bloody way. From the first page, you’re enchanted with Kell, one of the main characters. But as soon as Lila arrives, things get funky. Kell is an Antari, a magician. The Antari use blood magic to travel between parallel Londons. And, as you might be thinking, the Antari are very rare species. So Kell sends messages from the courts of Red, Grey, and White London. Magic seems to be blooming in Red and almost gone in Grey. Once, there was Black London, where magic was vicious, and things got funky. Because the doors to Black London were sealed, traveling from one to another is quite difficult. So, the Antari go back and forth with messages. There’s only one tiny problem: Kell breaks the law every single time. He’s a smuggler that collects objects from one London to another. And that is a dangerous thing to do.

SPOILERS: this review has a massive amount of spoilers. You only need to know that the book rocks, that you’ve got a prince in it, a smuggler who travels from London to London, a daring thief, a slave, and a pair of psychopaths as villains. Now: go read the book.

Kell was adopted by the Red London’s Royal family, the Maresh. His brother, the golden Prince, Rhy, knows about Kell’s dangerous hobby. He has asked him many times to stop, and now he puts an ultimatum. The Prince is famous among men and women and has great charisma. He’s worried about Kell, and rightly so: Kell is about to smuggle something hazardous. Kell goes to White London to deliver a message. The Court is ruled by two sadist twins that own and use magic to control Holland, a sad Antari. In his way back, a woman approaches him and asks for his help. She needs him to smuggle an object to Red London. He doubts, but he finally accepts.

He does try to deliver the tiny parcel, but someone attacks him. He flees and inspects what he’s just smuggled into Red London: a chipped black rock that calls his name. It’s pure black magic. As soon as he realizes he tries to hide, but his pursuers follow him to his second room in a tavern, and he has no option but to flee. So, he ends up in Grey London where he meets Lila.

Lila is a thief who wants adventure and to become a pirate captain. When she first meets Kell, she steals the rock from him. Since magic calls magic, Kell ends up in her room. After some comings and goings, they end up teaming up. However, the one who is going after them is Holland, the Antari from White London. It seems that the twins need the black stone for some cruel endeavors.

Kell has smuggled many objects in his travels. Out of need, and using the sick power of the stone, he ends up smuggling Lila to Red London with him. They’re all preparing for Rhy’s birthday, and it seems okay for them to find somewhere to hide while Kell comes up with ideas on how to send the stone back where it came from (Black London). However, using the rock isn’t exactly safe. And Red London might not be as it seems.

When Kell first used the stone to flee, he left some darkness behind. The dark magic has spread like a disease eating up the hosts it takes. But this is not the only problem here: Astrid, one of the twins, has possessed the Royal family. To be more exact: Rhy. Holland gave him a pendant, and it was a trap. When Kell, Lila, and Rhy meet in the palace, things go very wrong. Astrid wants the stone, and she ends up stabbing Rhy. Rhy stops being possessed then, but Astrid goes away and possesses someone else.

The only way Kell has to save his brother is to use the stone and bind his soul with his brother’s. It works, but he has to flee Red London with Lila after fighting Holland yet again. It’s an epic battle that leaves Holland in shreds, and Kell with the stone attached to his hand and polluting his body and mind. Then they both go to the twin’s palace, and while Kell fights Athos, Lila tries to kill Astrid. We’re set to another incredible fight scene where our heroes end up very damaged. (I won’t spoil this, but it’s epic.)

And we’re set up for the final battle that happens inside Kell. The stone is poisoning him, and the only way is to fight it from within. If he cannot manage, Lila will have to kill him. This scene was pure angst! Since there’re two more books in the trilogy, you can rightly expect Kell to survive. Alas, he won’t be the same.

Using magic, he ends up sending Holland and the stone to Black London. Back at home, both Kell and Lila have a lot to say to the Royal Family. Kell is pardoned, and Rhy is back to his own self. However, things feel weird. And Lila is out and about plotting piracy.

This book is a ride of angst, incredible magic fight scenes, alluring LGBTQ+ characters, and two psychopaths that will freeze your blood. This is not for the weak. The writing is like a song that will make you travel from London to London with ease. Characters come alive, and magic will haunt your dreams. And, if you seek for adventure, I can assure you this book has more than plenty.

A Darker Shade of Magic [The Book Depository] [Waterstones] is hard to put down. So, if you’re busy like me, you’ll end up with an itch. You want to read more, but don’t have enough time as to finish it. You’ll want more and more, almost like the twins. They craved for power, you’ll crave for Kell, Lila, and Rhy.

Copyright: Images on this post (C) A Darker Shade of Magic (different editions) / Last image on the post (C) depepi.com / Memes & Gifs (C) by their owners.

The Storm Crow by Kalyn Josephson