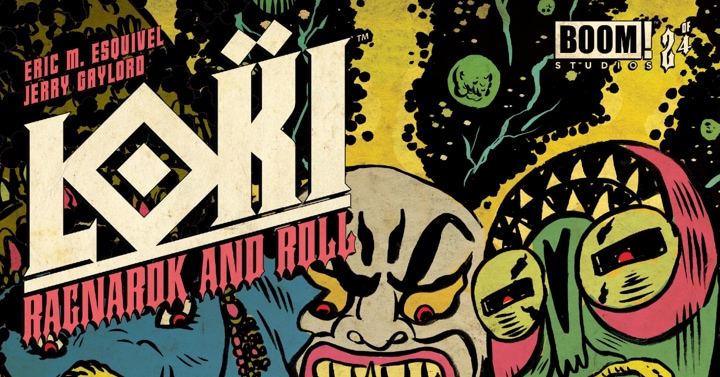 Things get funky in Loki: Ragnarok & Roll [The Book Depository] [Waterstones]. While Loki has become a great rock star in Midgard, Gods in all pantheons are starting to get nervous. Could it be a plan from the Norse Gods to take it all?

One thing is sure: the band adores Loki, but they seem not to grasp that he is a God for real. With Loki’s charms, he can easily handle them and convince them to rock the hell out the world. However, will they keep the Trickster’s company as soon as things get funky? I say that because Thor is on the move to Midgard in pursuit of Loki.

Officially, Odin was the one to banish Loki to Midgard until further notice. But, as his popularity and fame rise, so do the concerns of Gods from many different pantheons. The more famous Loki becomes, the more power the Norse Gods have. Even if people are just cheering at Loki’s music, that’s enough to make the Norse powerful again. Apparently, the others are pissed with this. However, Odin sent him there as a punishment. Or, did he lie?

Even if Loki is the official Trickster of the Norse Gods, the reality is that there’s a much bigger trickster happily hopping around: Odin. No wonder the other Gods are very wary of him. His curriculum isn’t short of trickery!

What happens is that all the Pantheons ally themselves against the Norse. The first one to reply to this menace is Thor. Hercules is the one to talk with the Gods, but the one Odin sends is Thor. So, imagine how this ends: in a huge fight. They stop fighting in the Bifrost and sent to Midgard in middle of the biggest concert Loki is performing with his band. Thor and Hercules crash it on stage! Before there’s pure chaos, Loki manages to convince his bandmates to keep it up: the audience will think it’s part of the show.

Thor seems to be losing. He appeals to Loki, telling him that war is brewing yet again. Loki answers clearly that he doesn’t care at all. He was banished, and now he’s famous. If you have a war, deal with it.

But can Loki just ignore what’s happening on stage? Thor is bloodied, and so is Hercules. However, as the audience cheer Loki, he ends up grabbing Mjolnir and feels energized. He always wanted one hammer like this, and with all the juice from the audience, perhaps he’ll be able to win Hercules.

Despite all the power that Loki has now, the problem is that he can lose it all because of the other Gods. He was just doing his thing with his band, or so it seems. If Loki ends up fighting Hercules, will the audience survive? Will his band keep up being so charmed by Loki?

Loki: Ragnarok & Roll [The Book Depository] [Waterstones] is a great take on the Trickster and the Norse Gods. It fits to Loki to be the God of rock & roll (and also metal). I wonder what will happen to his band.

Ace of Shades: Will You Play For Your Life?