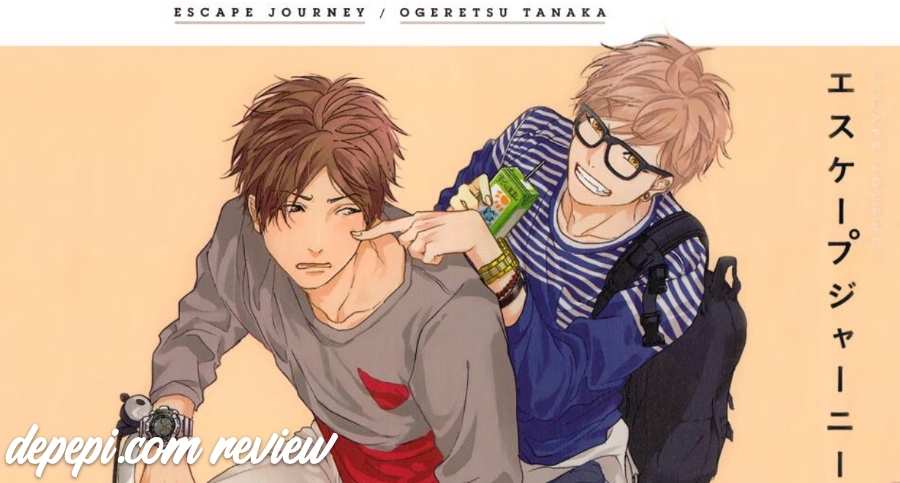 Some weeks ago I found Escape Journey [The Book Depository] [Waterstones] by Ogeretsu Tanaka in my local comic book store. This yaoi manga is sweet, although there’re some disturbing scenes in it. We follow the steps of Naoto, who enters University with high spirits and then he meets his ex-boyfriend there. Taichi, despite being terrible at languages, decides to take English instead of something technical. He was good at sciences in high-school and yet he’s going to study along with Naoto. Despite the efforts of Naoto in avoiding him, they end up in the same group of friends, including two sweet girls: Fumi and Yuki. While Yuki already has a boyfriend, Fumi is all about Taichi. But, who does Taichi like?

NOTICE: this post contains SPOILERS and MATURE content. Follow with discretion. The pictures that are juicier have an NSFW note. [Yaoi / Comedy / MxM / Slice of Life/ Romance/ BL / Rape]

It shouldn’t be a surprise to find two characters that have no clue about love in a yaoi manga. Naoto and Taichi are just clueless about loving relationships, especially Naoto. For starters, he needs to label everything in his life, and that includes connections. Naoto thinks about boyfriend and girlfriend terms, so he believes that his relationship with Taichi failed due to that they couldn’t become more than just lovers. Taichi, on the other hand, has jealousy and communication issues. He gets jealous and solves everything with sex. Plus, he can get violent.

When they were in high-school, they were very close friends. Taichi had issues because his parents were getting divorced, and then Naoto in wanting to cheer him up ended up making him fall for him. One day, they took a ride on a bicycle, and they ended up making out.

But they split because the relationship couldn’t go farther away from sex. Everything became too dangerous, and Taichi instead of telling what he thought or wanted, ended up bitting Naoto. So, they broke up. Now, Naoto is just trying to convince himself that they can only be friends. But, on the night when the group of friends is out, Naoto gets drunk, and Taichi ends up bringing him home. And Naoto ends up luring Taichi again. They make sex, and although Naoto feels that they’ll end up making the same mistake again, he cannot help himself and ends up going all the way. Alas, in the morning he tries to escape from Taichi’s room.

To make things worse, Yuki asks Naoto to help Fumi to get closer to Taichi. Fumi is very shy and likes Taichi. However, she doesn’t know how to approach him at all, so Yuki ends up asking for help. Everybody knows that Naoto and Taichi are close. However, nobody knows that they’re lovers again (even if Naoto tries to escape in the morning). So, Naoto starts thinking about his relationship with Taichi. They’re sex friends, and it seems that they can’t be more than that. With Fumi, Taichi could have a family, something that Naoto cannot give to him, ever in his life. However, it’ll take almost all the manga for Naoto to understand that what he wants from Taichi isn’t just sex, but also a more profound relationship for life! We’re talking about real love here.

In trying to help Fumi get closer to Taichi, the four of them go to the aquarium. However, Taichi is more into holding hands with Naoto than trying to be closer to Fumi. Naoto gets so hot that they have to take a taxi to get home and make wild sex. After that, they keep doing sex encounters. It’s sweet to see how Taichi ends up taking Naoto’s hand and caressing one of his fingers. Still, they don’t know what their relationship status is, and for the time being, they’re both repeating the path of having sex and not talking at all. Seriously, their communication skills are lame.

It arrives at a point that Naoto wants something else, but old patterns will play against the couple. Naoto asks Taichi to stay at home and watch some movies, without sex at all. However, it’ll backfire because when Naoto gets a message from Mika, a girl friend he has, Taichi ends up being super jealous and starts kissing Naoto. Naoto doesn’t want to do anything, and since none of them are talking really, the thing gets ugly. Taichi kicks Naoto, and then he rapes him. Obviously, Naoto escapes. And apparently, things get awkward at University. However, Taichi and Naoto keep up being friends. At this point, Naoto is rooting for Fumi to get close to Taichi and make him happy.

What Naoto doesn’t know is that Fumi is just helping Taichi with his English. Fumi turns out to be an excellent friend because she realizes that both guys need a helping hand with their relationship. Good Fumi decides to trap them. She asks Taichi to meet in a particular location at the stairs. Naoto and Yuki end up hiding and ears dropping. When Fumi confesses that she like Taichi, he rejects her explaining that he’s already in love with someone else. When Fumi asks Taichi that if studying English, something he’s terrible at, has something to do with the person he loves, he answers yes. At that moment, Naoto realizes that Taichi is talking about him. He cracks and starts crying like a baby. When he recovers, he decides that he has to go and find Taichi and explain to him his feelings. (About time!)

So, mirroring what Naoto did to cheer Taichi up when they were younger, he takes him on a bicycle ride. This time Naoto opens his heart and explains to him everything, including his fears. It’s here when both end up opening up and acknowledging that they love each other. Of course, this ends up in lots of wild lovemaking. Happy lovemaking, mind you. However, they both needed the helping hand of Fumi to start talking to each other instead of just reacting and doing stuff they thought was best for the other.

Fumi is the real angel in this BL manga since it’s her great heart that triggers these two very clumsy guys to open up to each other. Yaoi is plagued with clueless lovers, but these two are terrible, so terrible that it’s cute.

Escape Journey [The Book Depository] [Waterstones] has lots of comedy, drama, and harsh moments. However, it also has excellent friendship examples, many times missing from the yaoi narratives. And, of course, it has plenty of juicy sex scenes. But, perhaps, the thing that makes this story shine, is the discovery of Naoto that you don’t have to label everything, and that relationships can come in many different shapes. There’re no rules in love, only the will of those who love to make it happen. For Taichi, the lesson was to be less jealous. I wonder how this will play out in the second volume.

Ogeretsu Tanaka’s art is elegant and fresh. You’ll find yourself craving for more of her art and her stories once you finish this volume. It’s a long yaoi manga, so you’ll be enjoying 250+ pages of goodness. The characters are well done, and their problems feel way too real. You’ll be shaking your head several times because both have significant communication problems. As I said: they react more than talk. And basing everything on jus sex doesn’t work unless you open your heart and everybody knows what’s going on. Imagination is not precisely good here.

Give the series a go. It’s sweet, harsh at times, and it also makes you think a lot. Do we need to label everything? Can’t we just love for the sake of it? It also invites us to open our hearts to our loved ones. Don’t miss this jewel.

The Chilling Adventures of Sabrina, Netflix is Sweetly Haunted