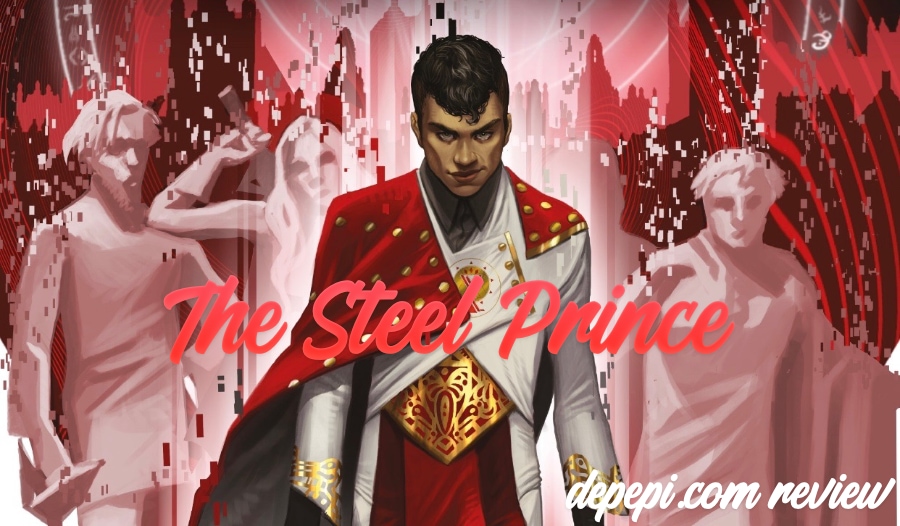 Some weeks ago I got my hands on a copy of the Steel Prince, V.E. Schwab’s A Darker Shade of Magic [The Book Depository] [Waterstones] series prequel. It’s a masterpiece and a delight to read and admire. We follow the steps of Maxim Maresh, father of Thy, and adopted parent to Kell. If you have met in the books, you already know that he can come as somewhat annoying. But there’s more to him than meets the eye. Why is he so dry? Why people say he’s the Steel Prince? We’ll discover it in a comic book, and this is exciting.

Maxim is a handsome prince with fire in his veins. He’s revolutionary in the sense that he sent out to find more Antari, the race of the magicians. His kingdom is saved because of the actions of the past. No Antari magic is to disturb how things are. However, Maxim thinks that the seals that guard the different Londons will collapse and darkness will be back again. It’s just a question of time.

Nokia Maresh, King of Red London, has had enough of his son and decides to teach him some manners by sending him to a corner of his kingdom. He’s to go to the city of Verose and wait for orders. Maxim has no other choice but to go, but he won’t let the trip go on his father’s way. He decides to enter the city on his own terms, and the first thing that happens is him coming into a fight.

Maxim is pretty good with magic and fighting, and yet he’s not fighting for his life. Is as if he has to learn a life lesson. The problem, however, it’s not the streets of Verose, but the Pirate Queen who intends to take it back. So, it seems that as soon as Maxim arrives at Verose, a great battle is about to happen, and the Prince isn’t prepared at all.

Maxim is a handsome prince, but it seems that he’s also a little bit spoiled. Thanks to the artwork we can get a glimpse of his allure. We also get to know and see more about Red London. Magic is everywhere, even in the darkest places, and you can feel it coming out from the pages of the comic book. If you weren’t sure about a visual prequel like this, just taking a glimpse at some of its pages will make all your doubts go away.

You can also pick your favorite cover. I chose the standard one for the first issue, but the next seems like a difficult choice. While I enjoy Shades of Magic, I’m glad that I’m following Maxim’s adventures on a different format: comics. Just take a look at all the covers! Aren’t they stylish?

I can’t wait for the next issue! Rhy and Kell are incredibly alluring characters, but perhaps Maxim gets some of that pour into his sons. Now we get to know more about why things are like they are in A Darker Shade of Magic [The Book Depository] [Waterstones]. What do you think about this prequel?