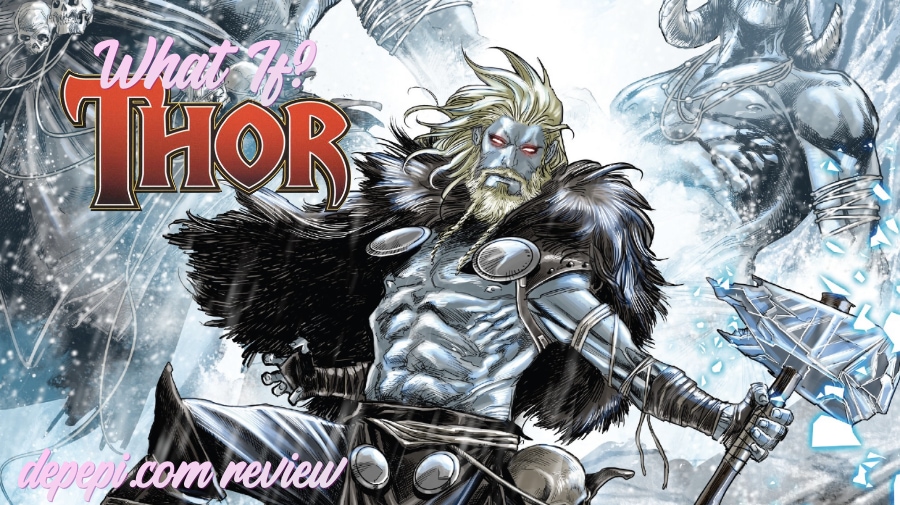 What if Thor was raised by Frost Giants? This is Marvel’s latest alternate experiment, the What If series. Would Thor be the same? What are the things that make us who we are: our nature or our nurture? Is it a little bit of both? In an alternate Universe, Odin loses his epic fight against the Frost Giants. Laufey decides to take Thor as his own back to Jotunheim because he sees that he’s violent and courageous. He also makes his mother as a hostage.

In the beginning, Thor is in pain, alone and cold. But soon he meets Loki, the real son of Laufey. He’s tiny despite being a Frost Giant, and he’s happy to see another weirdo like him. In Jotunheim nobody gives a damn about Loki. He survives, but everybody hates him. He’s not strong at all, instead, he’s gifted with magic, and Frost Giants don’t like that very much. Loki finds in Thor family he never had, so he gives him a token of their new brotherhood. You’re not alone, he says to him.

However, as they grow up, we see soon that Loki lives in the shadow of his brother Thor. Very much like what happened in Asgard, Loki living in Jotunheim has to face cruelty again. He’ll forever in the shadow of Thor, and he cannot change the mind of his father. Magic isn’t something cherished, nor an honorable thing for the Jotuns.

One day, trying to hide from everything, Loki goes to the deepest dungeons, and he finds an old lady. She happens to be Thor’s mother. Instead of telling his brother about Freyja, he decides to keep her for himself. The old lady is the one thing that makes him happy. He teaches him magic, enough to be very good at it. So much so, Freyja believes that Loki would be a beautiful warrior in Asgard.

Loki doesn’t like Jotunheim at all. He felt he had someone like him when Thor arrived. Instead, Thor gets closer and closer to Laufey. He stills cherishes Loki, but not exactly as an equal. Due to Freyja’s influence, Loki now wants to go to Asgard where he feels he’d be a team member. So, as soon as he thinks he’s ready, he proposes Lady Freyja to flee to Asgard. Loki gets her out of prison, and they go in front of the Bifrost. Freyja is able to create the passage back to Asgard, but Laufey and Thor have been spying the traitor and the prisoner.

Laufey goes with Thor to the spot to stop Lady Freyja and Loki. The first thing we have is Thor sending a deadly blow to Loki. However, Freyja ends up dead saving Loki’s life. Loki is stunned, and also asks his brother: didn’t you recognize your own mother?

But it’s Laufey who made things worse. Loki ends up killing his own father. It was either his life, of his father’s life. But Thor kills Loki’s surrogate mother. Even if Thor is enraged because Loki didn’t tell him about Freyja, the reality is that it’s Laufey who has the fault here. And yet, Thor keeps being truthful to his people, the Jotuns. Again, Loki remains the traitor.

They fight, and Thor wins. But instead of smashing his brains out, he lets him go to Asgard to have his own path. Many years pass, and the story is told by a middle-aged man to what seems his children. He’s married to a ginger woman, and he looks happy. Is she Sygyn? We’re left to wonder what will happen next.

What if Thor was raised by Frost Giants is brilliant, and I just hope they decide to keep it up. If not now, at least in the future. I loved the exploration of nature versus nurture, and the dynamics between Thor and Loki. Despite being quite a sad story, at least we have a sweeter version of the Trickster. We also have a faithful Thor, only to different people.

If you haven’t picked up this comic yet, do it quickly because I feel issues are going to sell fast. I’ll be waiting for Marvel to keep up with this story and this version of Thor and Loki. Let’s explore a different Universe!