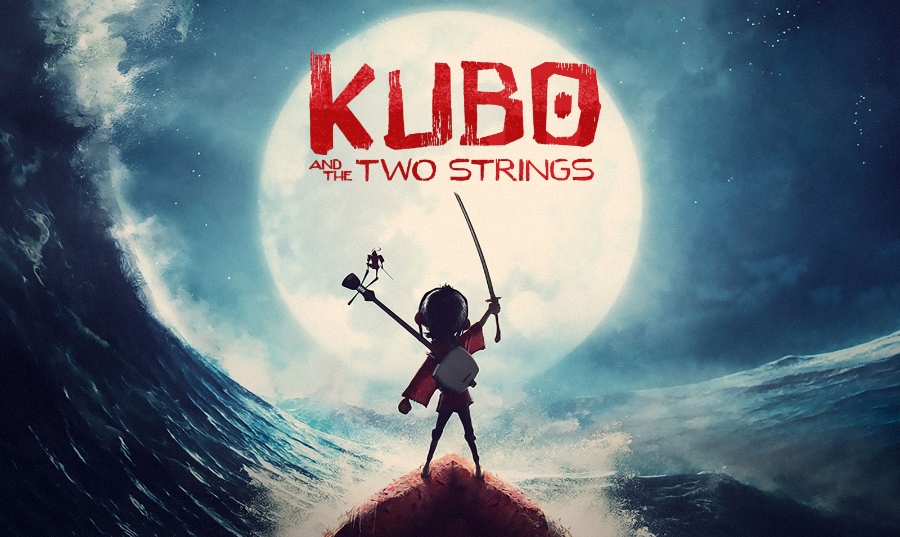 Netflix has Kubo and the Two Strings listed in its film catalog. Since I couldn’t see it in the theater, I decided to give it a go. I couldn’t be happier! It’s a delight for all ages. Beware, however, since you might need some tissues by the end of the movie. It has everything: magic, battles, monsters, talking monkeys and even a crazy beetle.

The film is as fun, as emotional. It starts with adventure, and a terrifying fate for a child and his mother. Sariatu saved her child, who is now twelve and healthy. However, she’s a little bit out of tune. He tells stories in the village to earn good money. At night, he helps his mother. In the town, he has many friends and quite an eager public.

SPOILERS: this review contains massive spoilers of the film. If you haven’t seen it yet, go to Netflix and chill before reading further.

Kubo knows some magic. He uses it while playing his instrument, a shamisen, and telling his stories. He makes paper characters for them. His origami take life while he explains the adventures of his favorite hero. He always returns before dark to aid his mother. However, during Obon, a festivity where you greet and honor the dead in Japan, he stays beyond what he should. He wants to talk to his dead father, who was a hero and who saved both his mother and him. But as shadows loom, his aunts appear from nowhere. It seems that the stories he likes to tell, about the evil Moon King who is hunting him. He wants his second eye, so he’ll leave Kubo totally blind.

He obviously panics! But his mother helps him escape. However, his aunts kill her. Kubo has two charms: a monkey and his paper-made hero. When he wakes up after the battle where his mother used all her magic to save him, he finds a huge female monkey in front of him. She speaks! The monkey tells him that the magic of her mother woke her up. Her mission is to protect Kubo. But he needs to find three pieces of armor so that he can defeat the Moon King before he takes his eye. Kubo’s world has been shaken to the core, and now, it’s him up to an adventure and not his origami puppets.

While they’re searching for the treasure armor, they find a Beatle-Man. He’s enchanted and with amnesia. He recognizes Kubo’s insignia and thinks it belonged to his master, so he joins the group. He’s going to help Kubo, and flirt with the Monkey. For some bizarre reason, they react and do as a couple. The Beatle and Monkey help retrieve the armor, but not without troubles. For starters, his aunts end up wounding the Monkey. She’ll inevitably end up dead. The Beatle isn’t in a good position either.

It goes as bad as to have the Moon King appear, and trash Kubo’s village. But Kubo has the armor, and he’s ready to battle the Moon King. He’s his grandfather and wants him to go back to the Moon. He doesn’t want him to have emotions, he wants him to be eternal. But Kubo doesn’t want to give away his eye and forget everything. He loves his mother, and he does love the people in his village, so he decides to defend those. The Moon King is enraged. So he fights becoming a dragon. But at the end, Kubo wins, and the Moon King becomes human and without memories. Kubo tells him that he is a charming good old man so that he’ll be such a man.

The most emotional part of the film is when we discover that the Beatle and the Monkey were his parents. They were both enchanted, and now they can go knowing that their child is safe. As it seems, they died, but magic kept them alive in different shapes to make sure that Kubo could defeat his grandfather. However, we can see that he wants his parents, and so he wishes to be next to them. After all, he’s just a kid. Even if his magic is great, and his stories amazing, he still yearns for his parents.

It was also a great surprise to see how Kubo didn’t kill his grandfather. Instead, he decided to make him human so he would understand that humanity isn’t a curse. Being blind to emotions made of him a tyrant, disconnected from the world. Now, being a human has a shot for redemption in the village he wanted to destroy. In fact, that Kubo decides to give him a new purpose talks volumes about his character and a big heart.

This is a movie for the whole family. Prepare some tissues if you’re prone to cry with animation movies. If the Lion King made you weep, Kubo will make you weep double. It was entertaining, fun, but also incredibly touching. So, this is worth the shot. Plus, if you think about all the amount of work this movie has behind you’ll get more into watching it. These puppets are moved frame by frame, and then some effects were added with the computer. It’s mind-blowing to think about it. Can you imagine how long it took to move all the characters into the different scenes?

Kubo will be happy if you decide to watch his story. He has two magic strings: his mother and his father. They’ll always care for him whatever happens. And his grandfather has a shot for redemption. What can give more?

Copyright: Images on this post (C) Kubo and the Two Strings / Memes & Gifs (C) by their owners.