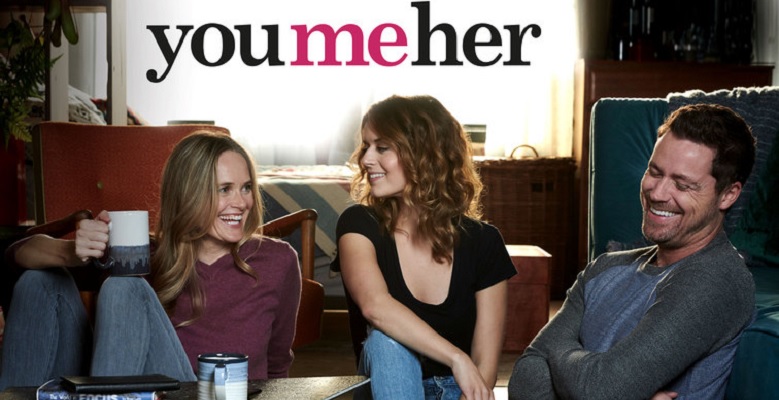 You Me Her is a polyamorous romantic comedy that is rocking Netflix. When I saw the first and second seasons, I had mixed feelings. Although the show is hilarious, the only thing that I can complain about is the lack of communication between the characters. They’re impulsive, and they get into trouble very easily. But that’s what makes the characters so compelling. This is the first show on polyamory that I see. A suburban married couple enters a romantic relationship with a younger woman. What started as something to spice things up, turns out to deep love. Jack and Emma want to have a baby, and frankly, they’re somewhat “bored.” When Jack goes to an escort, Izzy and Emma finds out, things get funky.

Jack, Emma, and Izzy start a love story that will rock the neighborhood. Jack and Emma seem to be the perfect couple, but now they’re changing lifestyle, and some friends are uncomfortable. However, by the second season, Jack and Emma get their friends to accept their new situation. Izzy has more luck on her side since her best friend is more comprehensive (although she has a horrible character as a person.)

SPOILERS: if you haven’t seen the show, you better stop reading more about it. However, I cannot pass across all the funny scenes of it. Even if you know what’s going to happen, how the characters act and the messes they get into, are all gold.

By the end of the second season, Emma freaks out and accepts a job out the town. So, she leaves Jack and Izzy. When the third season starts, we find out that Emma has a girlfriend. Jack and Izzy are living together. Both are heartbroken and trying to get their lives back. To do so, Jack and Emma are divorcing. But signing the papers of the divorce isn’t an easy thing. Jack isn’t talking about his feelings, and Izzy thinks of a plan: get Jack and Emma together in a room, and maybe they’ll end up talking about what happened.

Instead of talking, they end up making up. When Izzy arrives, she finds them kissing each other. So, instead of going for the divorce, or talking, they end up making up, the three of them. Jack and Izzy think that everything is going back to normal, however, Emma freaks and abandons them again. Izzy tells Emma that if she goes now, she’s gone forever. Emma doesn’t listen to her anymore and goes. This makes things spiral for everyone. However, there’s a shock: Emma finds out she’s pregnant.

That’s massive news for Emma, and she starts re-thinking everything again. But, she’s messed up so badly with Jack and Emma that’s not going to be comfortable at all to make them reconsider. Emma ends up approaching Jack because he’s going to be more open to listening to her, mainly because she’s pregnant. However, they decide to keep Izzy in the dark for the time being.

Izzy has to deal with her father, who appears in her life again. He was an alcoholic, and now he wants to be her dad still. He needs redemption, and she needs to talk to him and have him back. While she deals with that, she also deals with Emma.

Things get really messy, and in the end, they get back together. However, Emma is still thinking about her job and moving out. But Izzy now has a job, and she wants to have a life besides being with them. So, she tells them that she wants her career, and she’ll accept whatever Emma decides. But she won’t move if Emma agrees with the job. Both Jack and Emma go to Seattle for the interview. But Emma decides that she prefers to stay in the relationship. So, they won’t move.

By the end of the show, Jack and Emma propose to Izzy. They’ll be together, and the baby will have two moms. I hope that the second season will be focussed more on how their relationship progresses and how their lives will be with the baby.

This show is good showing up how people react to polyamory. It’s exaggerated in many instances: remember this is a comedy. However, I think it might happen depending on your location. For example, when Jack, Emma, and Izzy go to the suburban crepe shop, people in the shop get uncomfortable, and even the waitress goes there to ask them not to make a scene. They were just holding hands! However, in the center of the city things are more open, and they seem to be okay.

I found this comedy very funny. However, don’t expect great things from a show that has very short episodes. You can binge it pretty fast! In fact, it leaves you with the feeling of wanting to know more.

There are also side-stories with Jack’s and Izzy’s friends. You get a peak in different types of relationships, and that’s cool. Although we understand the main story with polyamorous characters, you also get to follow a couple with kids where the mom wants to work. You can see how it can be stressful to change plans within the couple, and how some people think about working moms. You also get Izzy’s friend trying to choose love for a guy, or love for herself.

If you’re open-minded, this comedy might be right for you. Episodes are very short, and so is each season. But, it’s highly entertaining, and it’ll make you think about love, work, and life in general.

The Mighty Thor: Loki, NO!

Be Smart When You're Your Own Boss: Learn To Rest