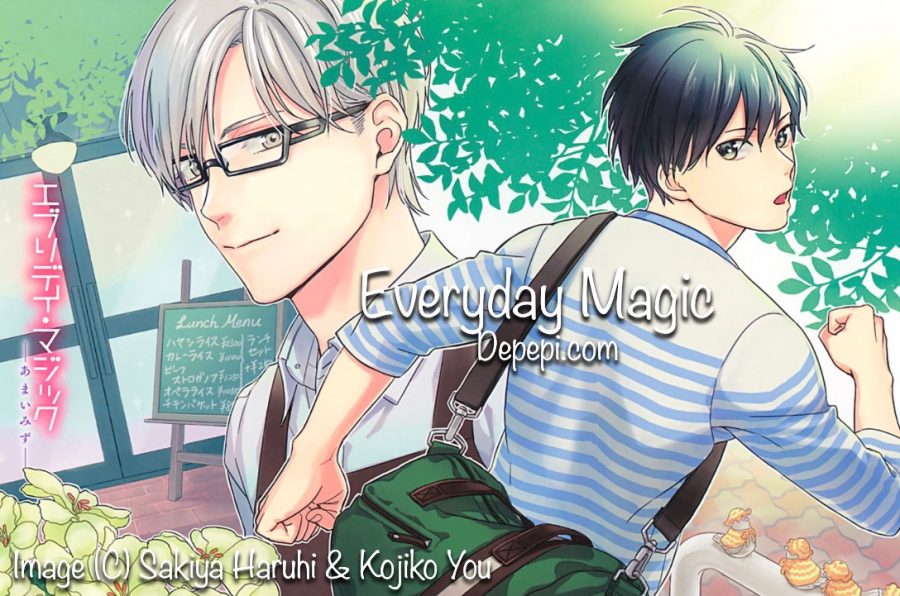 Everyday Magic is a sweet yaoi manga by Sakiya Haruhi and Kojiko You. It explores the angst of youth when discovering sexuality. Mitsuya is in his last year of high-school. He’s sweet, but he’s worried about being gay. Fate brings him to a quirky coffee shop where a half Japanese, half foreigner works. He’ll change his world sweetly and quietly.

This is obviously a BL manga. However, since this is only the first volume, and the second isn’t out yet, I don’t know how deep the sexy scenes will become. So far, I found this to be super sweet, and I recommend it. [I found it on eBook Japan.]

NOTICE: this post contains SPOILERS and MATURE content. Follow with discretion. The pictures that are juicier have an NSFW note. [Yaoi / Drama / MxM / Slice of Life/ Romance/ BL]

We begin the story with Mitsuya running towards the station. There’s a group of angry boys following him. When he arrives at Kamakura, it starts raining, and he has no umbrella. Depressed, he decides to stop by a coffee shop he hasn’t seen before. There he meets the only worker: Reiji. He’s a half Japanese, half foreign handsome guy. He’s very kind with Mitsuya, and soon he starts trying to cheer him up.

Reiji notices that Mitsuya is depressed and that something happened to him. Mitsuya also notices the coffee shop arrangement and the worker. Mitsuya has a ring, and before Reiji stars digging up, he decides to make sure Mitsuya trusts in him. It turns out that Mitsuya had an issue with bullies. A guy he liked, Junki gave him a ring. But when a group of people found them, he said he did it for fun, and they all started to laugh and call Mitsuya gay.

In the last moment, he reacted and turned the tables. He started by saying that he knew it was all a game, and that he thought he was fooling a gay. The bullies that felt that they were getting fun, suddenly got angry and started chasing Mitsuya. Reiji listened to Mitsuya’s story, and then he tried to soothe him. It wasn’t his fault. In fact, he was also targeted for bullies in the past. Then, when Mitsuya was feeling better, they started chatting. And Reiji decided to call Mitsuya, Cider-kun.

They continue chatting, and Reiji ends up inviting Mitsuya. It turns out, Cider-kun turned 19 years old. Soon, Reiji takes out the apron and sits next to Mitsuya. And to his surprise, he asks him out. Although he’s still in love with the bully, he decides to accept Reiji’s offer. Mitsuya hasn’t been in love before, and before he could even have his first kiss, he was bullied for being gay. He’s apparently afraid of the fact and also concerned because Reiji is older than he is. Still, he decides to go along, and they end up having the first date in Enoshima.

Reiji is very handsome, and Mitsuya is impressed. We can read all his thoughts and insecurities about what he’s doing. We can also notice that he has no idea whatsoever about dating either. And, he’s also a little bit paranoid. Will people around them see that they’re gay? Despite all these fears, he decides to go to Reiji’s home to get a meal. Reiji cooks very well. He also offers to him to pick up a cup. It turns out he has a great collection of very expensive ones. Mitsuya cannot go past the idea of breaking any of those costly cups, so he asks Reiji for a cheap one.

Reiji gets closer to Mitsuya again, and he makes him a little bit nervous. Then he explains to him about his schools days and how guys in his class bullied him and another kid. However, he was bigger, and he could help. That’s why he doesn’t like bullies. He opens his heart to Mitsuya, while he gets more and closer to him. And, finally, he kisses him and touches him a bit.

Mitsuya feels like he’s in front of a wild animal. Scared, he pushes him away. Reiji apologizes and tells Mitsuya that they can take things slowly. While Reiji is older and does have experience, Mitsuya has no idea. Days after, he goes to the coffee shop and asks Reiji out. So, they have another date. Mitsuya is still concerned about the people around them noticing that they’re in a relationship. At a certain point, Reiji kisses Mitsuya in public and shows to him that nothing happens. No one noticed about it at all. Everything is fine.

Reiji does like Mitsuya. But Mitsuya is still doubting, and it shows up. Despite having a better date, Reiji is taking things slower now. And Mitsuya’s doubts are starting to eat him up in a different way. We’ll need to wait until the second volume to know how their relationship evolves.

This is an adorable BL manga. It’s very slow, but the artwork is really lovely. Also, Reiji is very handsome, and he pops up amazingly from the panels. I haven’t found any English version for the time being. But, if you are interested in reading it in Japanese, you can check eBook Japan.

On the go: Blogging (and Writing) on an iPad Pro