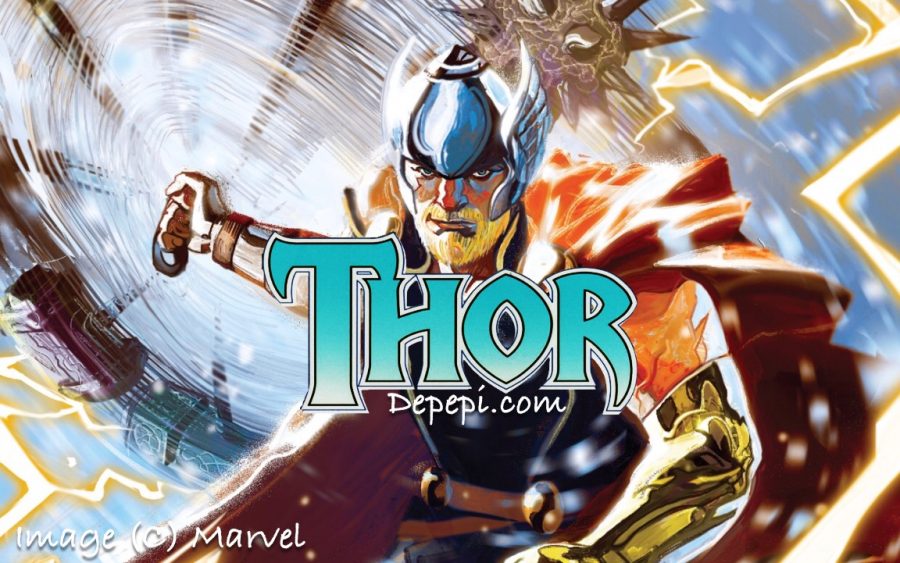 Thor [The Book Depository] [Waterstones] is back as the God of Thunder reborn. After Asgard exploded, and the Mighty Thor stopped being Thor, he’s back to protect Asgard and the Asgardians. Heimdall is working on fixing the rainbow bridge. Until then, most of Asgardians, Elves, and other creatures are in Midgard’s Bronx. Lady Freya is there tending to the sick and trying to do her best. Odin is in Asgard.

Thor doesn’t have his hammer. Instead, he has many hammers that use Odin’s magic. So, he can smash them on his enemies. He’s back because the Universe needs a Thor to be alive.

SPOILERS: this review has massive spoilers from the comics. This new Marvel series has a lot of potentials. Plus, the artwork is just amazing. I love the color palette and all the style.

When Asgard exploded, Asgard’s weaponry vault was smashed. All the weapons disappeared and now are all in all corners of the Universe. Thor is trying to bring them all back home. But it’s not an easy task. To begin with, people are used to the Mighty Thor, who is a woman. Then, it should be easier to fight him since he’s weak. Or, so that’s what Thor’s foes think. But there’s more to Thor than a Mjolnir. He has Thunder in his heart, and he has the help of his father and his mother. Apparently, he needs some tricks to make it happen. Just hammering things isn’t enough.

Now, instead of having one hammer, Thor has hundreds. The main problem is that he breaks them on his enemies’ heads. So, he has to ask the Dwarves to create more weapons for him so that he can fetch all the others. Odin looks tired, and although he’s helping with his magic, it’s obvious that his views are very depressive. On the other hand, Lady Freyja wants Thor to team up with Loki. Thor want’s to smash Loki’s head and kill him. The problem is that Freyja loves his son, and she protects him. Loki will help him, and he is the God of Stories. However, Thor loses his temper very quickly.

So, Thor goes about his mission entirely ignoring his mother. Thor will have to trust Loki again to a certain point. He needs magic. Just smashing and hammering enemies isn’t enough anymore. Although Thor has learned a bit about strategy, he still isn’t good at creating spells. So, it’s evident that he’ll need some kind of help. When he finds Loki drinking his mead in his boat, he goes mad. Loki wonders why he has so many weapons. (It’s evident that he already knows, by the way.) Naturally, Thor ends up beating the hell out of poor Loki. But, the trickster has magic, and he intends to do what he was sent to do: opening bridges to where Thor needs to go.

While they fight, Loki sends Thor to Hel. But, Thor is quick and takes Loki along. He doesn’t trust Loki at all, and he’s all the time threatening Loki. However, soon they find Balder, King of Hel. Thor’s dead brother comes like a savior. But, is he indeed at their side, or are they set to be tricked? It’s funny to have Thor and Loki together again. What it’s not that fun is having them in such bad terms again. I’d like them to be closer, and making fun of each other. They’re a great duo, and I enjoy them a lot, in the movies and in the comics.

Thor [The Book Depository] [Waterstones] God of Thunder Reborn promises a lot of fun, especially with our favorite trickster. I’m also amazed by the artwork of this comic book. The colors and lines are staggering. And both Thor and Loki make a great team together. I wonder what will Loki do next, and who Thor will smash next.

Copyright: Top image on this post made by dePepi with (C) Marvel images/ Images (C) Marvel