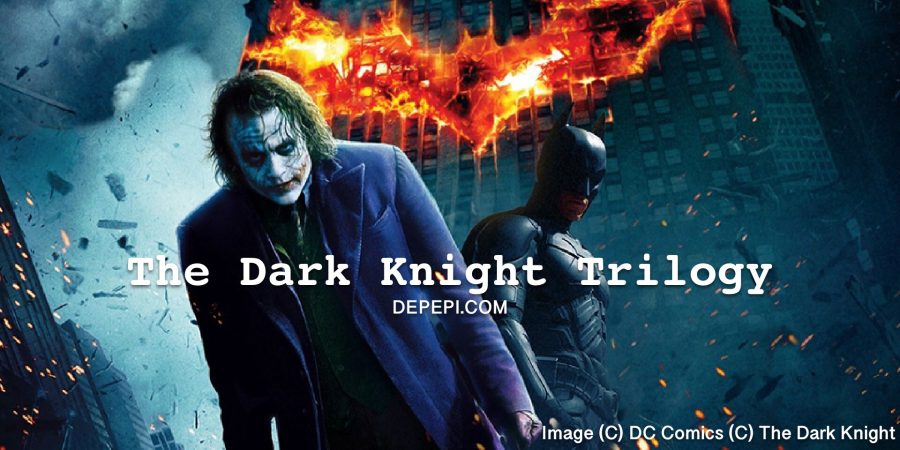 I was surprised to know that my sweetheart hadn’t seen Christopher Nolan’s The Dark Knight Trilogy. For me, Nolan’s trilogy has the right Batman and Joker. In fact, when I think about the Joker, Heath Ledger’s version pops up in my mind. So, to solve this, and also to celebrate the movies, we saw them all. Although it might be surprising to me, some people have no idea about this masterpiece. So, if you are reading these lines, and have no idea, think about enjoying the movies.

SPOILERS: This blog post has massive spoilers of the trilogy. Stop here if you don’t want to be spoiled. And yes, this is the best Batman. (My opinion is totally biased.)

The trilogy starts with Batman Begins. It’s a great start, and a great way to understand who Batman is. As a kid, Bruce falls into a well, and he finds a cave plenty of Bats. After that incident, he has a fear of the animals. When Bruce and his parents go to the theater, a thug robs them. Before escaping, he kills his parents, leaving kid Bruce with an empire, and in the hands of his faithful Butler.

Young Bruce ends up traveling the world until he finds Ra and trains under him. However, he’s not really an assassin, and he messes up with Ra’s organization. First, he thinks he has killed him, but then we discover that he’s alive (and not the person Bruce thought). We also get to see how Batman gets all his gadgets and from where. And, we get to know why his parents were murdered.

This is a masterpiece, with villains, intrigue, and an excellent beginning for the Batman. However, he’s a loner. And he still needs to come to grips with his Bat identity.

In the Dark Knight, the Joker creates chaos throughout Gotham. First, a gang robs a bank. The gang members kill each other, leaving the Joker with all the money. He’s smart and knows how to play. District Attorney Harvey Dent is helping Gordon in cleaning all the crime of Gotham. Because of the actions of the Joker, Dent ends up becoming Two-Face.

The Joker kills Dent’s girlfriend in an explosion and Dent survives. But one half of his face is burned. He goes rogue, and he kidnaps Gordon’s family. Batman ends up killing him and makes a deal with Gordon so that they can have peace in Gotham. From that moment on, Batman is an outcast.

IN the Dark Knight Rises Batman has vanished and is thought to be a villain. Gordon is old and has prepared a resignation speech where he tells the truth. However, before he can do so, Bane appears to destroy Gotham. That was the mission of Ra’s al Ghul. We won’t know until the end that he’s not Ra’s son. It turns out that Ra had a daughter.

Batman comes back, but he’s out of shape and weak. Bane banishes him into a prison where he was. However, Batman is able to escape after much training. In the meanwhile, Gotham is taken by Bane. The whole city is isolated. There, Robin, Gordon, and Cat Woman are trying to survive. And then Batman comes back. He dies a hero, and Gotham cherishes his great vigilante.

I won’t spoil the trilogy further. This version of Batman is darker from the previous ones. The movies were a hit, and very famous. DC Comics was on the rise on the big screen, and Batman was the dark hero that kids dreamed of. So much so, that the image of this movies Batman and his villains are the ones that come to mind.

However, the movies aren’t free from critics. If you’ve been following this blog for a long time, you already know that I’m a Marvelite. When I think about Batman, the Dark Knight Rises into my mind.

It’s true that the depiction of Cat Woman is weak. Despite it, most of the characters are strong, and they have left a long shadow. Superhero movies have taken good notes of Nolan’s trilogy. You can compare the trends in the genre comparing the films before and after this great trilogy.

This Batman was dark, and Bruce was cheeky. A masterpiece that lets you see that even Superheroes are just human. Bruce has a lot of money and can do with his tech whatever he wants. His privilege allows him to become the masked vigilante.

If you haven’t seen this trilogy yet, do it. I binged all the trilogy, and that meant a whole Saturday of pizza and chill with Batman and foes. I had a lot of fun and a lot of beer. And it was brilliant. For me, the trilogy brought back many memories from the past.

Have you seen the trilogy? Who is your favorite character? (Although I like this Batman the most, I must confess that the Joker wins my heart.)

—-
Copyright: Top image on this post made by dePepi with an official (C) DC Comics (C) THe Dark Knight image / Memes & Gifs (C) by their owners.