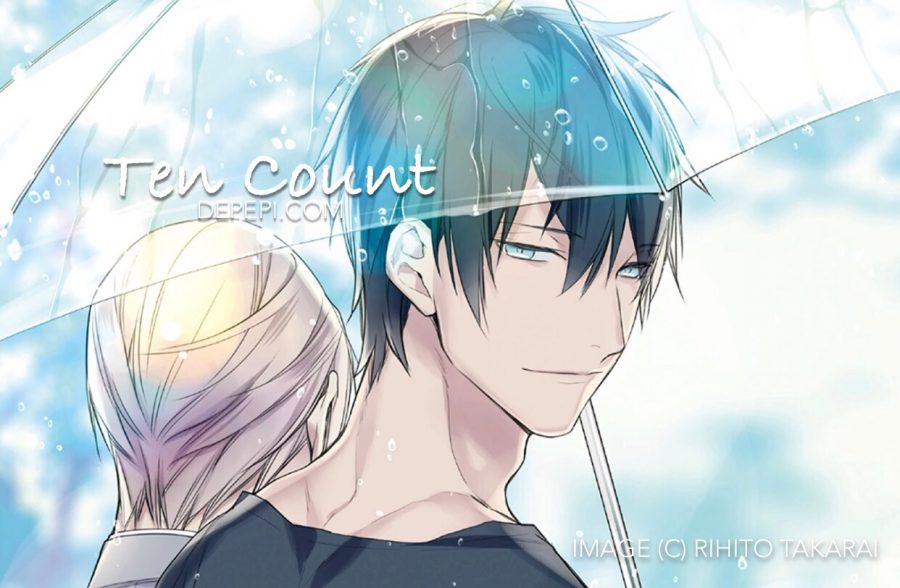 We left Shirotani and Kurose trapped in an elevator in Ten Count [The Book Depository] [Waterstones]. Now, they’re free again. However, Shirotani wants something more. He ended up kissing Kurose’s hand. Although he hesitates on what to do next, he ends up asking for sharing a taxi with Kurose. That’s a huge step, since Shirotani usually does things alone. His misophobia doesn’t let him live comfortably, but now he wants to smash those boundaries because he feels a lot for Kurose.

This volume is highly emotional because we can take a look at Kurose’s past, and also see his weaknesses. It’s a little bit strange to see him vulnerable when we’ve been following Shirotani’s weak spots.

NOTICE: this post contains SPOILERS and MATURE content. Follow with discretion. The pictures that are juicier have an NSFW note. [Yaoi / Smut / Drama / MxM / Slice of Life/ Romance]

When the taxi arrives to Kurose’s home, Shirotani decides to jump off the taxi and follow him. Shirotani asks Kurose about following him home. Kurose is going to make a mess out of him if he tells he loves Kurose. Despite knowing what will happen if he goes to Kurose’s appartment, he follows him there. Shirotani’s reaction is actually very cute. He’s so sweet and so lost at the same time. Kurose looks like he’s in perfect control of the situation.

Kurose taunts Shirotani by taking his hair and smelling it. Shirotani hesitates, but still goes with it. As soon as they get in the room, Kurose starts touching Shirotani. First he kisses him on his foot, but then he forces him to touch himself. Again, during all the sex scene here, Kurose seems in perfect control of everything. Shirotani needs Kurose to tell him that he’s a good boy, but what does Kurose need?

We travel back in time when Kurose was a kid. His parents weren’t much at home. His mother was cold and more worried about her beauty than her kid. And his father was highly engaged with his job. In short, Kurose spent most of his time alone. One day, he broke on purpose the window of a guy. It turned out to be a man with misophobia. But, at the time, Kurose only thought he was an odd man.

Nishigaki had misophobia and worked from home. As soon as Kurose started to bother him, he felt he had a burden with the kid. However, he started to want to get better. If he didn’t get a better job, soon he would be homeless.

Kurose felt comfortable at Nishigaki’s home because he paid him attention. However, soon Kurose started to touch him, and soon after Nishigaki disappeared. He had bought a book to learn more about this man, however his mother reacted very badly. First, she said she wasn’t interested in reading anything. Then, she suggested that Nishigaki had commited suicide. For a child like Kurose, that was a shock. The first thing he thought was that Nishigaki’s disappearance was his fault.

Now, Kurose is trying to help Shirotani. But his weakness is feeling alone. He has a great fear to be left behind like when he was a child.

Although Kurose seems completely in control all the time, reality is that Shirotani is touching Kurose’s weak spots all the time. First, he wanted to cure Shirotani. But he felt in love with him, and things went out of control. He realized that Shirotani wanted Kurose to defile him. And so, he did his best. However, now his worst fears are at play. He doesn’t want to be left behind, and he is desperate to have someone to love. He’s very much the same as when he was a kid.

It’s interesting to see the parallels in both characters. Both Shirotani and Kurose have felt alone for a very long time. In Shirotani’s case, his loneliness and trauma triggered his misophobia. In the case of Kurose, his loneliness and trauma triggered his will to cure someone in the future. This is how their destinies were set. Shirotani is way weaker than Kurose, that’s easy to see. However, Kurose also has his own weaknesses.

“Don’t throw me away” is a huge statement that Shirotani doesn’t undertand. He hasn’t seen Kurose’s vulnerabilities until now, and he’s surprised. Before he can tell him “I love you,” the alarm sounds. When Shirotani returns to work, he looks happy. In fact, his coworker, Mikami, tells him that whoever made this change needs to know all about it. So, Shirotani starts thinking about it and sends a message asking Kurose to a date. First he writes a very long message, and then an easier one. You can see now that he’s more and more invested in their relationship.

Ten Count [The Book Depository] [Waterstones] is better by the volume. The feelings on the page jump directly to your heart. It’s also very dramatic. Both Kurose and Shirotani should be happy and be together. However, Shirotani needs his time. However, while they’re going out on a date, a female character appears and notices them. Remember the girl who provoked Shirotani’s trauma? That’s the one. I wonder what will happen in volume six!

Although this is a yaoi manga and has many sex scenes, its strength is its ability to show the trauma of misophobic people. They are trapped in their own bodies, and in many cases they do want to socialize. This yaoi manga is a jewel. If you love yaoi manga, give it a try. It not only feels that the story has a natural flow of its own, it’s also deeply engaging.