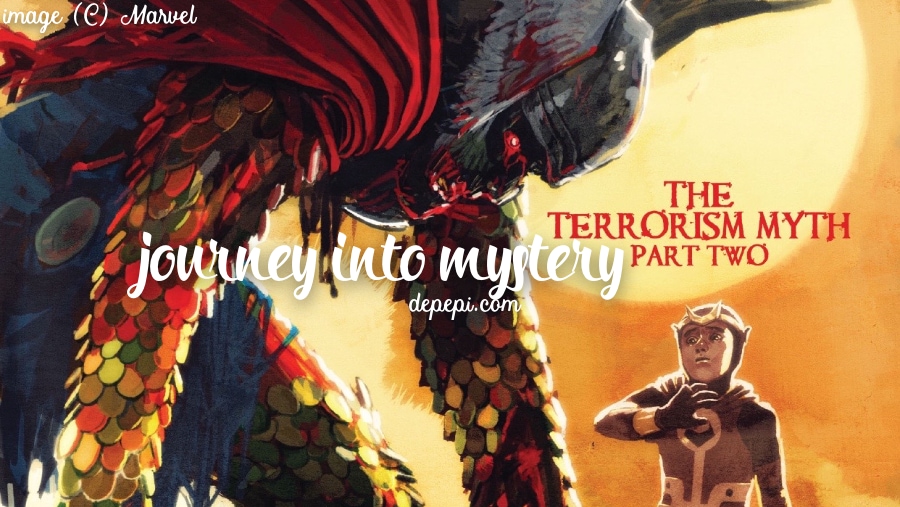 Loki, Journey into Mystery [The Book Depository] [Waterstones] gets more interesting with the Lord of Dreams. Loki, Daimon, and Leah are about to find out what´s behind all of those nightmares. But, to do that, they have to sleep and let Loki enter into his own dream. And that might be a problem because Daimon could see what´s hidden in Loki´s heart.

Even if no one else believes it, Loki does feel horrible about Thor´s death. He feels responsible, also if he did the right thing. Being a hero isn´t easy, and Loki is just discovering the hard truth about heroing around.

But before Loki and Daimon team up, Daimon tried to kill Loki. He believed he was the source of all the evil going around in the world. But then, Leah appears to save Loki, and they have a funny conversation that only teens would have. Daimon is suddenly shocked. Is the Trickster talking about the internet? Let’s face it, the God of Mischief is an entirely different individual. He’s not the same, and right now he’s trying to make the best he can. And even if he’s using trickery, his reasons are good.

So, the trio teams up so that they can find the source of all evil. However, their plan is quite dangerous. While Loki dreams, Daimon will hack it and go with him to whatever the source is. And, if needed, Leah will inject him with something to make him wake up. The plan looks fancy until you find out that you need a needle to wake up. If Loki can’t wake up, he’ll die in his nightmare.

And the nightmare is hideous. He finds a wrathful Thor that demands his blood. He also sees a Hellhound in his dream and all types of other monsters. Loki is frightened, and he feels guilty. However, he’s healthy enough to be able to escape within the dream.

Then, he finds a castle and Leah. While taking a look at the castle, he ends up decapitating Leah because he realizes that she’s not the real one. And then, he puts her head on his as if it were a hat. It’s then that he can see what’s really going on. The Lord of Dreams is the one that wants to kill Loki. In fact, he exists eating the fear of those who have nightmares. Because there’s no one around to control him, he has spread like a disease. And he has set his eyes on Loki. To eat fear from him is very powerful. However, he’s been found out, and now Loki can tell Daimon what’s going on.

Because Loki can’t wake up by himself, Leah ends up injecting him with a cocktail in his heart. Naturally, Loki wakes up in pain. But now he can share everything about what he found out. There’s just one thing he won’t share: his guilt about Thor’s death. He lost his brother doing the right thing. And that stings.

The Lord of Dreams is harvesting all fear to create the ultimate weapon. So, they have to stop him. Loki has a plan, and I bet it’s a mischievous one. But, for the time being, he’s not sharing it with the rest of the team. What’s in his mind?

Loki, Journey into Mystery [The Book Depository] [Waterstones] is showing a different take on Loki. He’s still as mischievous as always. However, he’s trying to be a good person. Because of who he was before, people are wary of him. Those who are close to him are starting to realize that he’s not the same. And because he’s different, he feels terrible in losing his brother. It seems that he has trauma and won’t be over it any time soon.

Copyright: Images on this post (C) Marvel / Top banner made by dePepi with a (C) Marvel image.

Invest in Yourself. It's a Good Idea.