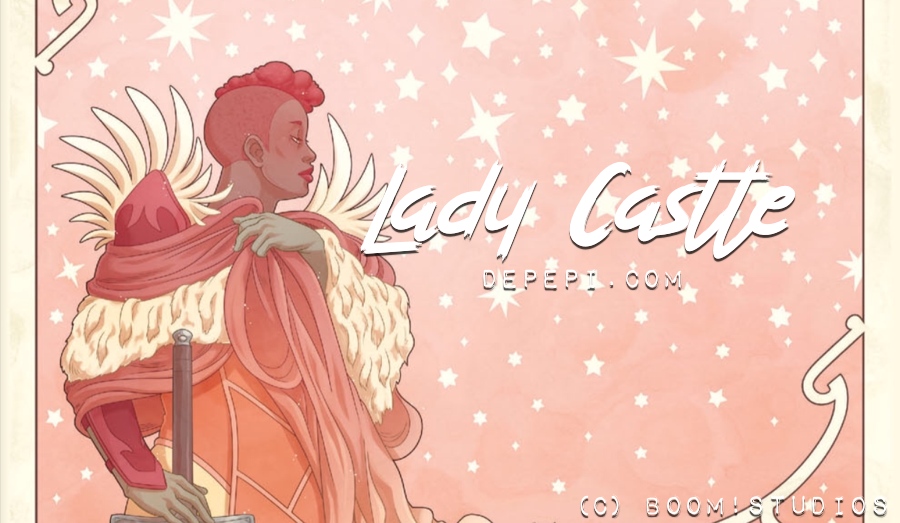 LadyCastle [The Book Depository] [Waterstones] is a great comic book that lets us imagine a world where we can explore how women would rule. When King Mancastle and all his men decide to go on a crusade and get killed, all the women in Mancastle must change things. First, the name. Now, LadyCastle is going to change the rules, but despite being happy about it, running a castle isn’t that simple.

The Princess that was imprisoned in a tower until she married turns out to be a night. And the ironsmith’s wife becomes the Queen. First, they are all a little bit overwhelmed by the new tasks. But soon they come up with great ideas, and they get rid of unjust rules that they had to follow because of the men in their lives.

There’s only one man left in the kingdom, and it’s a very old guy. He tends to go back in time and voice his opinion. However, he soon realizes that things can be done in very different ways. The castle soon has the first trial: they’re attacked by fire salamanders. First, they all get into battle mode, but soon they find out another way to deal with them. Instead of killing them, they find a home for all of the salamanders, and in exchange, they have extra lights. Since these are magical salamanders, they provide excellent light for everyone.

Then, they’re invaded by werewolves. Before going bananas, they end up in the library where they discover the librarian. Because she had a disability, the King ordered her to hide away. Now, the new Queen tells her to own the place and to come up with her. And they start preparing for the werewolves, all of them. They end up putting all the beasts in a trap. Instead of killing them, they trap them in the tower.

When the morning arrives, they enter the room, and they find lots of men naked. They give them dresses, and they let them go. After this funny episode, they all come to terms with what happened to their men and decide to have a funeral for them.

After the salamanders and the werewolves, harpies decide to knock on their door. Harpies go from town to town taking whatever they want. Instead of going to war with them, they choose to hold a party. Here we can see how many women misunderstand other women. The dialogues in this part of the comic are brilliant. They need the help of the ladies of the Court, and so they get it.

We also get to know an Arabic physician, who has Arabic gum. They ask her help from her as well. It turns out that the harpies don’t know how to make friends. So, the women of LadyCastle make an agreement with them. They’ll teach how to grow plants, and they’ll also have friends if they decide not to attack them.

So far, so good. But then the dark night arises. He takes hostage the Princess-Knight’s little sister. To make matters worse, the Princess-Knight is now under a spell. She looks like a monster. Her hair is snakes, and her eyes are dreadfully red. And if she stars at someone, they’ll turn into stone. To recover her sister, she agrees to a duel-competition against the dark knight.

She loses the first round, but she manages to get into her sister’s place. So, the dark knight doesn’t have her sister anymore. But, he’s still after the castle and all its inhabitants.

After so much noise and battles, we discover that the Dark Knight is but a witch who encountered King ManCastle and his men. She’s but a victim of his ruling, and she decides to lift all the curses from the women. Now, they can manage themselves, without any magic looming on their heads.

This is a fantastic and uplifting comic book that shows you, funnily, how unjust patriarchy can be. And how collaborating with everyone has way better results than just arguing and going to war.

This comic is perfect for all types of public. It’s funny, but it has a great message inside: women are very capable of doing the same tasks as men can. And, there are more ways of doing things than just one. This is quite relevant if we think about how things are at the moment in the world. I’d love to have had this comic book when I was a kid. The Princess saves herself by becoming a Knight. I think that’s a compelling statement. It’s also great noting that the clash of different types of women is just made up by society and not by the women themselves. Finding it in the comic book is refreshing.

If you like badass princesses, courses, magic, and a very diverse cast, LadyCastle [The Book Depository] [Waterstones] is for you. It’s sweet, but it’s also a little jewel plenty of positive messages. Have you read it? If you were one of the women in the castle, who do you think you would be?

Invest in Yourself. It's a Good Idea.