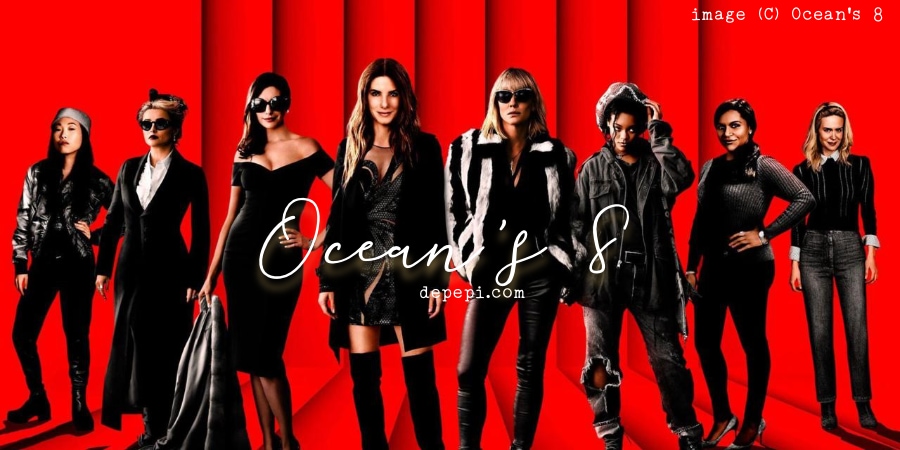 The past week was crazy, so instead of blogging I took a rest and went to see Ocean’s 8. I went into the movie without many expectations, and I enjoyed it a lot. First, I was glad to have such a team of different women plot one of the best cons in movie history. And second, I fell for Cate Blanchett again. She was gorgeous as Galadriel in Lord of the Rings and lethal as Hela in Thor Ragnarok. But in this movie, she kicked ass in high heels, and had me swooning during all the movie! She plays Lou, the partner in crime of Debbie Ocean, the sister of the infamous Danny Ocean.

Debbie has a beautiful family of super thieves. If you’ve enjoyed the movies with Danny Ocean, I’m pretty sure you’ll enjoy this one with his sister. Perhaps you’ll be happier taking a look at a badass team of women kicking ass, being smart, and rocking some fantastic fashion looks. The best is that they’re all different from one another.

SPOILERS: this review contains spoilers from the movie. I also fangirl quite a lot about Cate Blanchett, but you already deduced that from the introduction of this post. So, let’s put on some stilettos and let’s start with our heist!

Before we start talking about the plot, I’d like to talk about the different characters. First, we have Debbie Ocean. He has spent the last five years in prison serving a sentence because her ex-boyfriend betrayed her. While in prison, she has thought about the perfect plan to get filthy rich and do what she does best: plotting a heist. She is cool, sophisticated, and great at conning people. In short, she rocks is smart, and won’t stop stealing any time soon.

Lou is a gorgeous creature fallen from Heaven. She spends her days watering vodka until Debbie re-appears again and convinces her to put a team together for the perfect heist. She’s super cool, very queer, and a motorbike Queen. Her fashion style is the best of them. Well, that’s the one I love the most. She looks perfect even dressed as a cook!

Anne Hathaway plays Daphne a celebrity that is about to give you headaches for the rest of your life. Despite her shallow appearance, she isn’t that dumb. So, be prepared to have an awesome surprise for her. You’ll hate her first, then hate her more, and then you’ll be like: right on.

Helena Bonham Carter plays Rose. This is by far the funniest character of the team. She’s quirky, with a flair for drama. She’s a designer with hideous problems. However, she’s essential to make things happen for the team. In the beginning, she seems to be aloof, but soon you’ll see how well she plays with the help of Debbie and Lou.

Amita is a jewelry maker. She’s a great professional, but she’s being pushed by her mother into getting a husband. She’s methodic, focussed, and works fast and well. Plus, she doesn’t get nervous or anything. She has no idea about technology, and it shows when a team member tells her about Tinder. It’s a funny scene, don’t miss it.

Then there’s Tammy, a mother with surprises hidden in her garage. The family thinks she’s making a profit buying and selling stuff from eBay. But the reality is far from the rosy lie she told them. She’s also very elegant.

Rihanna plays Nine Ball, a sassy hacker. She’s cool, funky, and brilliant. We have no clue about her real name. All we know is that she’s Nine Ball, and so does the team. She kicks ass in technology.

And then we have Awkwafina as Constance. She plays the pickpocket in the team. She’s also sassy and very quick. She’s the one that shows Amita how to use Tinder, although her ways are very straightforward. (Sending eggplants as a greeting on Tinder is somewhat quick, isn’t it?)

All these women are very different from one another. Their different personalities show in the movie, and in their fashion choices. We also get to see a team of women put together their brains to steal something beautiful. Debbie wants to take a $150 million Cartier necklace from the Met Gala (and some other jewels in the process). They only have five weeks to put the team together and make it happen.

While we get to know each character, we also see how well they play together. Debbie and Lou are fantastic at helping Rose do her part. She’s very quirky and gets lost easily. So, expect to have lots of funny scenes with Rose, while Lou and Debbie try to keep her on track. We also get to see Nine Ball deploying serious hacking in the movie. And, we get to see that a very organized mum is capable of getting all the information and dresses.

The first thing we discover, however, is the reason why they’ll end up stealing such an impressive Cartier piece from the Met Gala. It’s not because of the fashion, or because of the place. It’s merely because is what’s Debbie does best. So, instead of trying to rob a bank, she goes to where jewels will be exposed more easily.

The movie isn’t as fast-paced as you might think. There are moments where it’s slower, and it’s so to give room to all these fantastic characters. But when the action starts, it’s impressive. It’s all fashionable, and funny. If you love fashion, I’m sure that you’ll enjoy the movie and the heist. It’s incredible, and only something to exist in the film, but it’s brilliant anyway.

As I said above, my favorite character was Lou. I loved her, her style, and all about her. She was always dressed on point, and even when she was on cooking robes, she looked gorgeous. So, in the end, it’s your character that makes the fashion, more than the fashion which makes the character.

This is a comedy to enjoy with friends. I found it short because I was enjoying myself far too much. I just hope that we’ll get more Debbie Ocean’s movies with this excellent team. Needless to say that everything ends well. But, as we know with Ocean’s films, they can return in the most unexpected ways.

Have you seen the movie? Which character did you like the most?

A Guide to Yaoi Manga: The Basics [2]

LadyCastle, or How Things Work if You Let Women Rule