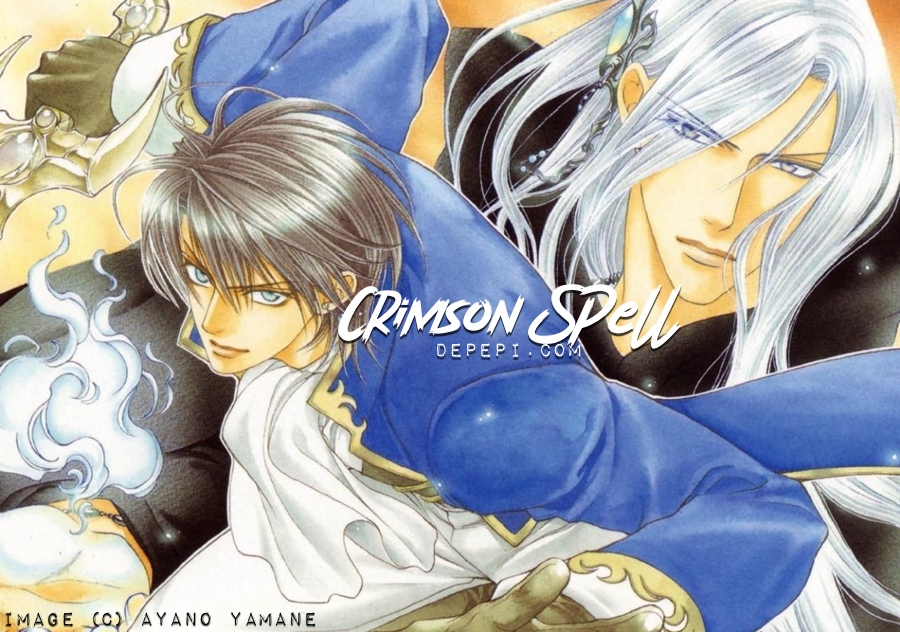 These two weeks are crazy. However, Crimson Spell [The Book Depository] [Waterstones] saved me. This yaoi manga gets more and more interesting, and in the extras, there’s a hint to the future. But, let’s start at the beginning. Vald ended up fighting Rulca, and now the bunny has no energy left. Havi doesn’t like Limris. Although it might seem that it’s pure jealousy, the truth is that Vald tends to trust people too quickly. Limris appears to be another wizard, and Havi doesn’t trust him because he thinks there’s something shady in him.

It turns out that to help Rulca, they need to feed the bunny some evil fruits. There’s just a problem, they need to find a dragon to give them up. Limris tells so to Vald, who jumps into action without asking anything to Havi.

Vald is young, energetic, and has little experience. We can see that easily thanks to all the troubles he ends up in. Despite Havi giving him quite good advice, he ends up doing whatever he wants. Perhaps he does so because he’s a spoiled prince. The thing is that he jumps into aiding the bunny without saying anything to Havi, and he ends up putting himself at risk. Again, the team has to go behind him royal ass to see what’s going to happen next.

What happens next is Vald in a trap along with Limris. It’s pretty evident that Limris is curious about Vald and there’s more to him than meets the eye. Vald cannot see that because he wants to do good whatever the cost. And that’s how he ends up in a trap.

Hunters created the trap for a big dragon. Vald tries to free the dragon, but he goes to extremes. He does so at the expense of his own life. Luckily, he has the power of the demon Vald. But, perhaps all his behavior and eagerness to put himself in harm’s way is a mixture of the demon’s character pouring into him, and his stubbornness in not accepting that he loves Havi.

Whatever the case, Vald ends up freeing the Dragon and giving Rulca the magic fruit that saves the rabbit. There’s only a problem: Havi is very angry.

When they arrive at the town gate of Vaala, things start going astray. First, the gate is closed because there’s no wizard to create the seals for safe passage. And second, Havi leaves it clear that if Vald doesn’t need him anymore, why should he bother? He decides to take a position as the wizard to create the magical seals. Now Vald has to taste his own medicine. He acted on his own without asking anything to anyone. Now it’s Havi who is doing so.

At this point, we can easily see that it’s a struggle of egos. Both are very stubborn, and none of them want to say I was wrong with the other. Hence, things seem to go nowhere at this point.

That’s until Havi gets the job. Suddenly Vald is all insecure. What if Havi leaves him? Did the treasure allure him enough to decide stay? It can’t be since Havi belongs to Vald! So, imagine Vald’s mental struggle while he sees Havi going deeper and deeper into the new job. He goes on a parade, and he has even a party on his honor.

Vald tries to go and talk to him. However, he’s stopped at the gates. Only women can attend the party. At this point, things get interesting. Vald crossdresses as a woman and gets into the party with the aid of Limris.

He’s so well dressed, that the host of the party gets infatuated with Vald. Even when he defends other girls from danger with a sword! There’s apparently something fishy with Vald-lady, but the host doesn’t notice anything. The host tricks Vald into a room arguing that Havi is there. However, he wants to take advantage of him. It’s Limris who puts the host of the party to sleep and dream about such beautiful lady until Vald finds Havi.

When Vald finds Havi, he pretends to be a girl. At first, Havi doesn’t recognize him until he’s close enough for the wizard to realize he’s in front of a crossdressed Vald. He’s shocked at first, but soon they start talking about their feelings. Obviously, Vald complains. But then it’s Havi that tells Vald how selfish he’s been. He’s a spoiled Prince who doesn’t take into account the feelings of others. Havi only wants him to take better care of himself, and since Vald told him not to do anything romantic with him, Havi is hurt.

While they talk, they come closer to each other. Then, Vald complains and tells him that if Havi doesn’t do as he wishes, he’ll retaliate. At this point, they end up kissing.

In the end, they end up making love in a very passionate way. But when Vald comes, he shows angel wings. Just at that moment, the demon Vald appears to greet Havi. So, Havi ends up making love to both. Demon Vald is very calm this time, not quite a beast. He’s very accommodating. It seems that both personalities are blending little by little.

Demon Vald cannot talk. He only grumps and bites. Havi tried to ask him about the angel wings, but he couldn’t answer at all. Instead, he was all kisses and caresses.

The creepy thing here is that Limris is watching everything from a window. So, they’re more than master and servant, he says. Limris has had flashes of memory from the past, and he seems to be connected with the enemy wizard. So, who is Limris exactly, and what does he want?

And, what happens next is very funny. Rulca, Halrein, and Mars end up on the balcony with both of them. Havi asks the team to bring Vald to safety while he works. At this point, it’s obvious that everyone knows what these two are doing. To try to deny it is useless. So, Vald should stop having this mental twists and accept Havi forever without starting to sulk again.

So, Havi ends up giving all the magical seals, including one to Limris. Havi lets him go, but he’s sworn to keep an eye on the wizard because he’s very fishy!

I got the English volume of Crimson Spell [The Book Depository] [Waterstones]. However, you can get extras in the Japanese magazines. One of this extras is about the gate in the town. It has a spell that if you try to go to the other side, you’d be trapped in an illusion. The team gets caught in such a fantasy. Havi is living with a very open-minded Vald. He’s finally accepted Havi in all his glory, and now they live in a castle, and they love each other every single day.

There’s only a tiny problem: Vald isn’t quite like himself. Havi starts questioning Vald’s personality. He can be very aggressive, and he seems to be able to use magic. In the end, Havi starts looking around the castle, until he finds Demon Vald. When he tries to talk to him, he can see that he’s not quite like himself either. He’s too quiet, and he has far too many manners.

It turns out that both personalities have been switched and put in the wrong Valds. So, Demon Vald is in Vald’s appearance. And Vald is in Demon Vald’s. So, to break up this new curse, Havi has to love them both at the same time. This leaves us with a very hot panel at the end of the extra adventure. And I think this is a hint for the things to come.

Vald has angel wings, something he didn’t have before. Although Demon Vald and Vald have very similar personalities, both are different. So, maybe we end up with some sort of twins. And Havi might end up with two Valds at the same time.

The artwork is superb. Crimson Spell is a delightful fantasy adventure. I like that it’s a weird type of Hobbits going to Isengard, mixed with sexy vibes. Vald is naive, but he’s growing. For some reason, I don’t think that he’ll ever settle and won’t get into any troubles. He’s a troublemaker, and he’ll end up in more and worse situations. I’m pretty sure that Havi will need to help him again and again until the end of time. What do you think?

The Mighty Thor: Surprising No One, Odin is a Douche

So, I went to Oxford