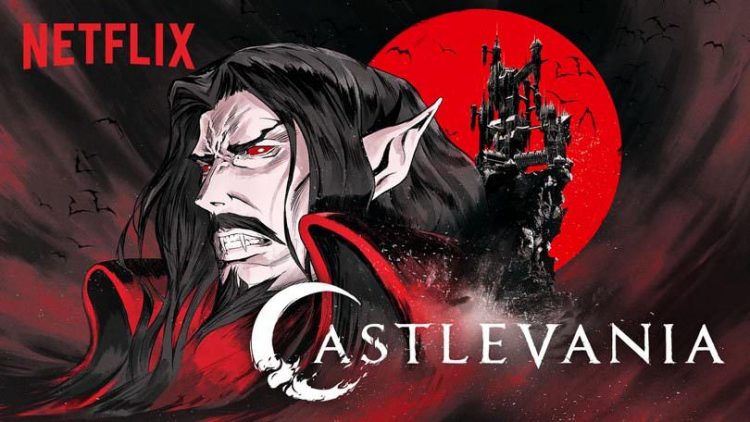 Castlevania is a Netflix masterpiece that will thrill you. This show is based on Konami’s video game Castlevania III: Dracula’s Curse from 1989. One day Vlad Dracula gets a visit in his castle, an intelligent young woman called Lisa who is seeking for scientific knowledge. They fall in love, and they marry. The next thing we know is that bigots burn her at the stake. As soon as Dracula arrives at the town and discovers the deed, he goes mad and curses the land. Expect lots of monsters killing hundreds because of a horrible Church.

The people of Wallachia are cursed because they didn’t stop the zealots from killing an innocent woman. Dracula’s wife was charged with witchcraft. However, she was a scientist. When everything seems lost, a disgraced demon hunter called Trevor Belmont enters into the picture.

SPOILERS: this review contains some spoilers from the show. If you haven’t seen the show yet, and if you do mind spoilers, please stop reading here.

Trevor Belmont is unsurprised with all the monsters around. In fact, he cares little because he was doomed by the people who he’s supposed to protect. However, that some people are blinded by bigots doesn’t mean that they’re all terrible. He ends up teaming up with magician Sypha Belnades, a cool girl. And they end up teaming up with Dracula’s half-vampire son, Alucard. Dracula has gone rogue, and he doesn’t care about humanity anymore. But his son does.

The show is a mayhem of monsters and fights. However, where it shines more is showing the clash between bigots and open-minded people. Advances in science were seen as black magic by many during the middle ages. Castlevania feeds from this and puts it into extremes with monsters and fights.

You’ll end up hating the Bishop, and all his horrible zealots as much as you start to question Dracula. Acting just for revenge will only make things worse. The problem with hurting supernatural beings like Dracula is that he can bring hell on earth.

The show is dark, and it has lots of deaths. I don’t recommend it for children, but it’s an excellent choice for young adults and fans of the video game. The artwork is refined, and stylized. Plus, the voicing cast is impressive as well. All characters get an incredible voice that fits them well.

Despite all the horrors on the screen, I can assure you that it’s hard to stop watching the show. Dracula is heartbroken and ready to doom everyone for the sin. However, his son doesn’t think that way. Please remember that Alucard is a child of both worlds, and he does have humanity in him. He’s willing to sacrifice himself to save everybody else.

Belmont is clearly an antihero. He’s as detached as he can be, and he’s just acting because he knows it’s the right thing. However, his ways aren’t exactly clean. From all the team, perhaps Sypha is the nicest of all. She isn’t that naive, but she brings fresh air to such a gloomy world.

Castlevania doesn’t disappoint, but it makes you wonder what will happen next. Each episode seems exceptionally thoughtful despite its short length. Remember this is animation, and it means that episodes aren’t that long. Give it a go, it’s terrifyingly beautiful.

A Guide to Yaoi Manga: The Basics [1]