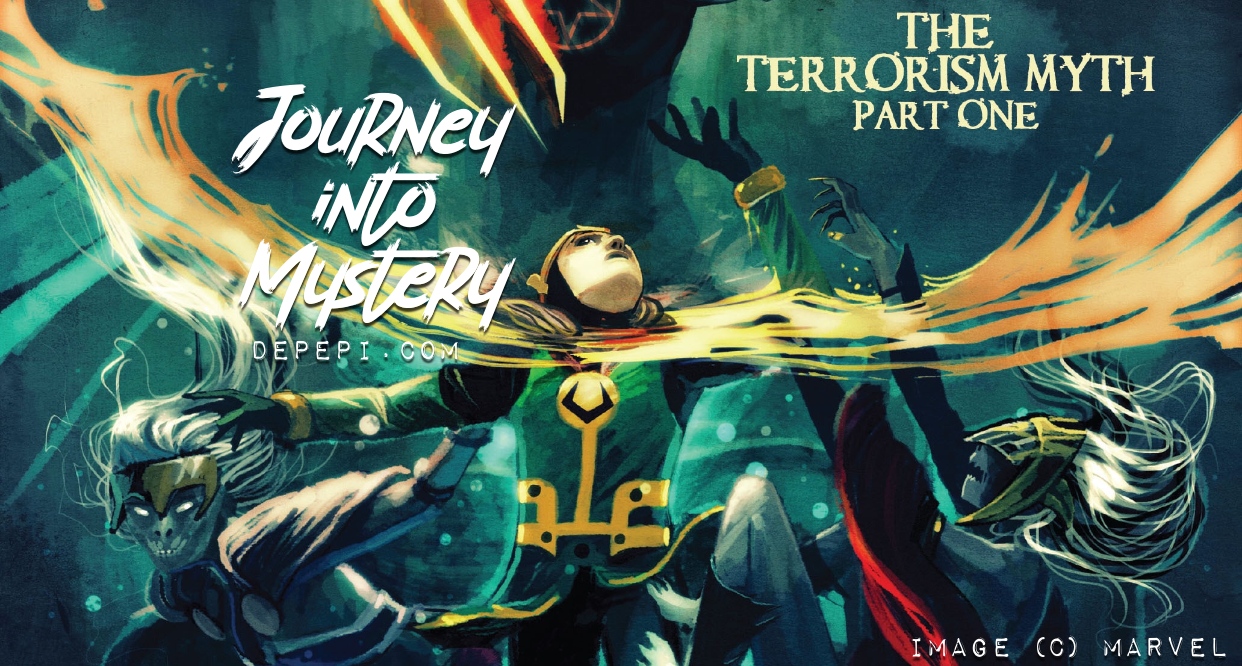 Loki, Journey into Mystery [The Book Depository] [Waterstones] comes late this week. Loki is having nightmares with Thor. While all seemed right, there’s something amiss in this new Asgard on Earth. Loki walks his new pup Thori and teaches manners to Leah. However, his new friend doesn’t know how to ignore bullies. So, when a human bully tries to get advantage of Loki, she totally trashes him. Obviously, all fingers point to Loki, and the All-Mother asks him to ask for forgiveness.

But those are the least of Loki’s troubles. He has hideous nightmares where Thor appears in front of a castle. But he isn’t the only one. Across the world, many people are having similar nightmares with the same manor. In Poland, a teen girl is having the worst nightmare of all when a weird dude knocks on her home’s door.

He looks like a vampire from Hell. His name is Daimon Hellstrom, and he is an exorcist. However, he needs an invitation to the house to be able to help the teen girl. The dad’s hesitation makes him late. He gains knowledge though, on what the source might be. Meanwhile, in Broxton, where the new Asgard is being rebuilt, Loki is in full nightmare mode. Luckily, Ikol wakes him up before the nightmare kills him.

It’s a horrible nightmare where Thor comes back to Loki only to complain and to deal with him. However, when he wakes up, Ikol tells him to go and take a look at what’s going on. So, they go to the ruins of the Serpent’s Asgard because it’s there where it all might have started.

So, following Ikol’s advice, he ends up in a trap. They’re not the only ones in the place: Daimon is there too. And he decides to attack Loki because he thinks he’s the reason people are having nightmares. Little he know, Loki isn’t the one causing the nightmares, but one of the many kids having them.

So, here we’re, in the ruins of the Serpent’s Asgard, with Loki in middle of a mess. This time, it seems that even if he tells the truth, Daimon won’t believe it!

It’s amazing that we get to discover Loki’s room in Journey into Mystery [The Book Depository] [Waterstones]. I expected something more comfortable, to be honest. Instead, he has a straw bed and books all over the place. The room is humble, closer to that of a low ranking individual, or a poor earthling. I don’t think Loki can choose easily though. The All-Mother seems to enjoy comfortable rooms, while her son is in a hut. I’m not exactly sure how to take this.

Also, we get to see more about Leah and how she’s managing adapting to Earth. The world of the living is proving to be quite of a challenge for her. And it’s fun.

What’s not that fun is Lokis’ nightmare. He already named a Hel-pup Thori in honor of his brother Thor. Now, he has nightmares with his brother turning on him. It’s obvious that Loki misses Thor. Even if he doesn’t (or can’t) show it up publicly, he feels guilty because Thor is dead. Whoever is causing him to have such hideous nightmares is obviously playing with Loki’s guilt. Even if it wasn’t his fault, he feels responsible.

Copyright: Images on this post (C) Marvel / Top image made by dePepi with a (C) Marvel official image.

Sense 8 Finale, for the fans