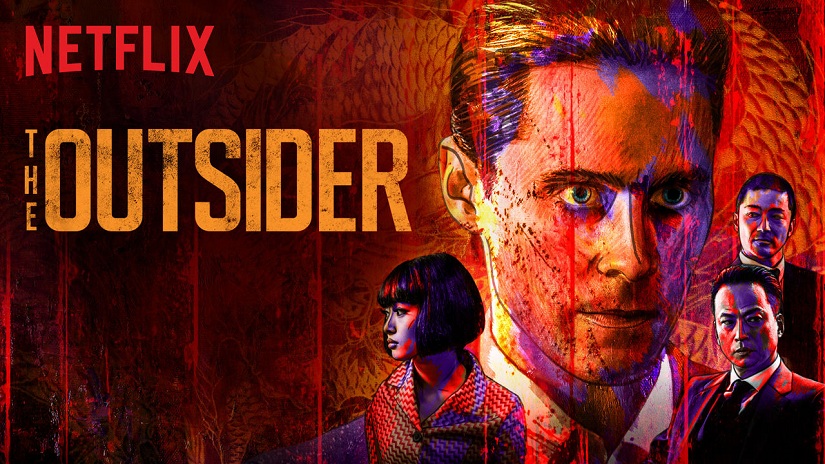 After having the Outsider on my Netflix list for a while, I finally saw this yakuza story. It’s dark, bloody, and entertaining. But it does have some issues regarding the Japanese culture. Despite all its flaws, I enjoyed seeing Jared Leto play a crazy dude in Japan. We follow the steps of Nick Lowell, an American living in prison in Post War Japan. He was an army member, and he found himself in jail. And we have no clue why. One day, while cleaning the loo, he saves the life of a Yakuza. Kiyoshi and Nick become friends in prison. But things aren’t easy, and he proposes to him something that can get them both out. Nick helps Kiyoshi, and then Kiyoshi pulls strings and pulls him out of prison.

From here on, we enter into the Yakuza world from the eyes of Nick. It’s highly unrealistic that Nick could go up in the Yakuza ranks so quickly, especially in the time-frame the film is based on. So, don’t take this yakuza film as a historical-based one. Instead, try to enjoy it from a “fantasy” point of view.

SPOILERS: this review has massive spoilers from the film. Be open to see some cultural aspects of Japan from a different perspective. Be also open to see how Leto’s character is a “weeaboo.”

Kiyoshi is played by none other than Tadanobu Asano. He’s super cool, loyal, and amazingly friendly for being a Yakuza. He takes Nick under his wing and introduces him into his yakuza family. So far so good. However, Nick is a little bit more than eager to enter into his clan. The movie seems quite okay portraying Nick’s difficulties and shock with the Japanese culture until we discover his eagerness to be more Japanese than the Japanese. Although many have seen this as a failure of the film, I see it as a great example of what a weeaboo is. He’s an “extreme Japanophile” who takes the surface of Japanese culture to the core and brings it further. For example, instead of chopping off one finger for his mistake, he chops off two of them. Was it necessary? Not at all.

Nick understands some Japanese at the beginning of the movie. And he speaks none at all. By the end of the film, he’s competent. The time that elapses from going out of prison to going up into the yakuza family ranks is a short one: two years as a maximum (and I’m very generous here.) The portrayal is very unrealistic. Not only he ends up understanding incredibly nuanced and register-changing Japanese, but he also is able to perform more ruthless actions than the others.

Not only he goes up in the ranks quickly, but he also seems to be the boss at the end of the demise of his family clan. It could be interpreted that his brothers’ bowing reverence means that he’s the boss now. Or, you could take it as just acknowledging that he did well in getting rid of the mole that provoked the demise of the yakuza family clan. Whatever the case, it’s easier to take the film and Nick’s trajectory as a fiction and an excellent depiction of what white men might feel when living in Japan. Not all men end up being captivated in such a fashion, but some are trapped in a fable, and so they perform as such trying to be more than the Japanese. The parable consists in them being triumphant. But, the reality isn’t exactly like that.

The movie is amazing with the environment and depicting its time. Cars are amazing, the fashion is too, and we get a glimpse of Post-war Japan in Osaka. However, you can see that it’s a very superficial vision. Nick gets a Japanese girlfriend early on. She happens to be Kiyoshi’s sister. He ends up being a key member of the clan, and he ends up almost having it all. And it all sounds to me very much a “charisma man.” The white dude gets the Japanese girlfriend and ends up saving the day because he’s more capable in understanding Japanese culture than the Japanese themselves. This is a great stereotype of white men that end up living in Japan. But, does this make this movie a bad film? Not at all!

After all, you’ve stated above, you still liked the movie? Well, yes, I did. For starters, it’s entertaining. I had fun with the set of the story, the tattoos and seeing how fantastic the whole idea of going up so quickly in Yakuza ranks seemed for Nick. It’s incredibly unrealistic, and yet I enjoyed the fable. In reality, however, I doubt very much that any yakuza clan would have a white member in the high ranks that easily, without knowing much of the language and grasping the culture in such a way. One of my friends, who is married to a Japanese, needed years and years of hard work until he could earn his rightful place within his own family (not yakuza, just an average Japanese traditional family.) And when I say years, count them by the tens, not with one or two fingers.

And lastly, I loved the combo of Nick and Kiyoshi. Kiyoshi was a saint, and he didn’t need to die to make Nick go rogue. So, if you want to enjoy the movie, take it for what it is: a fable where Nick enjoys one of the most anthropologically exciting countries in the world. This is not a Japanese tale about the yakuza, but a western fable of what we think they might be. Enjoy the environment of the movie, enjoy Leto giving you the creeps, and above all, enjoy Asano as Kiyoshi.

So, do I recommend it? Yes, if you have some time to kill and want to discover stereotypes, fables, and taking a peek into Japan. Again, this is not a Japanese movie about Yakuza, but what the West thinks it might be.

—
Copyright: Images and gifs on this post (C) The Outsider (C) Netflix.

Sense 8 Finale, for the fans