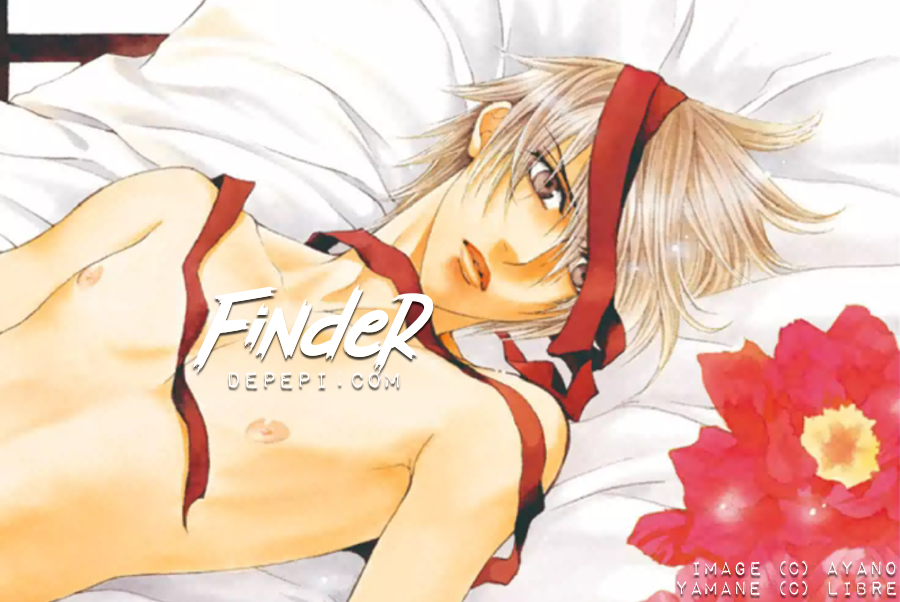 Finder In Captivity [The Book Depository] [Waterstones] is a compelling yaoi manga. We left Akihito in the hands of Fei Long. Now he’s in Hong Kong, in a cage. Fei Long has no idea what he’s going to do with Akihito at first. Tao, a kid under Fei Long’s protection, is the one in charge of taking the meals to Akihito. Their interaction is quite funny. At first, Tao hates Akihito because he thinks that his master has been injured because of him. But after some events, they make friends with each other. Still, in the beginning, Akihito needs to deal with a very jealous little brat who is eating his food.

But things won’t be easy for Akihito for long. Fei Long plans to steal him for good from Asami. And so, he begins his quest of instructing Akihito. That means a lot of rape and forcing him to do what he wants. Whatever Fei Long has in mind, Akihito still thinks about Asami. It seems that the efforts of Fei Long to steal Akihito’s heart away from Asami are useless.

Fei Long starts marking Akihito with a tattoo on one of his hands. Akihito is his property now, not Asami’s. Obviously, Akihito is angry and complains, but soon he feels lost. Fei Long is ruthless and tells him that he can either accept his new situation or he can sell him off to some other people as a male whore. He promises a life of him hooked on drugs and dirty and fat old men as his owners if he doesn’t behave as he wishes. You can imagine Akihito’s fright. However, he’s still convinced that Asami will come for him. But, he does have his doubts.

Since Akihito isn’t in the task to give real pleasure to Fei Long, the mafia boss ends up covering Akihito’s eyes. While he’s at it, Asami can only think about Asami. He finds Fei Long cold and heartless, while Asami is warm for him. Fei Long keeps his game trying to mine the idea that Akihito has of Asami. However, for the mafia boss’ ruthless words, Akihito always ends up in Asami’s arms, even if it’s only in his thoughts.

One day, he finds his door unlocked, and he decides to take a walk. He ends up in an alley, and lower thugs from Fei Long’s organization find him. The first thing they do is to push him onto the trash and kick him. When they’re about to shot him, his “bodyguard” appears and saves him. The guy is a trusted subordinate of Fei Long, but he also happens to be a double agent for Asami. Akihito doesn’t know it. When he’s being led back to his room, he finds his old t-shirt in the trash. It’s dirty with Asami’s blood. At that moment he realizes that Fei Long is just playing with him. Asami isn’t like him at all. So, he decides to go back to Japan, to Asami.

So, instead of going to his room, he starts running. Tao sees him flee while he’s taking out some trash bags. Akihito runs like the wind until he cannot anymore and stops for a while. No one seems to be after him. When he stops in front of a shop, he tells the owner to be quiet. Instead, the man gives him money. He saw Akihito’s tattoo on his hand, and now he thinks he’s paying the mafia. With no other choice, Akihito takes the money and goes away. He realizes that he has no way to go. Staring at his tattoo, he decides to try to swim back to Japan. Tao happens to be nearby and thinks that Akihito wants to kill himself, and yells for him to stop. Then they start to talk.

When Akihito tells Tao all the bad things, Fei Long has done, Tao cracks. He doesn’t believe him and starts crying. Akihito can’t stand seeing a kid cry, so he soothes him and decides to go back to Fei Long. Basically, he does it for Tao.

The double agent tells Asami, who is in Hong Kong, to be a little bit more patient because he can’t give him Akihito yet. In the meanwhile, Akihito finds himself bound again, and in a meeting along with Tao and all the mafia clan. Someone has stolen from Fei Long, and he’s trying to figure out who. Tao notices one of the men with a gun and confronts him. The man pushes Tao, and Akihito puts himself in the middle to save the kid. He does, but the man is about to kill Akihito. Thankfully, Asami’s double agent stops him.

After leaving Tao in the hospital, Fei Long and Akihito have a conversation in the car. While Fei Long is trying to steal Akihito from Asami, it’s Akihito who is winning Fei Long’s heart. Fei Long wants Akihito to entertain him once they arrive back at his room. Fei Long is naturally pissed, mainly because things aren’t going his way. He realizes that instead of stealing Akihito, it’s the brat who is messing up with his head. And so, he forces Akihito to please him again in the room. While he does, Akihito can only think about Asami. He knows he’s messed up in the head, and still, he can just think about Asami.

The double agent ends up finding a way for Asami to get Akihito back. If Asami gets a deed over a casino owed by Fei Long’s father, then Asami has points to get Akihito back. Fei Long is attached to his father. Once Asami gets his hands on the deed, he phones Fei Long. And Akihito is in the room when that happens. Fei Long is first surprised, but then he talks with Akihito and the brat strikes in the mafia boss’ heart again. Akihito cries for Fei Long. He sees that he’s too stubborn with Asami, and if they both talked, they would sort things for sure. Now, the only one who is being wounded again and again is Fei Long.

So, Fei Long agrees to the exchange with Asami. There’s only a small problem in all this: the Russian mafia. They’re not going to stay quiet knowing that the Hong Kong mafia boss and Asami have a personal feud. They’re going to use Akihito to get to both of them and gain more territory. So, the day when the exchange is going to be done on a yote route to Macao, things get messed up. Akihito is in danger again. One of the men that accompany him is a mole, and he ends up crying up loud to Asami. The mole is taking him to the Russians!

In the meanwhile, Fei Long is notified about what happened. But just in time for Asami to appear in his back, angry like hell, and telling him not to move if he doesn’t want a bullet in his skull. Fei Long thinks Asami might have taken both. It seems that the Russian mafia move is working.

Finder [The Book Depository] [Waterstones] was pure angst during all this volume. I can’t wait to know what happens to Akihito, and see how he’s going to get away from the Russians and go back to Asami. It’s obvious that Yamane-sensei doesn’t want her readers to breath for long since she packs all her pages with action, sex, and deeds. It’s true that this yaoi manga is rough and terrifying at times, but the story is compelling, and it suits the topic. Mafia is scary, and their world isn’t an easy one.