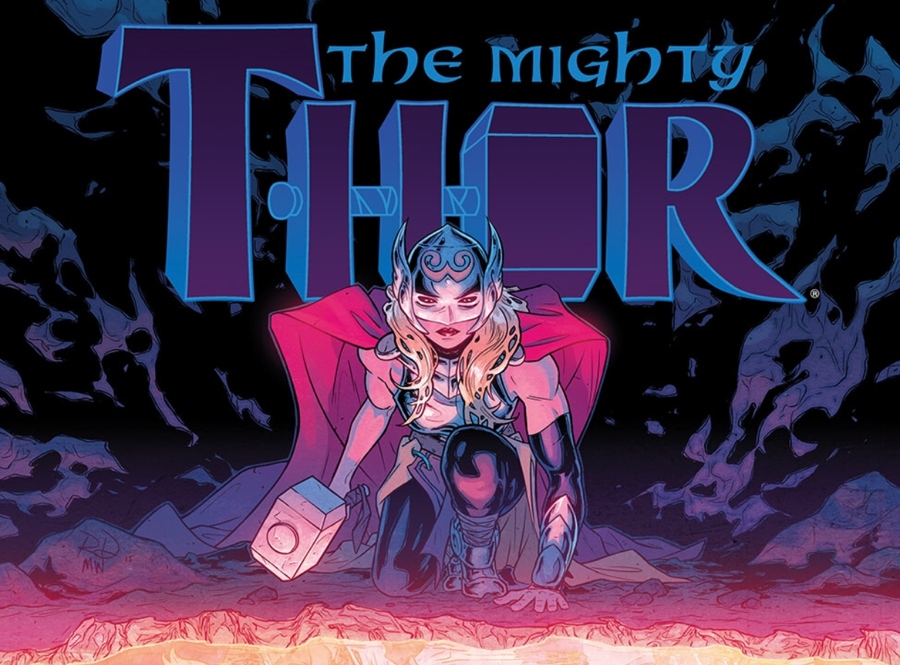 It’s THORsday! This week we’re taking a look at The Mighty Thor [The Book Depository] [Waterstones]. Loki just met Thor to talk. Before we get in-depth with their clash, I want to note that the Loki featured in this comic looks like Tom Hiddleston. I guess it’s a marketing move to make heroes and villains look like the actors that portray them. However gratifying this might be for many, I prefer Loki to look at the Agent of Asgard version. Don’t get me wrong, I love having the Hiddlesversion in a comic book. There’s just a catch: my brain travels to the fanfic realm.

Thor meets this new Loki, and because she’s not up to talking at all, Loki ends up using magic to get help from all the other Lokis. Every version we’ve met in the comics is there to help him talk to Thor.

It’s funny because while Thor and Loki fight, the rest of Lokis end up fighting among themselves as well. Apparently, Thor thinks that Loki is insane, but is he? Every single version of Loki is Loki, he likes it or not. This means that he can strive for good or evil again. Or walk the line as always. He wants to be a better version, but how can he do so with such baggage?

The worst demons a person has within are the ones of their own making. So, Loki has more to argue with himself than with Thor. Loki has some issues, but Thor has her personal issues too. She doesn’t listen at all, a thing that she shares with all the other versions of Thor. Hammer first, ask later.

And that’s a huge problem. Because of that behavior, Loki is stalling and allowing villains to do their deed. The thing is that Loki doesn’t seem to want that to happen. There’s something bigger coming than just a “tiny” war in Alfheim, and if Thor is to stop it, she’ll need more than just hammering things and people around.

As for Loki, we still have no clue if he’s with the villains or with Thor at all. I think he has his own agenda, and that for some reason his playing everyone or everything. He might know something, or he’s just fighting with his own demons.

One of the best parts here is Lady Loki fighting Thor while all the male versions of Loki are arguing among themselves. It arrives at a point where both Thor and Lady Loki question if they’re the only ones doing the job while all the men are just fooling around. Even Superheroes end up having issues like this one.

Once all the magic is gone, Thor sets herself to save the planet by stopping all the bombs that are falling. Loki knew he was going to be attacked in the midst of the battle with Thor. Now the question is: what does he want? Is he planning to die along with Thor? Why is he acting like that? And most importantly: will Thor manage to stop everything and save the day despite being obviously outnumbered?

This issue of The Mighty Thor [The Book Depository] [Waterstones] is funny and compelling. For me, the best is having a taste of what it means to display the dirt out in the open shamelessly. Loki just puts all his demons, fears, and regrets out to help him. Not every version of him is happy with what he’s doing. We might even say that they’re his conscience, and they’re urging him to change and stop fooling himself. The only one who is being manipulated here is him!

What do you think will happen next? Will Loki help? Or will he end up collapsed with all his versions talking to one another in his head?

What we’ve discovered so far: