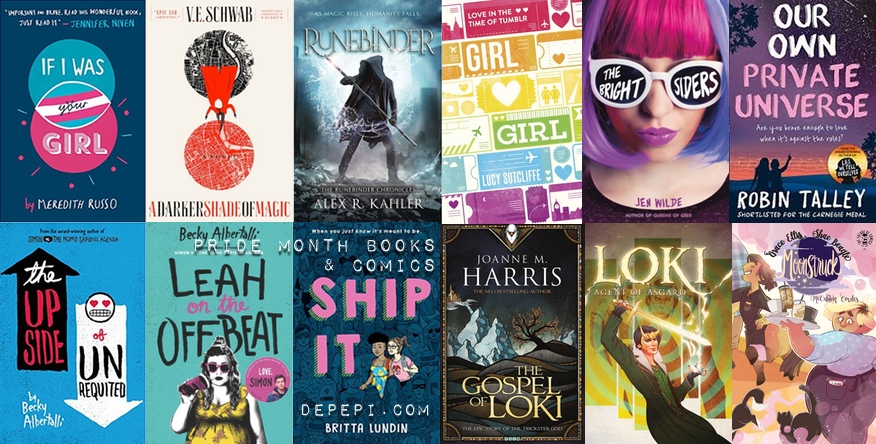 Let’s start with the God of Mischief. Loki Agent of Asgard [The Book Depository] [Waterstones] is one of the best Loki comics out there. He’s gender fluid, and clearly bisexual (although to be honest, he’s whatever he wants to be, but here he’s cooler because he transforms into a unicorn for Asgard.) The artwork is amazing, and the story compelling. You get to know Loki in all his glory and see how adorkable he can be. Loki wants to be good, to change. But his environment is making it difficult for him to do so. He has Thor’s support, and he also makes a friend. Yup, for real!

Misfit City [The Book Depository] [Waterstones] is full of mysteries and goodness. Wilder is obsessed with The Gloomies, a cult-movie from the 80s. But she’s unhappy in her town because nothing ever happens until she and her friends find a pirate map. This group of friends is about to have the experience of their lives in the most unexpected way! Say goodbye to all boredom!

Moonstruck [The Book Depository] [Waterstones] is sweet and cute. I was drawn to this comic series because of the colors and the artwork. In Moonstruck’s world, fantastic creatures and humans live together. Werewolf barista Julie and her new girlfriend go on a date to see some magic show. However, the magician bewitches their centaur friend Chet. He looks human now, and if the team doesn’t do anything, he’ll stay that way forever.

In The Brightsiders [The Book Depository] we meet the rock star drummer of the Brightsiders. Emmy is pestered by paparazzi who want her to create a scandal. After a night of fun, she ends up in the hospital, and that means in all tabloids. Despite the bad press, her band friends are supporting her, especially Alfie. There’s just a problem, they can’t stop kissing. Will their affair become love? Or will it become something to burn in the tabloids?

Our Own Private Universe [The Book Depository] [Waterstones] explores bisexuality through Aki Simon. She knows she’s bisexual, but she hasn’t had the opportunity to have a girlfriend. When her friend Lori goes on a trip to a small Mexican town, she joins. And then, she meets Christa. She seems more experienced, and love might happen. But things aren’t always that simple.

Ship It [The Book Depository] is about hard-core shippers and love. Claire is a fangirl obsessed with a show called Demon Heart. She also hangs out with Tess, a girl she finds attractive. When she goes to a Con for her favorite show, she ends up in tears because her hero is a jerk. The video of the Con goes viral, and the showrunners want to bolster their image within the LGBTQ+ community. This war makes Claire think about her priorities: will she open up to Tess, or will she keep dreaming in a fantasy world?

In If I Was Your Girl [The Book Depository] [Waterstones] we meet Amanda, an eighteen-year-old girl called Amanda. She was once named Andrew. Now, she’s in a new school, and she’s torn apart about telling her new friends about her past. This is a compelling book that will leave you breathless.

The Upside of Unrequited [The Book Depository] [Waterstones] is fun and heartwarming. Molly knows only unrequited love, that’s until her sister Cassie comes with a new girlfriend. The girlfriend brings a hipster-boy sidekick called Will. He’s fun, but Molly’s coworker Reid is buzzing around. So, what will happen next?

Leah on the Offbeat [The Book Depository] [Waterstones] follows the steps of cool drummer Leah Burke. She is the only child of a single mum who happens to be bisexual. She hasn’t told anyone, not even Simon, her best friend. When people she loves start fighting things come breaking down. What will she do next?

A Darker Shade of Magic [The Book Depository] [Waterstones] is a masterpiece series. London is famous worldwide, but, what if there were more than one London? There’s a Grey London, dirty and without magic, ruled by the mad King George III. Then, there’s a Red London, where magic is revered. There’s also a White London, ruled by whoever has murdered their way to the throne. But, once upon a time, there was Black London…

In Runebinder [The Book Depository] we follow the adventures of Tenn, a hunter who is fighting to keep alive. The Howls are roaming the streets and killing everyone, or turning everyone into Howls. Humans are loosing, and everything seems lost. However, Tenn meets Jarrett, another hunter, and falls in love. Can love make them turn the tables in such an unforgivable world?

The Gospel of Loki [The Book Depository] [Waterstones] is hilarious. It tells us what really happened with Odin and company. Loki explains Norse Mythology from his point of view, and it’s too funny to miss. He’s mischievous, treacherous, and naive. You can’t hate Loki after reading this book.

Girl Hearts Girl [The Book Depository] [Waterstones] is an inspiring coming out story. Lucy began an online friendship with Kaelyn in 2010. They fell for each other, and they met in 2011.

The Gentleman’s Guide to Vice and Virtue [The Book Depository] [Waterstones] is an hilarious book about a less-than-a-gentleman teen. A young bisexual British lord embarks on an unforgettable Grand Tour of Europe with his best friend/secret crush. Henry “Monty” Montague is anything but a gentleman. He’s in love with his best friend, and he plans to have the year of his life with him while traveling Europe. Only if things were that simple. This book is hilarious, smart, and sweet.

I want to finish my list with The Testament of Loki [The Book Depository] [Waterstones]. This is the second book after the Gospel of Loki. Many centuries ago, Asgard fell, and all the old gods were defeated. Some died, while others ended up in the netherworld, like Loki. He betrayed everyone. After a huge escape from prison, he realizes he wasn’t the only one to do so. Other, darker, things have escaped with him, who seek to destroy everything that he covets. If he is to reclaim what has been lost, Loki will need allies, a plan, and plenty of tricks…

Copyright: Images on this post (C) by their owners.

Making Fun - The Story of Funko, on Netflix