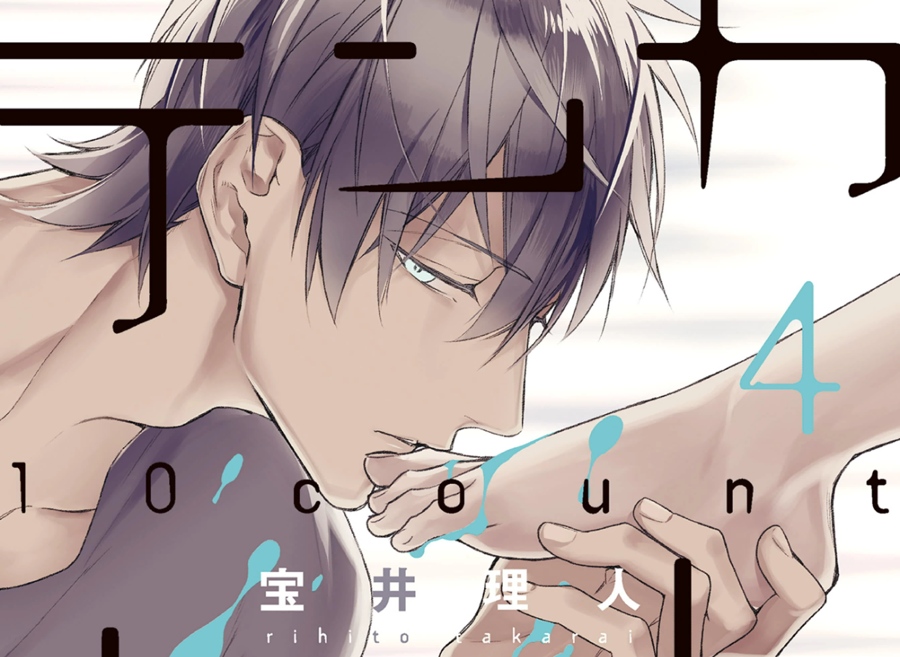 The fourth volume of Ten Count [The Book Depository] [Waterstones] is a yaoi manga masterpiece. Rihito Takarai finally tells us why Shirotani has misophobia. We also get to see his terrible thoughts and meet the person who played with his feelings as a child. It’s an intense volume where we can see how words can affect someone too profoundly. It also warns us to be careful about what we say and show to kids. (I know, this is a yaoi manga, but what happened to Shirotani as a kid is terrible.)

We left Shirotani and Kurose watching a movie at Kurose’s apartment. Kurose bought an adult toy to convince Shirotani of doing more. The toy seems less challenging since it can be disinfected easily. However, Shirotani isn’t feeling good, and soon Kurose’s plans backfire.

NOTICE: this post contains SPOILERS and MATURE content. Follow with discretion. The pictures that are juicier have an NSFW note. [Yaoi / Smut / Drama / MxM / Slice of Life/ Romance]

Kurose has been driving Shirotani to a destination: what he wants to do. Even if he says that Shirotani is in control, let’s face it. Kurose is pushing Shirotani in the sexual arena. And with the sex toy, he goes too far and triggers Shirotani’s trauma. Shirotani comes and says, “I’m sorry daddy.” After playing with the toy, and saying those words, Shirotani and Kurose talk. Shirotani wants to escape from the apartment, plus he doesn’t believe Kurose’s intentions are good. So, he ends up yelling to Kurose that he’s disgusting. Kurose is shocked and suddenly realizes that this time he’s pushed far too much. He can lose Shirotani then and there.

Shirotani exits the door in a rush. Overwhelmed, he ends up in a public toilet unable to process anything. He wants to get rid of his emotions. What he’s feeling is sexual arousal, and unable to stand it anymore, he decides to deal with it in the public toilet. First, he wonders how piggy everything is. The walls, the ground… everything seems filthy. And yet he cannot stop. When he puts his hand on the toilet lid, he realizes that it’s not the place that’s dirty, it’s him.

He’s the one who is filthy, not Kurose. He’s the one who is polluting everything. In his despair and realization, he ends up imagining Kurose there. And while he imagines he releases his sexual tension. And in doing so comes more pain: he’s filthy. How can anyone understand what’s going on with him? It’s impossible! Those are the thoughts that plague Shirotani. And it’s painful to read because he’s so very wrong.

Then we get to know why Shirotani thinks he’s so dirty and disgusting. And it’s as painful as unfair. We travel back in time to Shirotani’s childhood.

Shirotani only has his father. He’s a teacher, and he’s having an affair with one of his teen students. The problem here is the girl, she’s incredibly jealous of Shirotani. So much so, that her behavior is horrible. She hates the kid because she only wants to be with her teacher. Until this point, Shirotani’s relationship with his dad has been healthy and happy. He’s just a kid and doesn’t understand anything about sex or relationships.

To punish Shirotani, the girl thinks of a terrible plan. She convinces him to play hide and seek at the school, at Shirotani’s father’s office. She knows exactly where he’s going to hide. While they’re hiding, Shirotani’s father arrives, and the girl starts talking with him. She tells him that Shirotani has gone back home and that they’re finally alone. While Shirotani is hiding in a locker of the office, they make sex.

Shirotani doesn’t understand what’s going on. He can only stare at them from his hiding place through the small openings of the locker. He starts feeling a tingling sensation, and so he decides to masturbate. But, he doesn’t know he’s doing that. It’s just what a friend told him he should do if he felt that tingling sensation down there. So far, just shocking right? Well, the worse is yet to come. The girl lies to Shirotani’s father again and makes him check another area of the school so she can talk with Shirotani. When she opens the door, she understands what he did, and she tells him: “you’re disgusting.”

Mission accomplished! Just after this, Shirotani won’t be the same with his father. He starts washing his hands because he believes he’s disgusting. And since he also thinks that his father can read his thoughts by touching his head, he starts shying away from any touch.

First, Shirotani only had problems facing his dad. But as time progressed, he started to have those same problems with anyone. He would wash his hands continuously, and shy away from touching people. While at University, he discovered forums where people like him shared information. Instead of helping him trying to get better, he realized that he wasn’t alone. He wasn’t a weirdo, so it was okay to keep up with the way he was at that moment. And this is how Shirotani became the man he is.

Two months after the incident with Kurose, they meet again by chance. None of them has contacted the other. Kurose believes that Shirotani thinks he’s disgusting. Thus, he doesn’t want to do anything. However, when they meet again in an elevator, and it gets stuck, things happen.

Shirotani is first overwhelmed by the fact of meeting Kurose in the elevator. Then, he starts to panic. He finally asks Kurose to hold his hand, but instead of accommodating him as always, Kurose declines. He won’t because Shirotani thinks that he’s disgusting. Kurose is obviously pissed and uses the words carefully to send arrows to Shirotani. There’s a thunderstorm outside, and Shirotani is overwhelmed. “Do you find it disgusting?” Kurose is talking about the thunders, but the word disgusting hits Shirotani in the feels.

Then, Kurose asks Shirotani to kiss his hand. If he does it, Kurose will help him. But kissing his hand also means that Kurose will be the only one. He can do it on his free will. (It sounds very manipulating, to be honest, but at this point, Shirotani won’t change if someone doesn’t make him turn.) When he finally kisses his hand, he collapses. But Kurose takes him. And tells him he’s been a good guy. It’s then that Shirotani confesses.

Kurose isn’t filthy, it’s Shirotani. Crying, Shirotani asks Kurose to forgive him. Then, Kurose tells him that if Shirotani is dirty, then he must be too, and he’ll be for all his life. He loves Shirotani. At this point, I was with tissues. That’s a massive love confession. But at the same time, it’s a sad one because Shirotani is convinced that he’s filthy.

This is one of the best yaoi manga that I’ve read so far. Ten Count [The Book Depository] [Waterstones] is touching and addictive. Kurose still strikes me as a bit manipulative character. But, he’s a seme, and he’s trying to do good to Shirotani. Although his ways are a little bit shady, he’s suffering too. What do you think about Kurose? Does he strike you as somewhat manipulative?

When is LOKIsday? The Day of Loki isn't Friday. It's Saturday!

Making Fun - The Story of Funko, on Netflix