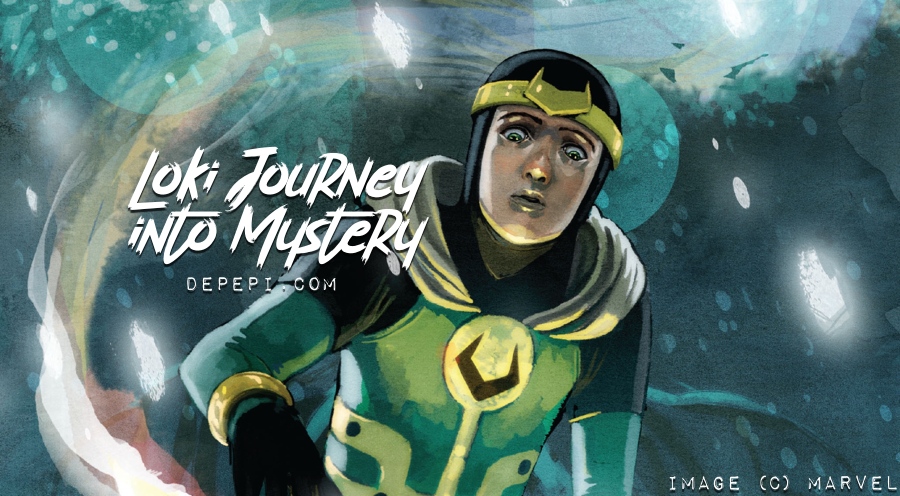 Loki misses Thor a lot in Journey into Mystery [The Book Depository] [Waterstones]. It’s Yule, and the All-Mother is planning to celebrate it so that humans aren’t afraid of the New Asgard. The first thing we see is Volstagg in the role of Santa for the kids. Volstagg wanted to throw a Norse party, with tons of food and mead, but he had to settle for being Santa for a day. Meanwhile, Loki has to deal with the harassment in this new Asgard. Now that everyone forgot about Thor, he’s alone and without any protection.

Hela brings presents for Loki. He goes to where Leah is and leaves the parcel there. When Loki arrives and opens it, some puppies come out of the box.

These are hell-hound puppies. Most of the mare nice, but there’s one, in particular, that’s murderous and chatty. So, he goes to the All-Mother and asks for advice. She tells Loki that if she cannot find any home for the pups, he’ll need to deal with them. So, Loki starts doing all types of tricks to find homes for all the doggies. He even convinces the X-Men to take one.

However, there’s the rebel one that is spooky. Nobody wants him. He’s all the time talking about murder, eating flesh, and bringing the end of days. Plus, he leaves a trail of fire around.

So, instead of killing the dog, he names it Thori. And yes, that’s after Thor. Even if Loki doesn’t admit that he remembers Thor, he misses his brother a lot. And the proof is saving this forsaken dog and naming him Thori. Now, the dog is trouble, but thanks to Loki we know that he ends up being quite nice. Not brilliant, nor hellish enough, just nice for being a hell-hound. [And yes, Thor ends up meeting Thori in the Unworthy Thor series.]

I think that Loki ends up keeping Thori because they’re much alike. Nobody likes Loki, and no one wants to deal with him. He’s alone, just as Thori is. Loki can be Thori’s only real friend, just like his brother was. I think that Loki might be feeling that if he can save a dog like Thori and make of it a good hell-hound, then he has an opportunity to change as well.

Journey into Mystery is getting better at least on the heart side of things. Loki is trying his best to be good. But Ikol is acting weirdly, always trying to make Loki fall into the dark side. Loki is in a very delicate position. Without his brother, he can surely become evil again easily. However, he also has the chance to be someone different. But it’s challenging when everybody expects you to fail. What will happen next in Journey into Mystery [The Book Depository] [Waterstones]?

Copyright: Images on this post (C) Marvel / Top image made by dePepi with a (C) Marvel official image.

When is LOKIsday? The Day of Loki isn't Friday. It's Saturday!