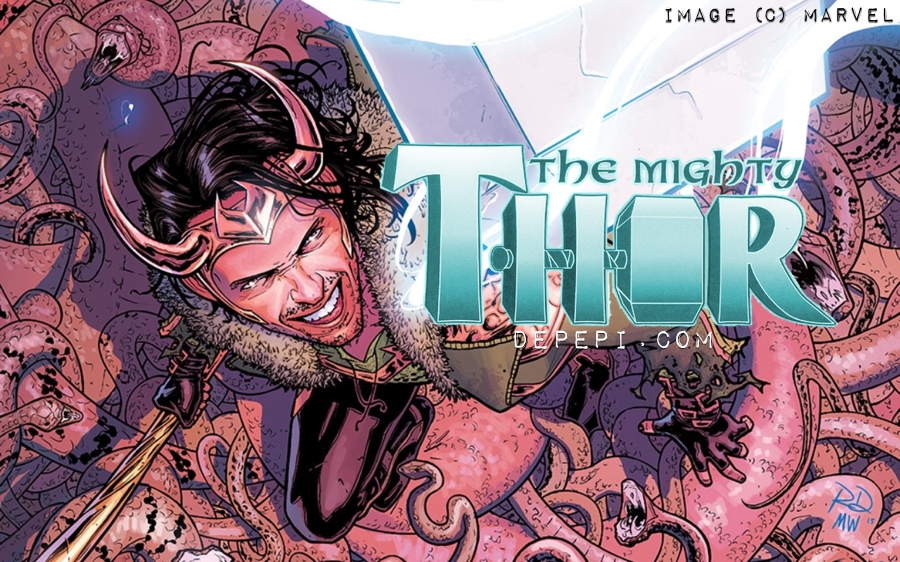 This THORsday we’re dealing with Loki again in The Mighty Thor [The Book Depository] [Waterstones]. He’s back, and he’s ready to make some mischief. But before he meets the new Thor, he has to prove to his DNA father that he’s evil. Laufey has his own sense of honor, and it means that you have to be evil in the Jotun way. However, Loki isn’t up to that, and he passes the test failing it. But, how so?

Laufey chose the strongest warriors he could to fight Loki to death. Instead of using a weapon, Loki used words, and they killed each other. To the Jotun’s surprise, Loki has killed everyone. However, to the Jotun’s chagrin, he didn’t do it directly nor using the brute force. Despite that, he accepts him into Malekith’s evil club.

While Loki is under a Jotun test, Jane is battling Asgard warriors. One of them is the Snake, Odin’s brother. You met him in Journey into Mystery. He was a great evil that wanted to destroy Asgard, and Thor killed him and then he died. As for all gods in the Marvel Universe, they came back. The Serpent is sly as ever, and he wants this new Thor dead. However, Heimdall isn’t taking it and ends up helping Thor to travel to where the real war and problem is: where Malekith is killing all the elves.

Jane finds a mess. While she tries to save the day, the Enchantress asks Malekith a favor. She want’s the other Thor’s head. But, she’ll settle for this Thor’s one for the time being. Instead of using the Enchantress, both Malekith and Laufey agree to send Loki. Since they both know they cannot trust him fully, they plan to kill both. Malekith’s evil plan is to take everything and kill everyone in the middle.

And so, after we see the true colors of Laufey, Malekith, and the Enchantress, we aren’t so sure about Loki. When he meets this new Thor, what is he going to do? Is he going to use words to make her mad? Or is Thor going to smash him on the ground? I can’t wait for reviewing the next issue!

Loki resembles Tom Hiddleston a lot in this comic book. In many panels, you can see the actor instead of the comic book version of Loki that I love from Loki Agent of Asgard. I love Loki in that series, but this other Loki is also cool. I think that we can find more familiar faces on the comics from the MCU because Marvel is trying to lure MCU fans to read the comics. I’m not sure that’s working, but as a fan of both, I’m delighted. (Still, my favorite is Lee Garbett’s version of the Trickster.

Do you love The Mighty Thor [The Book Depository] [Waterstones]? Don’t miss anything then.

The Vocabulary of Fandom: T

Thor's Potential and Loki's Future in the MCU