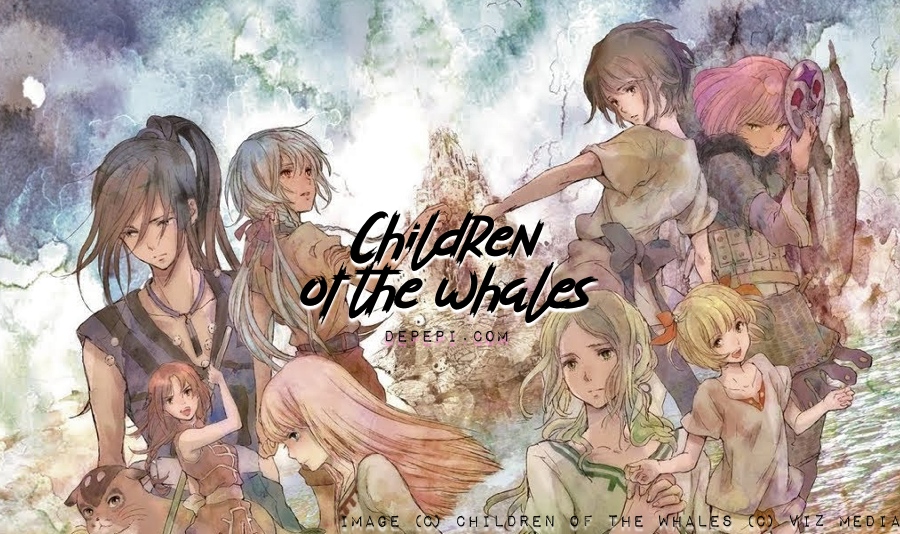 Netflix has made it again with Children of the Whales [The Book Depository] [Waterstones] (Kujira no Kora wa Sajō ni Utau). This beautiful anime is based on a fantastic manga. Despite its colorful drawings and beautiful artwork, this is not for children. The story is set in a post-apocalyptic world, and soon after some episodes, we’re faced with violence and the effects of war. The story is narrated by Chakuro, a kid who works recording the events that happen on the island.

Most people on the island are young. There’re two types of people in the island, those who are marked and those who aren’t. The marked ones can do magic, but their lifespans are short. Those who have no magic live long lives. People with long lifespans rule the island. Chakuro, despite having magic, is sloppy with it. Instead of using it for the different tasks around the island, he’s chosen to be a writer. He wants to write about the lives and deeds that happen to it, so everybody remembers their story.

SPOILERS: this review has massive spoilers from the anime. It’s very violent, and harsh at times. As I said, this is not for children. If you want to give it a go before reading this review, please go to Netflix. The artwork is beautiful, but the story is hard to swallow.

People in the island call thymia the magic they use. Some very skilled people can handle thymia, but Chakuro isn’t one of them. While he’s happy living on the island, others, like Ouni, dream about the outside world. There must be something else but just sand, right? Well, one day they find another roaming island, and when they go to explore, Chakuro finds Lykos.

Lykos seems aloof. In fact, she first tried to kill Chakuro. Instead, he takes her with him to the island. She has no emotions until she spends some time with Chakuro and friends. Her arrival is seen with suspicion by the elders, but we’re left as clueless as Chakuro. Ouni, Chakuro, and Lykos return to the roaming island, and she shows them the creature that eats emotions. When they return to the whale (their island) things go astray. First, Ouni is imprisoned again (for being a brat). Then, a mysterious army attacks them.

Hundreds of soldiers land on the island and start killing everybody. They don’t care if they’re kids or not. In the assault, Chakuro is almost killed. He’s with Sami, Suoh’s sister. Suoh is a great friend of Chakuro and the one who trains him in the art of writing. She’s killed along with many others. When the army disappears, Lykos tells them that they’ll come again, this time to kill the rest.

The people of the island aren’t used to killing, least fighting. They’ve been using magic to do tasks like keeping buildings from falling or creating new things. However, this attack forces them to prepare for battle. The problem is that the ones who can handle magic are most of them, children. Because one of the leaders of the young ones was also killed, they ask Suoh to be the new leader under the orders of the elders. Suoh has no choice but to ask children to fight.

What’s even worse, they discover that the enemy also uses kids for war. Under the masks of the enemy, there are kids like Lykos. They show no emotions. They have no fear of death either. The only crazy one is a kid called Liontari. He has pink hair and is obsessed with killing. Unlike the others, he’s pure emotion. It seems that the creatures that inhabit the enemy’s ship are unable to eat his feelings. He’s totally insane.

Finally, the day of fighting arrives, and their only chance is to kill the creature that powers the ship. As it turns out, their island also has one. But unlike the others, this creature eats the lifespan of those who use magic. At first, people are angry, but soon they come to terms with it.

The battle for survival is horrible. They do win, but a high price. The enemy does kill many other kids and adults. The island isn’t innocent anymore since kids have been killing many enemies who were also kids. By now we discover that their existence is a thread for the Empire, the enemy. Many years ago, they were sentenced to exile because they were criminals. But those people aren’t alive anymore. The descendants of those who dared go against the Empire and maintain their emotions are the ones who were living in peace.

Another nation arrives at the island. They seem friendly and are shocked to find out a place where most of the people are just kids. Soon they make an alliance, and they decide to let people go where they want. They can keep living on the island, or start living in the new nation.

The artwork is beautiful, and the effects when characters use magic are brilliant. However, there’s some confusion because most of the characters look alike. If you take a closer look, there’re around five different types of faces. Because of the different hair colors and fashion, we can spot the characters quickly. However, I wonder how confusing the manga might be.

The other downfall is the number of characters and episodes of the first season. Few episodes and too many characters are what doesn’t give you time to feel for them. In just an episode you have so many deaths that you get numb. However, I guess that the primary target here is to follow the story of the island and the words that Chakuro say. He’s the narrator, and so we know that he has to survive. Although we get a glimpse of many other characters, we have no time to feel for them entirely.

Despite the downfall, I recommend Children of the Whales [The Book Depository] [Waterstones] for an adult audience. It’ll make you question many things, from policies to how we stereotype other people. It’s a rough go, so prepare some tissues just in case.

Marvel is Plagued with Daddy Issues

The Vocabulary of Fandom: T