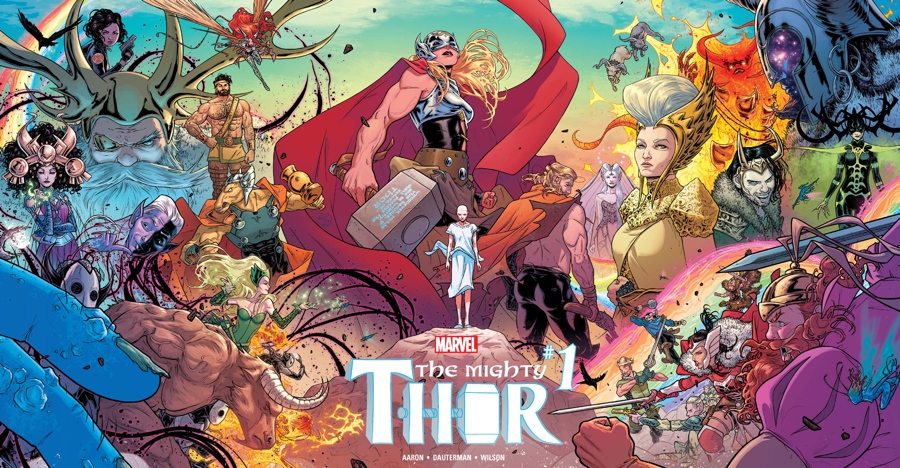 This THORsday we’re going to begin reading The Mighty Thor [The Book Depository] [Waterstones]. In this comic book series, Jane Foster becomes the new Thor. Our favorite Thunderer becomes unworthy, and while he seeks for redemption, she takes his place. However, Odin doesn’t like the idea and goes crazy. Thor (Jane Foster) is a villain in Asgard. While Jane can go as she pleases when she’s Thor she cannot. Odin put Freyja in prison, something unthinkable. And while Odin has gone mad, his enemies assemble to take all the realms.

Jane is the new Thor. However, this costs at a high cost. She’s sick with cancer, and every time that she takes Mjolnir, she gets sicker. Whatever treatments she gets in the hospital are undone when she uses the hammer. And since Earth’s future is at stake again, she needs to use Mjolnir.

So, while she’s getting her treatment and Volstagg waits for her to finish, she watches the news on the TV set in the treatment room. It all seems okay until the space station they were talking about is in trouble. Lots of elven corpses appear from nowhere. And with them, the spoils of war. Someone is killing Alfheim people and scattering them on Earth’s sky. Jane stops taking her treatment, calls Mjolnir and goes to save the day.

When they return with Volstagg to Asgard, they find the assembly quarreling among themselves. Alfheim is falling, and yet no one will do anything. Without the presence of Odin, everything seems lost.

The dark elves are plotting against Asgard, that’s very much clear. But, we don’t know exactly why they want Alfheim gone. After talking with Freyja, Jane decides to go to Alfheim and help. In the meanwhile, we get to see who Malekith has invited to the party. Loki is back, and he’s trickier than ever! (This is the Agent of Asgard version of Loki.)

When the other evil parties see Loki, they freeze. Can we trust this guy? Well, they cannot trust him. Because even if he says that he wants to kill Thor (Jane), maybe he doesn’t really want to. Remember that the Thunderer has gone missing and no one knows where he is. Most likely, he’s retrieving the other Mjolnir (read here).

What’s staggering of this version of Thor is that she’s incredibly ill. If she keeps using Mjolnir, she’ll die because her cancer is going to be untreatable. But if she doesn’t use the hammer, Asgard will be lost. Jane is very weak and going weaker as we keep reading the comic. However, she’s all-powerful when she takes the hammer in her hands.

We have the representation of many types of people in comics, but having someone who is dying isn’t popular. She’s weak, but she’s strong. Her will and heart are the strongest assets she has.

The Mighty Thor [The Book Depository] [Waterstones] (Jane) is a very special Superhero. In her weakness, she’s the strongest she can ever be. Plus, Mjolnir deems her worthy, unlike the Thunderer, who is currently lost thinking about his sins. She’s also a human who had no powers whatsoever until she got ill and the Hammer called to her.

I think this is a fascinating read for any Thor fan out there. It isn’t the regular read, for sure, but its message it’s incredibly powerful. Never think of weak people of just sicklings, since they have surprises in store for you.

The Vocabulary of Fandom: R