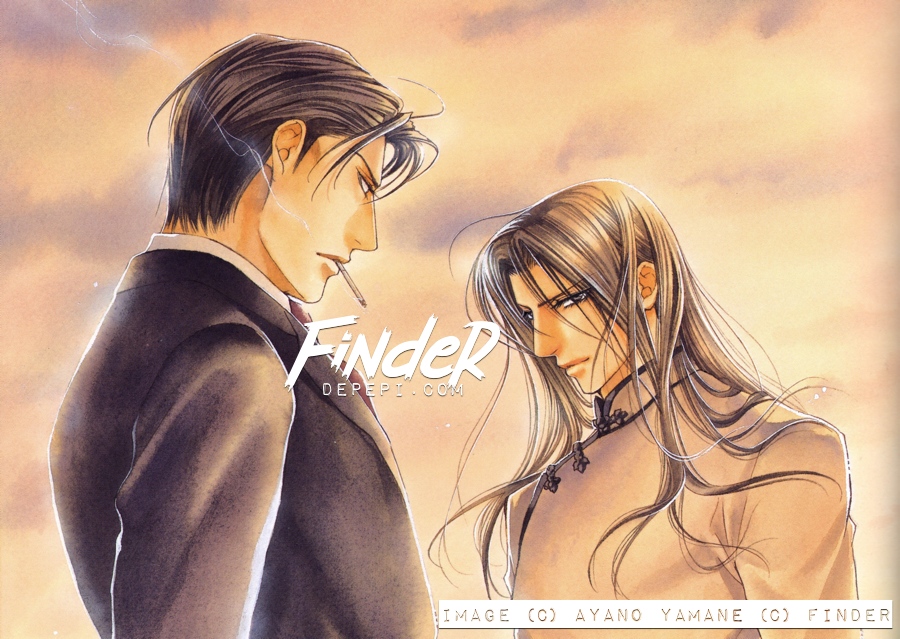 The third volume of Finder [The Book Depository] [Waterstones] leaves you breathless. Ayano Yamane’s yaoi manga masterpiece levels up the intrigue and suspense in this volume. Asami and Fei Long are enemies. The Hong Kong kingpin wants the data disk that Akihito erased (and returned) to Asami. But, is that what really Fei Long is after? After some months of the disk incident, he’s back to haunt Akihito. First, his men raid Akihito’s apartment searching for the disk. And when he cannot find it, he decides to take hostages. While Akihito’s friends think they’re waiting for him to work with a handsome Chinese model, Fei Long has posted an ultimatum. Either Akihito provides the data, or he’ll kill his friends.

It’s evident that Fei Long is using Akihito to get to Asami. However, soon things will get worse for poor Ahikito who is trapped in a perilous game. Asami thinks Akihito is his property. And Fei Long believes that Asami cares for Ahikito. Hence, the photographer is Asami’s weakness.

Akihito has no choice but to contact Asami if he wants to save his friends. Asami happens to be in a hotel when they meet. And apparently, the yakuza boss isn’t going to yield because he can see how Fei Long is playing with Akihito. The photographer is so desperate that he begs for help, only to be lectured by Asami. The data he seeks is all the contacts of many people that work for him. If he gives Fei Long the information, he’ll probably kill everybody on that list. So, Asami asks if Akihito can make the call. Apparently, he cannot. Because he won’t stop in trying saving his friends, Asami ends up what he does best. He kisses Akihito and prepares for a sex session to make him forget all about it.

Although Akihito complains a bit, he lets Asami do whatever he likes. In fact, he’s so much into it that he also gets fun. It seems that they’re at it forever when Akihito receives a call from his friends. After a while, Fei Long snatches the phone and tells Akihito that if he wants to see his friends again, he needs to bring him the data. Asami and Akihito keep doing it for a while longer, then Asami gets to the shower. In the meanwhile, he gets notice of what he’ll go next, to another hotel.

When Akihito tries to use the bath, his legs are so weak that he falls on the floor. Asami helps hip up, but Akihito wants to do his things alone. When he’s in the shower, he wonders what’s he really looking for? He tried to get soothed by Asami and to forget, so he got that from him. He wonders what’s happening to his heart.

When Akihito returns to the room, Asami gives him Fanta, and not a Coke. Akihito is pissed at this point, so whatever Asami gives him it’ll be the wrong one. So, after telling Asami where Fei Long has his friends, he falls on the bed. Asami put some drug in his Fanta can, so he’ll sleep the whole thing and not disturb Asami. Well, at least that’s what Asami thinks. As soon as he goes out with the car, he has a tail. Fei Long’s men are following him to his next destination. He avoids them, and he’s able to talk to his Hong Kong connection. Soon he discovers that what Fei Long was after isn’t the data but this man.

While that happens, Akihito wakes up only to be taken by Fei Long’s men. With no choice, he gives Asami’s location. That’s how Fei Long finds him and kills the man from Hong Kong. While Asami cleans up, Akihito is able to tie Fei Long’s guy. Soon an associate of Asami arrives to take him where Asami is. Then it’s when Akihito confesses that it was him who gave them away.

Until this moment, Asami was open to leaving Akihito some autonomy. Now, he’ll bring Akihito to hell with him. Asami doesn’t care about anything else, and he’ll have all of Akihito. Fei Long did release Akihito’s friends when he gave him the whereabouts of Asami. But when Akihito meets his friends again, fate and curiosity make him put himself in danger again. He sees Fei Long’s car going somewhere, and despite thinking of letting it go, he follows the car. He discovers what Fei Long is up to, but in doing so, he also gets caught. Not after sending a message to Asami.

Fei Long is jealous and ends up raping Akihito again. It’s painful and dramatic. Then, he decides that he wants to send Akihito’s corpse to Asami as a present. Fortunately, Asami appears and tries to save Akihito from all this mess. But things go astray soon, Fei Long won’t let him go and shots Asami on the leg and on the chest. Asami also shots Fei Long, in the gut.

Unable to escape, Akihito ends up in Fei Long’s hands again. What’s worse, the Hong Kong kingpin is bringing him to his home, as spoils from war. Asami tries to rescue Akihito, but his wounds make him slow and sloppy. (And so, we need to wait until the next volume to know what happens next).

This volume [The Book Depository] [Waterstones] has far more action and suspense. We also get to know more about Akihito’s psychology. He’s impulsive, reckless and in transition. With that, I mean that he’s moving his feelings towards liking Asami. Although he doesn’t clearly know it yet, he fancies the yakuza boss. Remember that he’s been forced to have sex with Asami at the beginning, then he was raped by Fei Long, and then Asami forced him again. However, Akihito now seems to be okay with Asami’s doing. His psychology is changing, and so are his feelings. There are some tropes for this: rape as drama and lovers from Stockholm.

Asami is also changing. What he started with Akihito as owning a prize, it’s turning to falling in love. He could have punished Akihito for telling Fei Long his whereabouts. Instead, he wants Akihito closer to him. I know, it’s sick and complicated, but Asami is a yakuza boss. So, there’s nothing simple and easy with him. And because he doesn’t express his feelings, he’s hard to read. Asami will survive his wounds, and he’s going to be extremely angry. Whatever Fei Long ends up doing to Akihito will be the next level in this drama, and I’m sure it’ll be either bloody or sexual or both.

In the next volume, we’ll be flying to Hong Kong. Let’s see how Akihito’s psychology changes. Will Fei Long win his heart? Finder is an excellent yaoi manga. I do have tons of tropes, but it also has an exciting story and enough mafia bosses quarreling around to make it juicy.