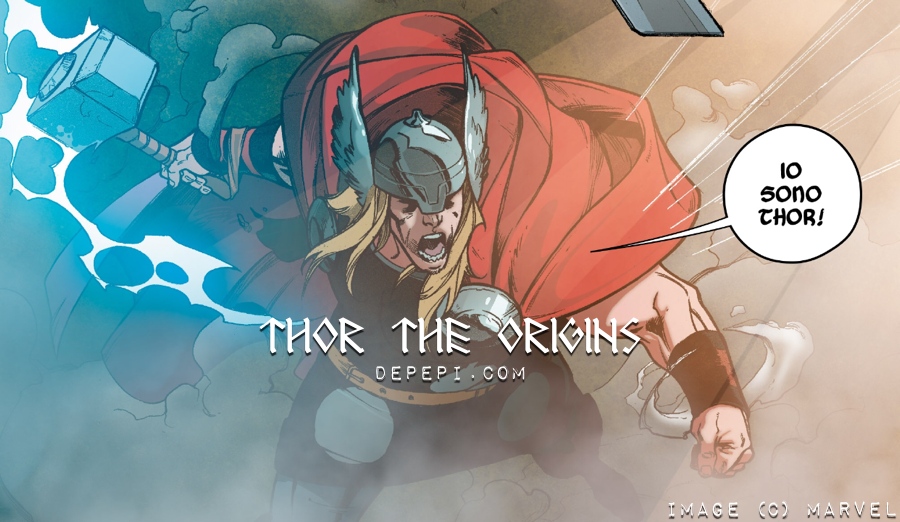 It’s THORsday again! To honor one of our favorite Gods, we’ll finish reading Thor: Worthy Origins [The Book Depository] [Waterstones]. We left Thor on Midgard with an identity crisis. Don, his human alter ego, is still thinking about who is real. Is it Thor the real one, or is it Don? Jane isn’t helping him much, since she’s being quite critical.

While Thor is on Midgard, Loki is plotting evil plans in Asgard. No one suspects him, but he has a plan to take Asgard by force and to teach a lesson to Odin. He feels he’s the second dish, and he doesn’t like it at all. While Thor was in Asgard, everyone had only eyes for him. Now that he’s gone, Loki will do. And that doesn’t please the Trickster a bit.

While the warriors and Loki are having fun in a tabern, Odin appears with bad news. There’s something going on, and soon they’ll know exactly what. He asks Loki to take care of their defenses. Lady Sif follow Loki and confronts him asking what he’s hiding. She argues that he has changed a lot. When they were kids, his heart was open. Now she knows that his heart has light and shadows, and that he already knew something was wrong. Before she can do anything, Loki uses a trick and traps her with magic.

The same day, while Don is walking around, he finds the Norns in disguise. They read the Tarot on the street. They tell Don his choices and his fate, saying that he really know who he is. As soon as he sees the Bifrost appearing in the sky, he knows who he is, Thor, the God of Thunder. He transforms and prepares to protect Midgard from the evil that appeared in the streets. Three warriors also appear, including Volgstag. They help Thor to dispatch the creature. Jane wants Thor to remain on Midgard, but knowing that Asgard is in danger and the Jotuns are trying to take it by force, he tells her that he needs to go. And so, Jane jumps on him when he uses the Bifrost to go back home.

They have to battle the way in the city and in Odin’s precense. While they battle, Loki goes rogue on Odin. He tricks his father, and then he tricks his adoptive father, Farbauti. But not after Odin ends up on his knees and heavily wounded. While Loki thinks that nothing can happen to Odin because he’s eternal, the reality is entirely different. The blade that was used for the wound can kill Odin. Loki desperate apologizes but keeps up with his plan. He’ll seize Asgard.

Thor ends up wining, and it’s good that Jane came with him because she convinces Thor to call back Don and operate on his father. What Thor does first is to forge medical tools from the blade. In doing so, he has the tools to save his father. He transforms back into a human, and with the aid of Jane, they safe Odin. I think this is a strong message. While we’ve seen that Thor has been having issues with his human alter ego, we can see here that a mere human has the tools to help a God like Odin.

Thor was arrogant and selfish. Having two personalities, one almighty and the other humble, has let him understand that being weak doesn’t mean that you can’t do anything. Moreover, being humble is a gift, not a weakness. But while Thor learned and became better, Loki let the darkness in his heart. Loki has doubts and daddy issues. He also has problems with Thor, since no one looks at him in the first place. No one praised him, because Asgardians praise force above anything else. Loki is all aobut tricks, and tricks mean that you have to use the mind more than the muscle.

Although Thor learned that the mind and not the muscle can help, having Loki tied to a Snake as a punishment isn’t the way to go. Obviously, Odin has no clue on how to be a good father. In fact, he’s making things worse for Loki and making sure that his son will be a villain. What strikes me is that no one has given this a second thought. Thor becomes the focus number one and the one with all the benefits.

This comic book was fascinating, and it does make you think. What do you praise more? Fighting your way out? Or thinking your way out? Do you use a combination of both? Do you accept help from others? If so, do you trust them? When you think about these questions and put yourself in the skin of Thor or Loki in this comic book, you’ll realize how and why Thor ends up becoming a humble hero, and Loki, a villain with many self-esteem issues.

The Vocabulary of Fandom: P