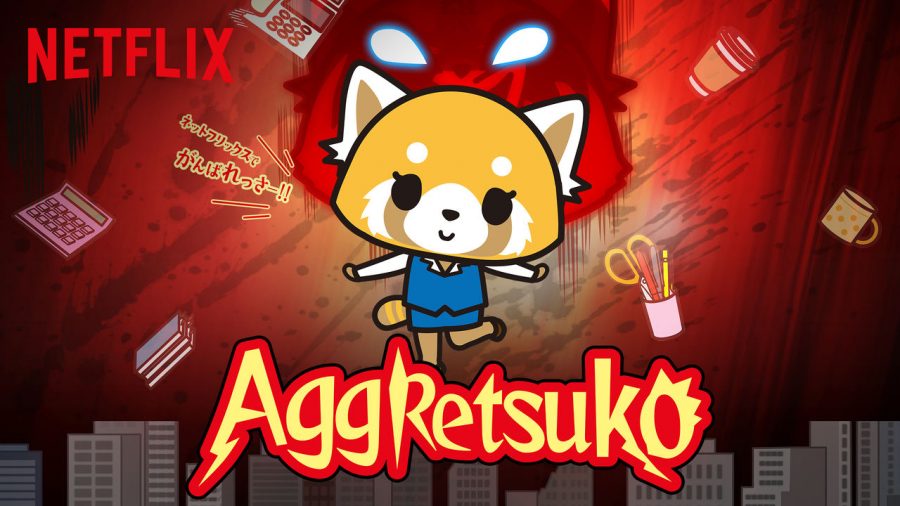 I found another jewel on Netflix: Aggressive Retsuko, also known as Aggretsuko. Meet office lady Retsuko and his quest to live better. She gets rid of all the bad vibes from work in the karaoke. You have no idea how much I connect with her. When I was living in Japan, I used to go to the karaoke and sing hard rock and heavy metal to get rid of all the stress from Uni and work. Now that I live in the UK, it’s hard to do the same. In Japan, you can go to the karaoke alone, rent a single room for very little.

But let’s talk about this red panda first. Retsuko finished University with high hopes, and she became an office lady, OL for short. And after some years working, she hates it to the bone. There are injustice and tons of sexism at work. How she deals with the stress is priceless: she sings metal in the karaoke. And when she cannot manage it anymore, she does it in the loo!

Aggretsuko has to deal with Ton, the pig boss that she has. I think it’s no coincidence that the boss is depicted as a pig. I won’t say where I was working, but one of my bosses in Japan also played golf! And yes, he did it while the rest of mortals worked, there in the middle of everyone. It seems that bosses like golf. And for some reason, they practice it at work.

You might think, “heck, why does the pig practice golf in the middle of the place?” Working spaces in Japan are different from here. Bosses do share the area with subordinates in many cases. That’s why Ton (and one of my former bosses) play golf while others are working.

Aggretsuko does have friends at work, but also enemies. All characters are stereotypes of people at the working place. The choosing of animals is on point here. Even the cat friend of Retsuko is a stereotype of “freeter,” Japanese who live doing different easy jobs and that shy away from companies like the one Retsuko works for.

It’s also interesting to note that characters are animals. Most Japanese are shy in social media and use animal pics for their profile pictures. Many have favorite animals, and many think they’re like them. So, that this anime does have animals is no coincidence.

It’s also no coincidence to see the cute Red Panda become a demon while singing Death Metal. In a society where women have to be always super sweet or super stylish, it’s just natural to see Retsuko’s transformation. Women spend more time making themselves ready for work than men every morning. Makeup can take up to 30 minutes. Then there’s the horror of wasting most of your salary in clothing because you can’t repeat it much or people are going to laugh at you or think you don’t care. That Retsuko ends up with the wrong shoes in the first episode is just one of the many critics of society’s double standards on women.

Many times it’s other women who make things worse, it’s not only men. We can see that easily in this show. So, while we might laugh along Retsuko’s working life, I can undoubtedly nod to most of her problems. Sometimes, even if you need the job, you snap and end up saying the wrong thing to your boss. You stop being nice or taking all the abuse on you. Because let’s be clear, most of the stuff for Retsuko is abuse, and I’m sure many can relate without needing a pig boss.

Aggretsuko is a punch on the gut. This show is seriously dope, and I adore it. I’m sure many nuances of the Japanese culture are lost in context, but for me watching it is therapeutic. I miss karaoke and going there to end up with a voice like Darth Vader’s. It’s incredibly relaxing to go there and let all the dirt out. Now that it’s impossible to have such wonderful Karaokes in the UK, I dance like possessed. Whatever the problem, just put it out of your system!

All those people who have pictured me as a cute unicorn, know that I do sing like Aggretsuko when I’m at my limit. And if someday we end up in a karaoke together, know that I’ll sing songs from hell.

Don’t miss this show. It’s not autistic friendly due to the intense colors. It’ll probably make you have some sensory overload. However, if you can manage it, watch it now. It’s gold!

A Court of Frost and Starlight, ACOFAS is Here!