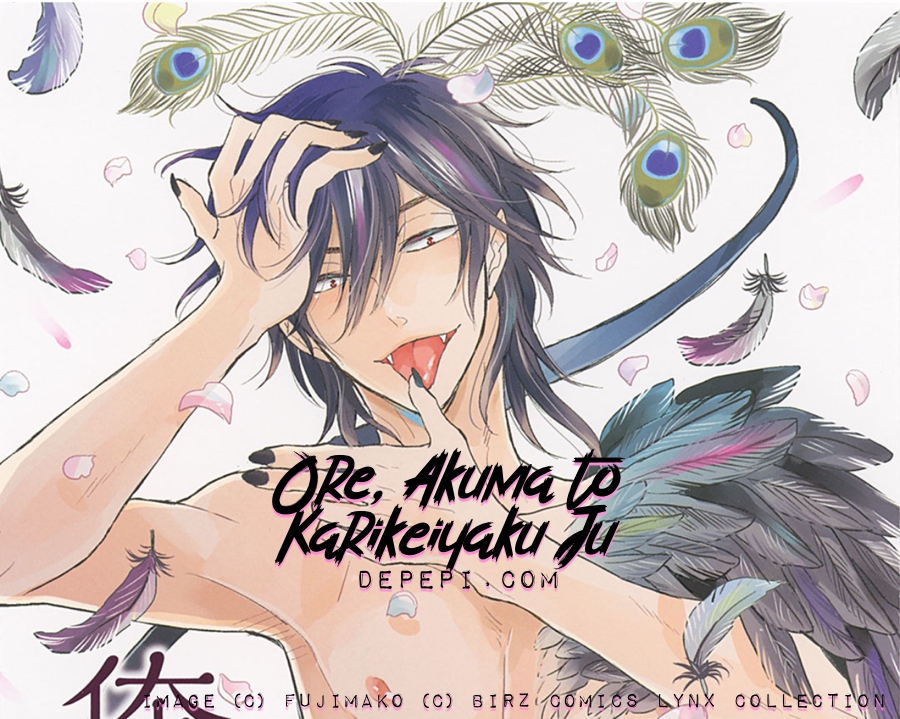 Our weekly yaoi manga comes a little bit late due to some busy times. Ore Akuma To Karikeiyaku Chu, or I am temporarily under contract with the devil [The Book Depository] [Waterstones], is as sweet as sexy. Kyohei and his older sister Sayaka own the family flower shop. When they were teens, their parents died in an accident. Sayaka married, and now Kyohei is in charge of the shop. However, things are going astray. Sayaka’s old friend Hatou has opened a shop in the street in front of them. Sayaka thinks it’s to close the shop because she turned him down years ago. Hatou wants their shop closed, and that’s a fact.

Desperate, Sayaka comes up with a plan: let’s call the devil and make a plan. Kyohei doesn’t believe in such things, but since his sister is desperate, he goes with the flow. Until the devil appears for real. Although the one performing and calling the devil is Sayaka, she tells the devil that it was her little brother. At this point, things go crazy.

NOTICE: this post contains SPOILERS and MATURE content. Follow with discretion. The pictures that are juicier have an NSFW note. [Yaoi / Smut / Comedy / MxM / Fantasy / Paranormal]

The devil that appears in front of them is Kaimu, and it seems that this is his first assignment. He doesn’t seem to care much about Sayaka, since his eyes are all on Kyohei. He asks them what they want, so they can make a contract. The brothers want their shop to be successful. And so, Kyohei ends up with a temporary contract with Kaimu, who happily binds by using a magic spell on Kyohei’s neck.

Then, when they go to check Hatou’s shop, the guy appears and confrots Kaimu. Both of them end up having an argument and Kaimu decides to make of Kyohei’s shop the best ever.

Kaimu notices that there’re many people at night, and so he offers to Kyohei to change the opening hours of the shop. It’s a great idea, and Kyohei ends up agreeing to it. Hatou is getting all the morning clients, but by opening the shop later on, Kyohei can get all the night clients. People who end up work late can have an opportunity to buy flowers for their loved ones.

Kaimu is pleased with his idea, and he demands food. Kyohei, who cannot say no to him staying home, ends up cooking a generous dinner for them. There’s only a problem: Kaimu doesn’t eat normal food.

For starters, Kaimu helps an old man who buys flowers in their shop. The client has a rocky relationship with his loved one, and thanks to Kaimu they end up together. They move to the countryside with her children, and they send to them happy pictures. At this point, Kyohei is changing his mind about the demon. Although he might be feeding on him in such a weird fashion, Kaimu seems to care about people, even if he doesn’t realize about it.

As Kaimu upgrades the feeding times to only felatios to something else, Kaimu’s older brother appears to make things difficult for the duo.

Kaimu’s brother is an angel called Arael, and he wants Kaimu back. To achieve it, he decides to help Hatou. He might look godly, but Arael is devious and does use people to get what he wants. In this case, he’s using Hatou to make Kyohei break the contract and have Kaimu back. There’s only one problem, Kaimu seems perfectly happy working at the shop and having Kyohei under his grip. (Although it seems that it’s Kyohei who has things under control and not the demon.)

Because Kyohei lost his parents in an accident, he starts thinking that maybe Kaimu will be better off going back home with his older brother. So, at a certain point, he breaks the contract. And it’s sad, because Kaimu doesn’t expect it and takes it as his failure to achieve the goal of making Kyohei’s shop the best flower shop in town. Arael takes Kaimu and disappears with him, only to come back after some weeks. Kaimu is miserable at home, so much so, that he doesn’t want to do anything. Arael tells Kyohei that he can have Kaimu back, but if he hurst him he’s goin to kill him. So much for the angel…

And so, this time it’s Kyohei who calls Kaimu. This time Kyohei takes initiative and kisses Kaimu, and tells him, I’ll feed you forever. After the love declaration, Kaimu is still surprised. Kyohei asks him to make something impossible, and make another contract with him. Kaimu wants more this time: he wants all of Kyohei, including his soul. Kyohei agrees.

But there’s still someone sad in the story: Hatou. The guy was used by Arael to get to his brother. While this happened, he fell in love with the angel. So, instea of cowering, Hatou alls Arael and confronts him. After some surprise, Arael accepts Hatou. But, he does really seem more devious than Kaimu.

Ore Akuma To Karikeiyaku Ju, or I am temporarily under contract with the devil [The Book Depository] [Waterstones], is sweet and funny. The artwork is interesting and Kaimu is so naive it hurts. He doesn’t understand human emotions, but in trying to understand, he does good. Plus, he falls in love with Kyohei. They have a weird way to say I love you to each other. It’s all about meals in the demon realm. Or so it seems.

The Vocabulary of Fandom: O

Aggressive Retsuko, aka Aggretsuko is SO Dope