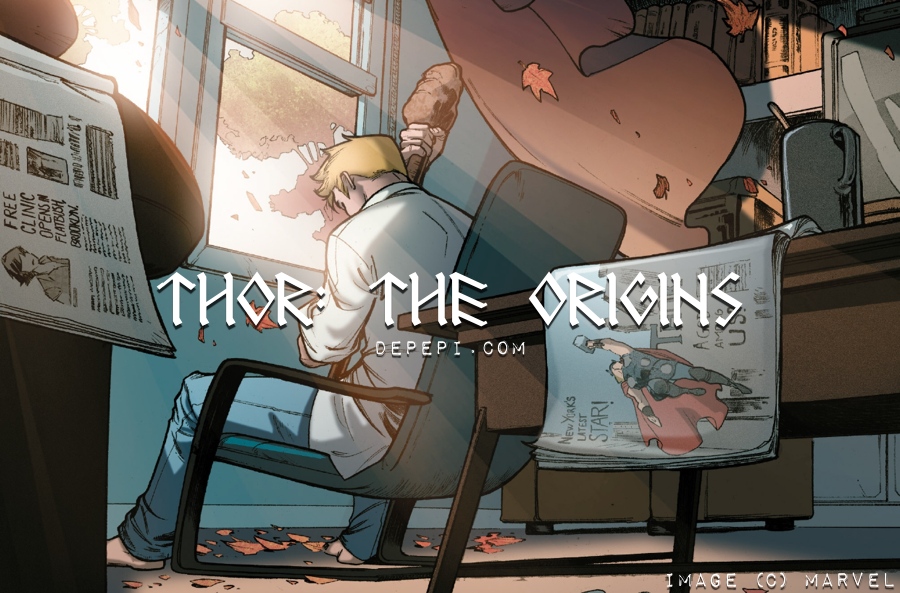 This THORsday we discover that Thor has double personality in Thor: Worthy Origins [The Book Depository] [Waterstones]. Odin banished his son to Midgard wiping out all his memories. Now he’s Don, a doctor in love with Jane Foster. But after visiting ancient ruins, he’s been someone else too. His human self goes around with a stick and somewhat limping. However, thanks to the stick he can transform into Thor. The stick is Mjolnir in disguise!

While Don is sweet and understand all things human, Thor is quite confused. Every time Don becomes Thor, the God remembers a little bit more about Loki’s trickery and how Asgard is in deep danger.

But, who is the real person and who is the dream? Both Don and the Thunderer have very different personalities. The only thing that share in common is the will to save lives. His girlfriend Jane is overwhelmed, and asks him to stop playing hero. The Thunderer is too much for her. However, Don isn’t going to stop at all.

Despite Don’s easy life as a doctor, he’s more and more convinced that Thor and him are the same person. However, the more he uses his Thor persona to do good, the more convince he is that he might be the dream and not the other way around. And this is frightening for Jane. It might sound crazy, but Thor is the real deal.

The problem is that when Thor appears, his humor and ways also appear. He’s still arrogant, and treats humans from his godly perspective. This is something that Don doesn’t do. He’s sweet and caring. But he craves becoming Thor and doing something else, something bigger to save his peers. While Done is sweet, Thor is too arrogant to understand the big picture. He needs to understand humans from Don’s perspective.

Thor and Don are the same person, only different aspects of it. As soon as they understand this, Thor will be able to go back to Asgard and save his home. It’s funny because this situation makes me remember many couples where the guy wants to do something, but his girlfriend pesters him not to do so. But he does it anyway. Let’s see how it’ll play out in Thor’s case. Will he keep the girl, or will they break up because of Thor’s arrogance?

And while Jane is overwhelmed, the whole world adores Thor. Nobody knows who this new Superhero might be, however they’re already posting everything online about him. Let’s be clear, even if Thor confesses to be a God, at this point in the story no one on Midgard is going to take him seriously.

I wonder how much of Don will remain in Thor when things clear up. So far, the Thunderer is being too arrogant and too stuborn as to see the big picture. The one who is understanding everything is Don. Thor’s human side is winning the battle in understanding the situation. And that speaks volumes about human nature. In our weakest, we might be showing our best traits. And sometimes, in our strongest, we’re too stubborn to see what’s happening. I wonder what will happen next on Thor: Worthy Origins [The Book Depository] [Waterstones].

I Got Published on HackSpace Magazine May 2018 Issue!