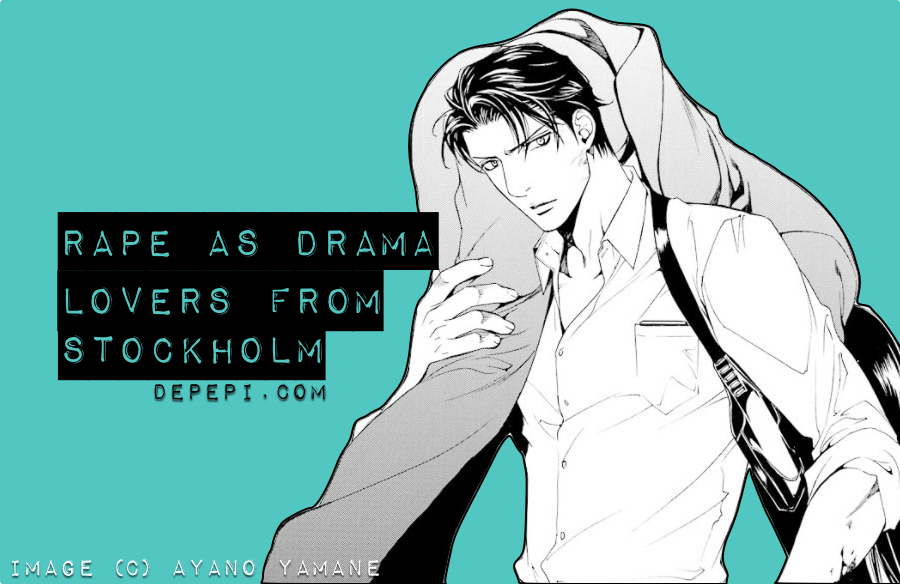 Yaoi manga is a gold mine of tropes. One of my favorite manga is Finder, and its flooding with some of the harshest tropes. Rape as drama and lovers from Stockholm live happily in its pages. Although I’ll be talking about Finder, let’s take it as an example of how media use these tropes to develop stories. Rape is a constant in Finder since we’re dealing with yakuza and the Hong Kong mafia. However, sometimes these tropes are overused.

The dramatic rape trope works as a quick shock for the audience. It’s a cheap device to make the audience get closer to a character while hating another one. Although there’re many permutations, the primary goal is to just surprise the audience shockingly and graphically. In the case of Finder, Fei Long rapes Akihito to make Asami suffer. Later on, the mafia kingpin decides to kidnap Akihito again and while in Hong Kong he abuses him continually. This makes Asami enraged and ready for revenge.

Never forget that in Finder, it’s Asami who first rapes Akihito as a punishment for taking pictures of him. This is another trope: excessive punishment for something ordinary. Asami rapes Akihito several times as the story progresses. He thinks that Akihito is his, in fact, he decided that by himself. The interesting thing here isn’t how the yakuza boss thinks, but how Akihito changes over time. Here’s when the trope lovers from Stockholm takes place.

According to this trope, one character makes something nasty to another one. First, they might hate each other, but then they’ll fall for each other. Finder works as a clear example since Akihito is a clear sufferer of the Stockholm syndrome. Although Asami doesn’t kidnap Akihito at the beginning, in a sense, he does kidnap him mentally. He knows what he does at every moment, and he rapes him whenever he wants. Akihito hates him at the beginning, but after a while, he starts falling for Asami. The “brat” argues with him, but since Asami comes to his rescue, again and again, Akihito starts seeing him in a different light.

Then, Fei Long kidnaps Akihito for real and brings him to his stronghold in Hong Kong. He tries to brainwash Akihito, but he has already “been trained” by Asami first. By the time Asami rescues Akihito, he has already started feeling something for Fei Long. He still longs for Asami, but he has developed a relationship with Fei Long strong enough for not wanting the Hong Kong mafia boss to end up dead.

The problem of the trope lovers from Stockholm is that it creates an unequal pairing. It’s easy to see that with Asami and Akihito. Akihito is young, inexperienced, and works as a freelance photographer searching for a hot scoop. Asami is a yakuza boss in his thirties who is used to get whatever he wants. Asami set his eyes on the freelancer, and he got him getting a piece of the youngster at a time. Even if Akihito learns, Asami will always know better. In many movies the trope works with the same dynamics; a professional kidnaps a woman, who is reluctant at first. He tries to help her and keeps with the kidnapping, and soon she starts thinking about the guy as a kind one, and so on.

Finder is as alluring as hard to read because of its tropes. This yaoi manga has so many tropes that it’s perfect to study them. However, tropes can become a waste stone when abused. Game of Thrones is famous for the abuse of dramatic rape. There’s so much sexual violence in the it that it feels like a significant part of the show is just a huge trope device machine to just shocking the audience. Many comedy movies use the Stockholm game to match their characters, but at a certain point it all feels forced, or all movies feel the same.

At this point, which of these two tropes do you feel is the most damaging?

—
Copyright: Top image on this post made by dePepi with a (C) Ayano Yamane image / Memes & Gifs (C) by their owners / You can find the gifs on Bondagesexual.

The Vocabulary of Fandom: M