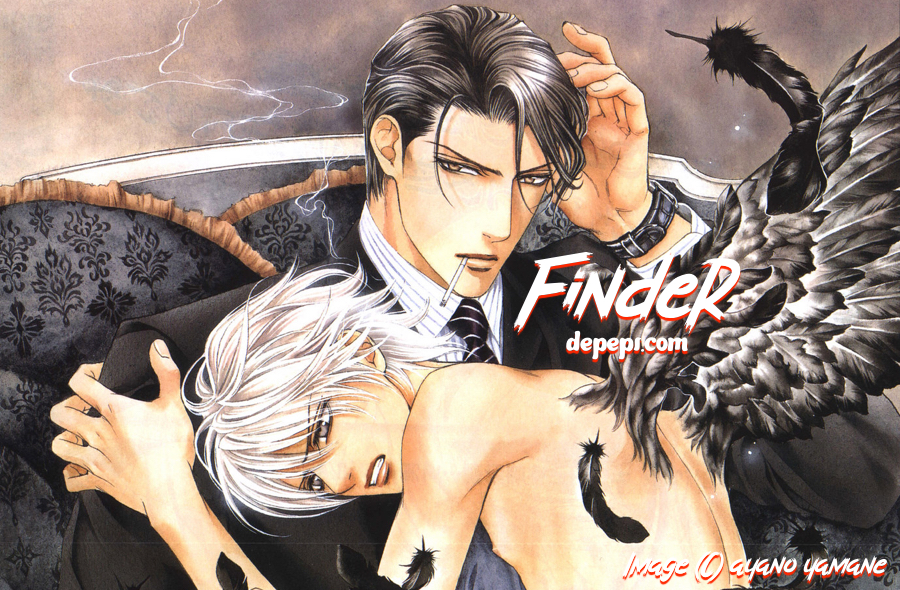 Finder Vol.2 [The Book Depository] [Waterstones] gets very intense. Ayano’s manga is not only a masterpiece of yaoi, but also an amazing crime story. This second volume has some sex in it, however, it shines for its intrigue. In it, we get to know why Asami and Fei Long have such bad blood between them. We also get so see how difficult and dirty Asami’s world really is. Asami’s been in the business for a long time, and we will grasp more about him in this volume.

We start the manga with Akihito working in a wedding. While he’s just doing his job, a policeman approaches him for help. He tells him some juicy information about Asami, so Akihito decides to help him.

They go to one of Asami’s many clubs, called Sion. It seems that some fishy business is happening in there. Thanks to the policeman, Akihito can get in, only to be trapped by Asami when he sneaks into the camera room. Asami wants to stop him from getting in more trouble than he already is. And, why not, having some extra fun with him. Although it does seem that Asami is toying with Akihito, at least from the youngster perspective, it feels like Asami is falling for the brat.

Asami’s love is a twisted one. Although Akihito seems to have no option at the moment, and although he says that he won’t fall for the kingpin, Akihito is certainly falling in love with him. The problem is that Asami is having too much fun having Akihito rebelling. If Asami’s men are just doing what he wants, it’s also appealing having someone that won’t unless you trap him.

At this point, I think it’s quite obvious that Akihito has the Stockholm syndrome. He’s gone through quite a lot, and he’s coming back to Asami, the first person who got advantage of him. This is a trope that you can find in many yaoi manga. Asami is like a predator who knows exactly what to do to get Akihito go back to him. Maybe that’s one of the reasons why he lets him free doing his job instead of having him into a cage.

Asami ends up lecturing Akihito and showing him how the policeman used him to get closer to Asami. Remember that Asami is older than Akihito and knows all the tricks in his underworld. So, Akihito is slowly learning how things work and how people that seem good take advantage of him.

Then we get to understand the rivalry between Asami and Fei Long. Seven years ago, Asami went to Hong Kong because a politician there, and also a connection, asked for his help. It turns out that politician was the DNA father of Fei Long. Fei Long’s adoptive father is the kingping, and he welcomed him to his family as a favor to that politician. Fei Long has a brother, but he’s reckless and wishes their father to die soon. He’s sick, and he craves for power.

Asami ends up caught up in the middle, between the corrupt politician and Fei Long’s feelings. Although the corrupt politician is the real father of Fei Long, he doesn’t care much if he lives or dies. In fact, he ends up shooting him, and not Asami as he claimed in the first volume. His adoptive father dies, and he thinks it was Asami who did the deed, when in fact the one messing things up was his brother, who ended up shot by Asami.

But before all that mess happened, there was some romance between the two of them. And unlike what happened with Akihito, Asami doesn’t want to take Fei Long by force. I’m not sure it’s because he sees him as an equal, or because at that time he didn’t considered it proper. However, we do know what happened when he first met Akihito! Also, Fei Long was quite naive, and didn’t think he could do anything with men. Now, remember what he did to Akihito…

The Underworld life is rough, and it has hardened both men. They have a feud, and it seems that Fei Long has gotten everything wrong. He thinks it’s all Asami’s fault, when in fact it was a mess because of his brother and the expectations of his DNA father. It was Asami who made it possible for Fei Long being the boss in Hong Kong. Now, try to explain that to the super hurt Fei Long… I hope he’ll understand in the future, but it seems a long way to go until the feud ends up without anyone being hurt.

I’m keeping up reading Finder [The Book Depository] [Waterstones]. I would be mad if I stopped now. I’ve got three volumes, and three more are on their way home. I wonder what will happen with Asami, Fei Long, and of course Akihito. Will the brat stop being into trouble? How many times will Asami save him? And, when will they say I love you to each other?