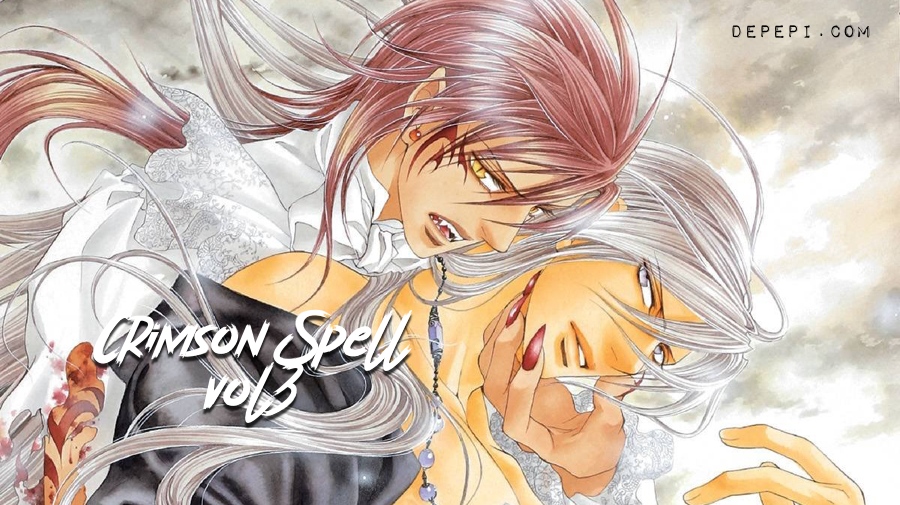 Crimson Spell Vol 3 [The Book Depository] [Waterstones] has a lot of action. Havi was kidnapped by Gileh and his evil master to use him as bate to trap Vald. Once captured, Vald ends up fighting the sorcerer. Havi is cursed and cannot stop himself from fighting Vald. And while all that happens, Gileh uses a demon in disguise of Vald’s little brother to make him angry. The purpose is to enrage Vald into becoming his demon self and ravage everything. In doing so, they’ll control him and all his demonic power.

However, the love between Vald and Havi is stronger. So much so, that Havi is able to pull a trick despite being cursed. Although Vald won’t like it one bit, the sorcerer uses his last trump to help Vald.

During the fight, Vald asks Havi why did he kiss him. While Vald ends up fighting the other demons, Havi thinks in his mind the answer. “Because I love you.” At that moment, he casts some small magic, but he makes Vald hold his sword. The sorcerer approaches it and stabs himself. Vald, stunned lets the demon self take over, and all his rage and pain shows up. The devil Vald is different this time, more powerful, more devastating, and with infinite sadness.

Fortunately, Halrein, Rulca, and Mars arrive at the spot. Halrein spots the fallen Havi and starts trying to revive him with magic. The sorcerer was thoughtful enough as to cast a come-back-spell. However, without the help of Halrein, it’ll be useless. So, while Halrein tries his best to revive Havi, Rulca ends up fighting Vald who has gone berserk. Rulca transforms into a giant bunny-like creature who tries everything to stop Vald from hurting himself and others. In short, they try to prevent him from making things worse.

Halrein, though clumsily, is able to revive Havi. However, the sorcerer is weak. The first thing he does is go near Vald and try to calm him down. At this point, Vald collapses in his arms. They carry him to a nearby room once the demons disappear. When Vald wakes up, he still believes that Havi is gone. But soon Rulca tells him that the sorcerer is healthy and sound in the dining room.

Vald goes there, and first, he rejoices, and then he’s angry. In fact, he punches Havi in the face. Then he goes quickly to his room. He stops in front of a huge mirror and sees his figure. He notices the marks on his skin, his hands, and his hair. But, the most discomforting part of him isn’t the devilish looks but that feeling that’s growing in his chest. He feels for Havi, and he cannot stop it.

Havi goes after him to apologize. They both exchange a sweet and shattering conversation. Vald doesn’t know exactly what’s going on and asks Havi. The sorcerer loves him and explains the best way he can that their connection goes beyond breaking a curse. Havi refers to love, of course. Vald is still confused, and yet, they kiss. Vald can’t stop himself from kissing Havi, touching him, embracing him.

They end up making love several times. We can read the thoughts of Vald. He’s still coming to terms with their relationship. He should be angry, he thinks, but then he takes a look at the sleeping sorcerer, and he cannot feel that way. And when they end up making up again, he thinks that he’s beautiful. Even if he’s doing “shameful” things, he cannot stop the feelings he has for Havi.

When they stop their sexy times. Vald is out refreshing himself. As a teen, he just thinks about what happened and rolls on the floor blushing. That part is cute since we can see how he evolves and loves more and more Havi. And then, something unexpected happens. He follows a strange light on the sky until he finds a passage in what seems a forgotten tower. Inside, there’s someone trapped. In getting close to it, he breaks the spell and frees Limris.

However, Limris appears to be quite suspicious. To make matters worse, Rulca isn’t with the group. The last panel of the volume shows us Rulca injured and without consciousness somewhere. What will happen next? Crimson Spell [The Book Depository] [Waterstones] is getting more and more interesting.