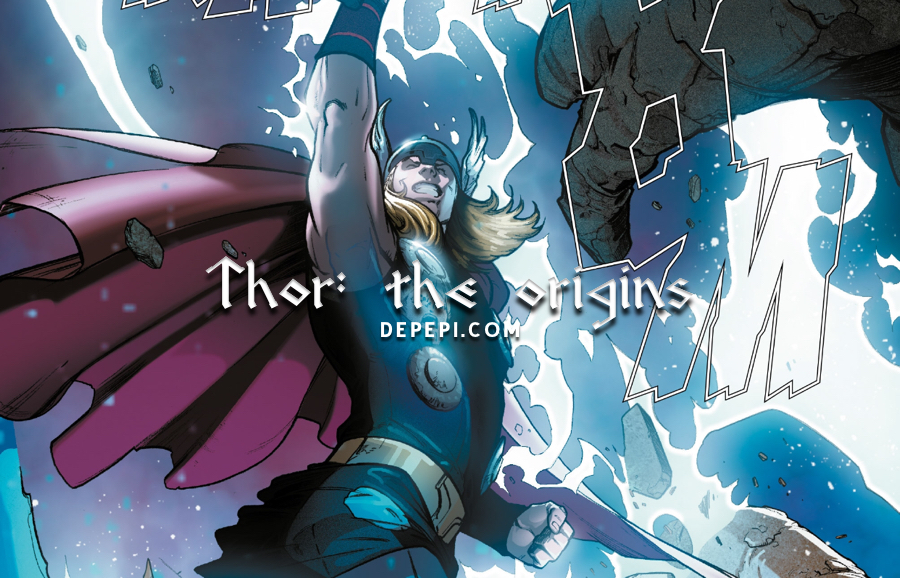 This THORsday we continue reading Thor: Worthy Origins [The Book Depository] [Waterstones]. Previously, Odin sent Thor to Midgard with all his memories wiped out. He believes he’s a doctor, and has a girlfriend, Jane Foster. When they take a vacation, the powers of Thor suddenly awaken so he battles a monster.

However, he’s far from remembering who he truly is. He has a double personality, now and he’s confused. As a human, he relies on a staff to walk. However, that’s Mjolnir in disguise. Despite telling Jane what happened, she cannot accept that he tells the truth. Is he just a human doctor, or is he the Thunderer?

Meanwhile, in Asgard, Heimdall tells Odin that Thor has awaken. But Odin doesn’t believe he is, since his son is still dreaming. Loki has won the trust of Odin, but his true intentions are far away from benevolent. He has align himself with the Jotuns and he’s preparing for war.

This issue is very interesting because we see Thor torn appart with his two identities. On one hand, he’s a weak human who can safe lives as a doctor. Being powerless doesn’t mean that you can’t do anything to help people. And yet, his Thor persona wants to pop up with all his arrogance. And that might be exactly the problem. He likes fighting far too much!

Jane is proving to be a distraction for him. Even if they love each other, and even if they have plans to run a clinic together, she’s preventing him from seeing his true self. She’s obviously afraid that she’ll lose him. And while this happens, the Doctor practices letting Thor come out without telling anything to Jane.

It’s hard to believe that your boyfriend might be a god, however in this case it’s true. Having no choice, the human self of Thor decides to keep trying. He has tasted the thunder, and he wants more.

Thor’s double personality is a very interesting concept. His weak persona saves lives in a different way his godly self does. However, they both have the wish to help. And they both rely on a tool. While the human relies on a walking stick, Thor relies on the Hammer. Both need a tool to channel their energy. The human for walking around, and Thor to smash the villains.

It’s also interesting to see how both personalities start to merge little by little. In a way, Thor now is like Loki. While Loki has two personalities that switch according to his mischief levels, Thor’s are there because Odin made a second personality appear. Sometimes our parents make our lives harder. They might want to teach us a lesson, but some ways are really not the way to do it. Odin is really bad at parenting!

How will Thor merge both personalities? Will he just forget his human personality and come back to the arrogant God he was? (I bet that you know the answer already, but Thor: Worthy Origins [The Book Depository] [Waterstones] is just too good to forget it on a shelf!)

The Vocabulary of Fandom: H