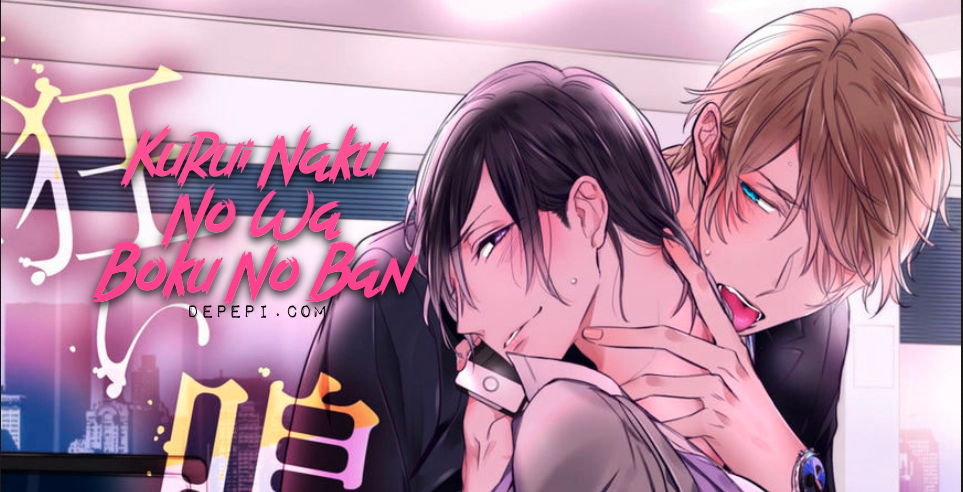 The Omegaverse is as surprising as shocking. I found Kurui Naku No Wa Boku No Ban (it’s my turn to moan insanely) [The Book Depository] [Waterstones] [CDJapan] and I cannot get over it. The Omegaverse can be as brutal as beautiful. It has charming characters, but also disgusting villains. In this Universe there are more than just two genders at birth. Men and women can be alpha, omega, or beta. The alphas are members of the high society and use to have the best jobs. Betas are in the middle, and omegas are the lowest.

Omegas are different from everybody else. During puverty their bodies change and start creating sweet smell and hormones. When they have the heat, they need sex. If there’s an alpha nearby, they’ll go crazy and even attack the omega. So, yes, rape in this world goes rampant. Omegas need to take a special medicine to repress the effects of their heat, and the strength of their smell.

Moreover, in this world, males can get pregnant too. So, Omegas need to take contraceptives too if they don’t want to get pregnant. Families come with many different shapes and combinations. Plus, drama can go over the roof! Takaba is an alpha and hates omegas. His dad was an omega who sold his body in exchange for money to raise his kids. Takaba doesn’t know who his other dad was. Because of this trauma, he seeks places where there are only betas. However, the company he chose does has an omega, and it happens to be his boss!

Karasuma is an omega who is working in a high position in a company. That’s unheard of omegas, who are considered the lowest of society due to their gender. However, instead of feeling ashamed, he uses sex as his weapon to control alphas and make deals for the company. When he meets Takaba and discovers that he’s an alpha starts to toy with him. Karasuma only has sex with alphas with a higher status because he can get something from them. However, he’s curious about Takaba.

Utoh, Takaba’s working mate, gives him some advice: don’t enrage the boss. It seems that Karasuma does have a very bad temper and can get you in trouble if you cross him.

Takaba has daddy issues, and he’s overlaping Karasuma with him. While Karasuma is shameless and tells him what he thinks about alphas (pure hate), Takaba ends up telling to his boss all about his dad. Moreover, he also does something unexpected for an alpha. He tells Karasuma to treasure himself more. Takaba hates being an alpha because he hates losing control over his emotions when an omega goes in heat. Therefore, he hates omegas for that as well. On the other hand, Karasuma hates alphas because they only see him as a hole. To take control, he uses that to his advantage. But it does have a cost: he is numb and can’t trust anyone.

Only Utoh is able to help Karasuma when he goes rogue. However, the boss is teasing Takaba, like if he wants to proof a point. In toying with him, small details speak volumes about Takaba. He does feel that Karasuma doesn’t value himself, and he does need to tell him. He goes as far as to try to control himself when Karasuma tempts him and pulls him to the edge. So, their relationship is rocky at best, but Takaba is getting little by little under Karasuma’s skin. And so does the boss under Takaba’s.

Karasuma hasn’t bond with anyone. In the Omegaverse, when an alpha bites on the neck an omega in the climax of lovemaking, they’re bonded. From that moment on, the omega cannot have sex with anyone else. In fact, their smell changes, and only the alpha who bite them can get high with their smell.

Then, something unexpected happens. The ex-boyfriend of Karasuma, Tobinaga, appears in the office. He’s working for another company where everyone is an alpha. Karasuma ended up with this kind of behavior, and arguing that he doesn’t want to bond with anyone because he values freedom above anyting else, because of his ex-boyfriend. This guy promised Karasuma that he would bond with him if he could climb up the corporate ladder using sex until he’d become his equal. Well, when he did arrive, this disgusting guy just left without telling him anything. He left him heartbroken and all messed up.

Takaba starts working on a project for Tobinaga, the client, under the supervision of Karasuma. Tobinaga is big trouble, and he goes as far as to ask Takaba if he has had sex with the boss. Despite all the teasing, he hasn’t. They have played around, but it was mostly teasing. Takaba only has respect words for Karasuma. But Tobinaga isn’t pleased at all.

Tobinaga starts bullying Takaba. It seems that he’s in a fight to see what alpha is stronger. Tobinaga wants Karasuma alone and wasted. And because it seems that Karasuma likes Takaba, he’ll do anything to put the guy down. So, he asks to redo the whole project from zero, and Takaba is having a hard time at the company. So much so, that Karasuma intervenes for him. That means that he ends up going to Tobinaga’s office and has sex with every awful alpha shark there.

While he’s at it, Tobinaga phones Takaba to gloat. Hey, here’s your boss the Omega, and we’re having it because we’re powerful and all. Takaba looses it and goes to the rescue.

When he arrives at the office, he ends up watching the torture to Karasuma. He cannot do anything else but watch. However, once they’re both out and save in the car, Takaba opens his heart. He cannot stand it anymore. Every time someone else touches Karasuma he looses it. He’s suffering because he loves Karasuma. His boss is shocked first. He values himself very little, but he loves Takaba as well. He’s filthy and has had too much sex with too many people. And yet, he wants Takaba. And yet, he wants to be bonded.

This part is cute because they open their hearts and they head to Karasuma’s place. While Karasuma cleans himself, Takaba is left in the room. He’s terrified. He hasn’t done anything like that before, less biting anyone. He’s going to be bound to Karasuma. He’s so nervous that it’s cute.

Before doing anything, Takaba asks Karasuma to open his heart and explain to him everything. And so he does. But he also tells Takaba that he hasn’t taken any suppresants and at a certain point Takaba will lose it. It’s sweet, because when Takaba ends up losing all reason, he can only think how wonderful Karasuma is. It’s not forced, but beautiful. (And that’s telling a lot when you think about how this Omegaverse works!)

They end up having sex, and in the climax, Takaba bites Karasuma. The boss is finally bonded with someone. They’re mates, and Takaba doesn’t plan to leave him ever in his entire life. Now Karasuma has to figure out something because he cannot use sex for blackmailing anyone. (Yup, he was taking videos of all the hateful alphas.)

This yaoi manga is sweet and terrifying. Karasuma and Takaba’s life is pure drama until they meet each other. It’s not your conventional love story at all. The world where they live is horrific. Omegas have to shy away from society and be very careful otherwise they can end up beign used and abused very easily. Alpha’s tend to be bullies but Takaba is a good guy. His life experience is odd for an alpha, but where there’s one, there’re many. Seriously, the Omegaverse is terrifying. And yet, I couldn’t stop reading. I wanted to know what happened next with these two.

I love the artwork of Kurui Naku No Wa Boku No Ban (it’s my turn to moan insanely) [The Book Depository] [Waterstones] [CDJapan]. Kusabi Keri’s style is elegant and refined. Despite the brutality of the Omegaverse, I want to know more about it. Plus the artwork is too good to not keep reading and enjoying it. The next volume is about Utoh, the beta. I wonder what will happen to this guy.

Tropes: Don't Touch It, You Idiot!