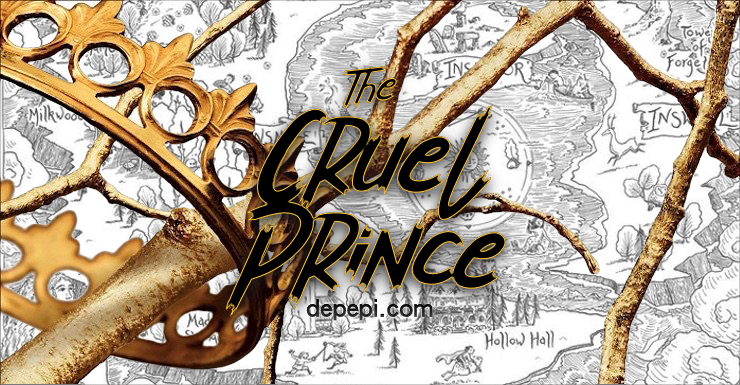 If you love different fairy tales, you’ll love The Cruel Prince [The Book Depository] [Waterstones]. Holly Black creates a brutal fantasy world with drunk fairies, desperate humans, and hipster characters. This book is full of surprises, deception, and treason. There are blood thristy generals, drunk princes, cruel tricksters, and a girl who wants to belong in all that mess. The book is a fierce ride that will consume hourse like minutes. And whitout realizing it, you’ll hit the last page and thirst for more. Now the torture begins in waiting for a whole year until the next book hits the shelves.

The Fae world is located next to ours. Fairies might even take vacations in our world. If you ever come with some leaves instead of bills in your pocket, you know you’ve been charmed. While this might sound innocent, kidnapping doesn’t sound that fun.

SPOILERS: this post contains massive spoilers from the book. It’s a masterpiece of riddles, treacherous fairies, and family drama. It also has great amounts of bullying. If you have suffered bullying like me at school, this can trigger some memories. If you don’t feel like you can handle them, then try this book another time.

Vivi and the twins, Jude and Taryn, live a happy live with their parents. They have a TV, toys, and spend their lives in a boring way in the mortal world. However, one day Madoc appears on their door and asks about their mother. Things don’t go well, and he murders her and the children’s dad. Vivi is Madoc’s daughter, and out of responsibility he takes the twins along with him to the Fae world.

Madoc rases the three girls with more or less success. While the two humans try their best to fin in Faerie, Vivi rebels and doesn’t want to know anything at all. It’s Jude who wants to follow the steps of Madoc and become a warrior. There’s only a problem: she’s human. She needs her father’s approval to try her best to become a warrior but he doesn’t give it to her.

Meanwhile, at school, Jude and Taryn are prey for the bullies. Prince Cardan and his friends are cruel, and their pranks are as dangerous as death itself. Even if the twins have all possible things against magic, there’s so much iron and salt can do. Jude is enraged from all the bullying and not being able to even try in being a warrior. She starts a war with Prince Cardan, one she can’t possibly win. And yet, she tries her best. And one day, she gets under his skin. She might be mortal, the daughter of clay, she might be rotting away, he might win, but she’ll be there stealing away all she can. Because she has nothing to lose.

In Cardan’s circle there’s Locke, a foxy fairy who takes interest in Jude. Soon they flirt with each other, but Tary doesn’t like that. Although Taryn has a darling, she’s not allowed to tell her sister about who that might be. To make matters worse, Jude’s fights with Cardan make Taryn very uncomfortable. Taryn wants to belong in a different way Jude wants.

The more Jude fights, the more distant she gets from her twin sister Taryn. However, this makes her being closer to the rebel Vivi. Prince Dain notices her and asks her in his service. While Jude wanted to be a warrior, Dain is thinking about her as a spy. Being a human is a perfect thing in Faerie, because she can be unnoticed and gather information for him. Plus, she can lie, a thing fairies cannot. She accepts after asking for being free from control from the fairies. Dain makes her free from all except his, so he’s the only faerie who can compel her to do things she doesn’t want to do. And so begins her new carreer as a spy.

The coronation of the new King is close. There are two brothers that could be so, but everyone knows that their father will choose Dain. The problem is that there’re rumors of assassination. Thus, Jude starts to gather information to know who that might be. All arrows point at Balekin. When in a mission at Balekin’s state, she enters into Cardan’s room. Prince Cardan is living with his brother, and it seems that she had the wrong idea about him. Cardan is cruel and incredibly mean. Balekin tortures Cardan in the cruelest way possible. He compels a human servant to flog him mercilessly. No wonder Cardan hates humans so much. Prince Cardan isn’t good at all with the sword, plus he seems to be drunk most of the time.

She gathers information and brings it back to Dain. But things get nasty with Prince Dain. And the reason will shock you. When one fairy from Cardan’s circle tries to compel Jude to kill herself, she ends up stabbing him with an iron knife. She didn’t kill him, but she did wound him badly. Days after that, Dain appears at her house and orders her to put a blade through her hand. And she does, without any magic, to show him her loyalty.

To make matters worse, at night the same fairy enters her room trying to kill her again. But this time, she kills him for good. She hides the corpse under her bed first, and when no one is looking, she digs a grave for him next to her house. If either Dain or Madoc, her father, discover this, she’s dead for good.

While she discovers and unravels more mysteries around the possible assassination of Dain, Jude gets shocked like the rest of Fae during the coronation. Balekin appears, backed by Madoc, and kills almost all his family. Only Prince Cardan survives because he’s late and drunk somewhere in the party. When trying to get out from there, Jude spots him and brings him to the spy safehouse within the castle. Dain is dead, and now she has a very valuable prisoner, Prince Cardan. And so, she must team up with the biggest bully of all.

But before she sees the king’s family buchered, she discover’s that Taryn’s lover is no other than the foxy Locke. Jude doesn’t love him, but she’s completely shocked by all the lies Locke told her. Now she has to play a dangerous game to be able to put a different king on the Throne. Madoc’s kid, her brother, is too young. If the kid would be king, then Madoc would be the regent, and then all hell would break loose. Madoc loves war, so you can imagine the future.

She ends up making a bargain with Cardan after kissing him passionately. For all the hate they feel for each other, it seems that they both confused hate by love. (I wonder how that one will end up?) So, she tricks Cardan into helping her. I won’t tell you more spoilers at this point, you’ve got already plenty.

The lies are so many, the tricks so vast, and the bloodshed so impressive that you’ll be gasping every time you flip a page. However, the book has magic, because it feels balanced and you won’t be able to stop reading. It feels like being compelled by the fairies themselves!

The book hit home hard. Jude is prey of bullies, and things go wrong very fast. I had the same problem at school. And like in reality, it turned out that one of the big bullies was so cruel because he had a hard time at home. Prince Cardan is cruel because he lives in fear of his brother Balekin. He tortures him daily. The rest of the family doesn’t give a damn about him. No wonder he ends up with that grim personality of his. Plus, he’s an alcoholic. To keep it up, he empties the bottles as fast as if they were water. You’ll start hating Prince Cardan, then you’ll start pitying him. And you’ll finish wishing redemption for him. Somehow I want him to be happy and be aware that all the things he did were wrong!

Jude is becoming a monster. I know that well too. If you want to survive the bullies, sometimes you have to play dirty. But it isn’t pretty and it leaves a bad taste.

The Cruel Prince [The Book Depository] [Waterstones] is brilliant, a perfect mirror of what happens when violence is within the family, and how easily corrupted you can be when someone gives you some power. The powerless will be merciless, the unloved will crave it. And yet, there’s hope even in the darkest places.

Loki: Journey into Mystery. Only Thor.