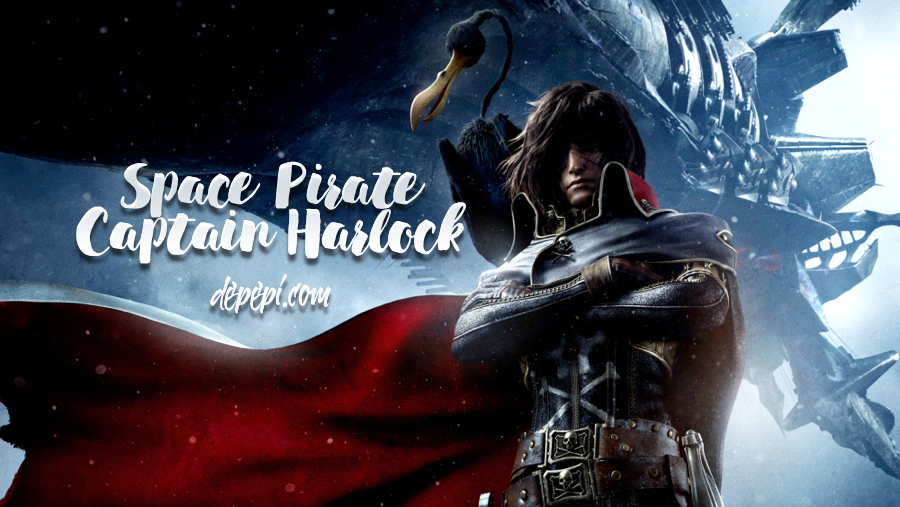 I found a jewel on Netflix: Space Pirate Captain Harlock. Harlock is a dear character to me since it’s my first crush. When I was a kid, I would stay until late to watch the anime. Harlock, the rebel, gave me enough fuel to imagine that anything could be possible. Imagine my surprise when I discovered that the new movie is on Netflix! I wasted no time at all, and I watched it (already far too many times).

Captain Harlock is a space pirate who represents the ideal of freedom. Humanity discovered how to travel faster through space. Thanks to that, they built colonies in thousands of planets. However, humans outgrow the capacity to repatriate its people. That’s how the Homecoming War began. Different factions fighting to get back Earth. An authoritative government (the Gaia Coalition) declares Earth a sacret planet, and no one can go back.

[SPOILERS: this post contains massive spoilers of the film. I recommend to watch it before reading this post.]

The coalition sends Gaia’s Fleet to defend Earth. It’s lead by a young Harlock. And things go so wrong, that he goes rogue and becomes a pirate who cannot die. In fact, he starts messing with the Gaia Coalition for a hundred of years! His ship uses dark matter, the same obscure energy that according to the “good guys” makes things go wrong.

Captain Harlock uses to take new members of his crew going up and down the Universe. Those who pass the test can be members of his team. Yama infiltrates Harlock’s ship as a spy. He initially intends to kill the captain as his brother wants. However, he’ll soon realize that things aren’t as simple as that.

Kei, one of Harlock’s closest crew members, tells Yama about the captain’s plan. He wants to start over, giving freedom to everyone. Soon, we discover that what Harlock intends is to end life as we know it, to make something else appear. However, after Yama comes to grips that his brother is the real villain and not the Captain, plans change. When they discover that Earth is but a hologram, and what is left is almost a barren planet, they decide to pass the information to everyone to free them all.

There’s a lot going on for Yama. He became a spy because of his brother. He cannot walk because of an accident Yama provoked. So, he became his walking hand. Yama’s family drama is what makes him swing from evil to hero. In the movie, the pirates are the heroes. And the members of the Coalition are the oppressors. The problem is that Yama’s drama is affecting Harlock’s head.

Captain Harlock has a drama going on in his head. His trauma is a huge one. He is the one who destroyed Earth in the first place. All in the name of freedom. In the hopes of fixing the mess, he opts for the most radical medicine: start the game from the beginning.

It’s Yama’s actions that make the Captain think twice. His ship and his crew are a symbol for freedom. People don’t need Earth, but the truth. And since the truth will free them, they’ll only need a reminder of that freedom: Harlock.

It’s a long and exciting movie that has impressive graphics. It’s a long movie, and yet it felt that everything was happening very quickly. There’re many mysteries, and while you discover what’s going on, you’re getting more and more surprised.

Harlock has always been one of my darlings. However, in this movie, he looks very handsome. He wasn’t that pretty, although the anime was brilliant. Of course, he was a badass pirate who thrilled me even if he didn’t look as he looks now in this film!

Harlock is an antihero that thrills and chills. And his crew has had an upgrade too. The similarities with the manga and anime are all there. However, the artwork results here are just staggering. Plus, the story is compelling enough to make you want to know about Harlock.

Thanks to this I’m reading Captain Harlock’s manga [The Book Depository] [Waterstones] again. This is a classic that everyone should read. Well, specially if you love rogues and bad guys doing the right thing. Can you resits him?