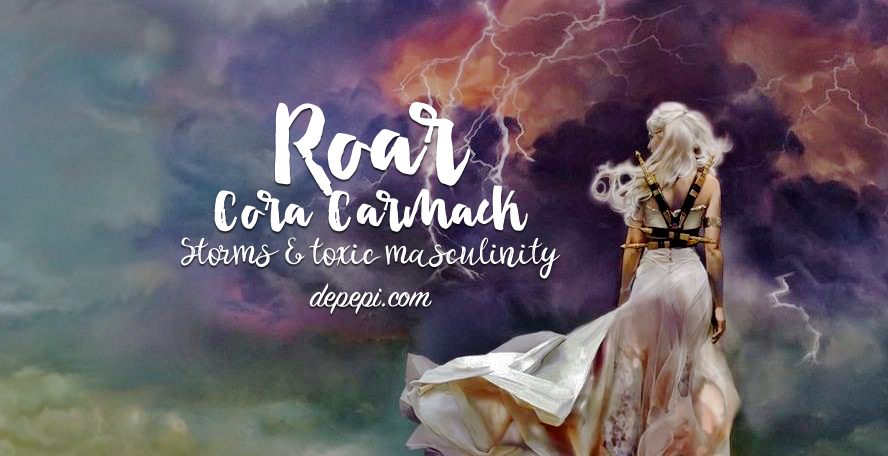 I finally finished Roar by Cora Carmack [The Book Depository] [Waterstones]. It’s a fantasy novel full of magic, storms, and an incredible wold. The world building is staggering. However, there’s just a small, and yet huge, flaw: toxic masculinity. Maybe the author is building it in this way for a massive change in the second book of the series. Maybe it’s a real flaw. We won’t know until we read the next installment of the saga. Whatever the case, Roar’s world is staggering and compelling.

Storms run amok the lands, killing and destroying at their path. Stormlings are the ones that rule because they control magic and protect people from the storms. Aurora is the Princess of Pavan, soon to be married with a Prince of Locke. There’s just a problem, she has no magic at all!

[SPOILERS: this review contains massive spoilers. Stop here if you haven’t read it yet. If you don’t mind spoilers, be my guest and keep reading.]

Roar has three different names: Aurora, Rora, and Roar. Pavan’s Princess is but a fraud, and she knows it. Her brother could contron the storms, but she has no magic at all. Her mother, the Queen, arranges a marriage with the youngest of the Locke Kingdom, Cassius. He’s dark, tortured, and frightening. He’s Roar’s bethroded, and at first he seems charming enough. However, he has a dark secret: to seize Pavan at all costs. And if that means to charm a Princess to make the Kingdom his, he’ll do it. He’s not alone in this endeavor, all his family is in Pavan just because of that! The Lockes are hiding something far darker and dangerous that Rora can imagine.

When she discovers the plot, she decides to follow the Locke Prince one night. In doing so she discovers a Black Market in the city of Pavan. They sell magic, something completely forbidden by law. Only her kind can manage magic, and there she is in middle of an illegal market, surrounded by Storm magic that hunters have stolen from the hearts of storms.

Cassius is toxic, dark, controlling, and a snake. He believes that when you’re interested in a woman you have to “prod at her fire.” Hence, according to him, pissing the woman you love is the best course of action. He’s possessive, arrogant, and (excuse the word) a dick. He compares Roar to storms. He has to conquer her because she’s as magnetic and appealing as a storm is.

Seeing the lies in Cassius, Roar yearns to own her spot by herself, and not because a Prince can save her. Her mother’s plan is to web her to a strong male and so save face. But Roar has another path opening in front of her, to join a hunters’ group and gain by her own hands the magic she needs to rule her people. She won’t need any Cassius, she’ll be by herself.

When Rora is in the illegal market, Locke, a hunter, helps her. Locke is the nick for the hunter who doesn’t remember his true name. As soon as he meets Roar, he feels a strong connection to her and needs to protect her at all costs. He’s a super protective alpha male. He’s used to a harsh life in the midlands. He had a sister who died, and since then he doesn’t want to love anyone else. Rora changes her name to Roar so that no one finds her true identity. She goes as far as to ask her friend to die her hair.

Although Locke isn’t that domineering, softer, and possesive compared to Cassius. But he obviously doesn’t know his way around women. His firsts instincts are of possession and protection. Roar reminds him of his dead sister, and that’s why he doesn’t want to teach her how to hunt. He accepsts reluctantly, and starts to teach her too roughly in the hopes that she’ll quit. He wants to help her in a different way, giving her the opportunity of a different life. However, that’s not his to choose.

Little by little, Locke is getting more and more obsessed with Roar. The more he tries to pull her away, the more he gets attached, until he cannot hide his feelings any longer. He looses it while teaching her how to survive a storm, and gets too intimate. Nothing happens, but it’s deffinitely not the way he would have acted should Roar been a man. He constantly displays his strength. Even if he doesn’t do anything, this could deffinitely trigger negative feelings on women who have suffered male dominance and even assault.

Cassius would have gone all the way through. Locke stops himself, and knows he’s doing the wrong thing. Still, Locke’s training is abusive. In a land where storms can mess up with your feelings, it’s true that you could end up dead if you let your feelings win the battle. However, this behavior is toxic. While Cassius would go to the end of the line, Locke needs to realize that his behavior isn’t good either.

Locke is overly protective, mainly due to how his siter died. However, his traumas are there as much as Roar’s. He’s too used on bossing around that he even “punishes” Roar with a kiss. She didn’t ask for it. She just defied him, and steals a kiss. It’s burning, and angry. Later in the book, both exchange more than one kiss, and it isn’t like this one.

The problem with Locke is that he doesn’t ask permission for the most part. However, by the end of the book, he’s willing to wait for Roar to go a step further with their relationship. It’s my hope that both characters will change in the second book for the better. Roar will stand up and say to him what’s wrong (or toss him away altogether), and Locke will get rid of his toxic masculinity.

Both Cassius and Locke are examples of toxic masculinity. Despite Locke being one of the heroes in the book, the truth is that he has many issues. However, they both seems to be great examples of how Roar’s world is: unforgiving. Storms come unnounced and ravage everything. Even the funny ones hurt you. Cassius takes everything away, Locke hurts without noticing that he’s doing something wrong. They’re examples of what’s wrong today with the world. Fortunately, we don’t have the storms Roar’s world has.

By the time Roar captures magic, she ends up with it in her heart. She steals the soul of a kid storm. As happens with Cassius and Rora, and Locke and Roar, she’s also unforgiving and does something cruel. Instead of stealing the magic from a big storm, she calls upon one without realizing. It happens to be the soul of a kid who couldn’t rest in peace because he didn’t want to leave his family. He wants to play, and he’s frightening. However, he ends up trapped in Roar’s heart. And from that moment onwards, Roar gets magic powers: she senses when the storm come, she can command them, she can sense souls all around her.

When she discovers what has happened to the Locke Kingdom, destroyed by storms, she convinces the hunter group to return to Pavan. She has magic now, but in the way to Pavan she senses something dark. The darkness comes from a villain. We don’t know his name. We only know that he’s like Roar. He can control storms, call them. He wants revenge on the Lockes, and he’ll destroy everyone and everything if necessary.

The friend who helps Rora escape from the palace and die her hair is Nova. She’s a woman of color who has magic. She an an has anxiety disorder, and keeps all her time trying to hide her magic because it’s dirty. Nova ends up imprisoned by Cassius while Roar is in the wild hunting storms. Cassius tortures her in several different ways. This only gets her stronger with her magic. However, it’s a little bit unsettling that Nova ends up in prison and qualified as someone with dirty magic.

It seems like this book is building up to something way bigger in the second one. First we have possesive males with different degrees of toxicity. Then, we have a woman in prison with anxiety and trying not to show up all her power. And finally, the Princess goes back to her Kingdom after capturing a child storm.

It’s unforgiving, treacherous, harsh, and heartbreaking. It’s a world where even the naive pray on others due to ignorance. Cassius is a nightmare because his family is a nightmare. (The Lockes are horrible!) Locke is overprotective and doesn’t know what a no is because or his harsh upbringing, but he seems open to change. Roar was kept in a bubble in the palace, so she has no idea whatsoever of what’s really going on in the world. And while some people are on top, most of the people are left to survive as they can. If you cannot pay for the citizenship, you have to leave Pavan to the wilderness. And that means death by storm.

Roar by Cora Carmack [The Book Depository] [Waterstones] is hard. Although it was marketed as a romance, I can’t see any good romance in here. I see potential for the characters to change and evolve in the second book. The road is paved for something amazing, but it can also flop incredibly. You might get angry with this book, but I’m willing to buy and read the second one. Who will change for the better? Can Cassius go even darker?