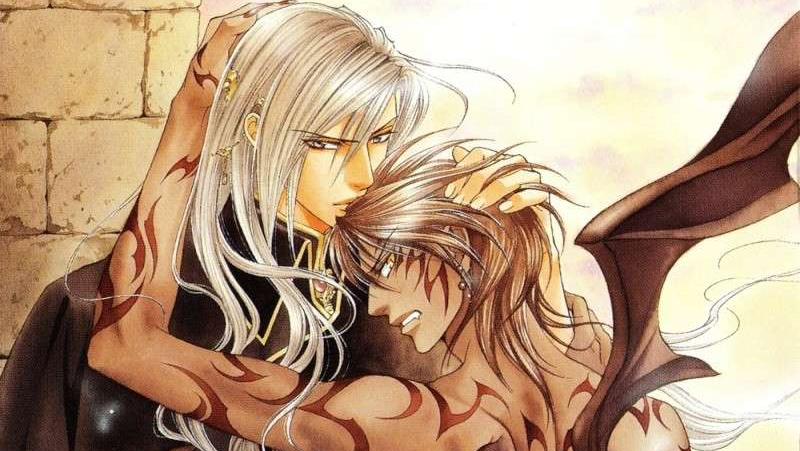 Crimson Spell [The Book Depository] [Waterstones] [CDJapan] is a yaoi and fantasy manga series that certainly surprises. Yaoi is the Japanese word for slash fiction. Yaoi manga is very popular in Japan. When I first went to Japan, I was surprised by the amount of comics in a shop in Akihabara. The whole building is full of manga of all sorts. Yaoi and yuri happened to have a full floor just for themselves!

After a long, while neglecting reading manga, I had a rampage from January, and I read all the forgotten manga I had around. Crimson Spell [The Book Depository] [Waterstones] [CDJapan] caught my eye because of the artwork. Ayane Yamano is one of the Queens of Yaoi manga. Not only you can find smut scenes, but deep plots.

Prince Vald’s country is overrun by demons. In order to save his people, Prince Vald sees no other choice but to use his family’s cursed sword. He saves his people, but he is cursed forever. However, elders of his kingdom tell him to help the services of Halvir, a famous sorcerer that can break the curse. So, he ends up at Halvir’s hut asking for his help.

Halvir happens to be quite quirky. The sorcerer collects rare objects, and so, he agrees to lift Vald’s curse in exchange for the cursed sword. Vald merrily agrees. However, before the sorcerer can do anything, he needs to fetch some items to do so.

Vald seems oblivious of what the curse really does. Every time the demon in him manifests, he forgets what happens. That’s why he sleeps with magical handcuffs. They prevent him to become evil. However, Halvir’s curiosity wins, and he uncuffs Vald, awakening the beast. Demond Vald is a bloodthirsty and lustful demon that needs to release his energy by either destroying everything, or something else. Before the demon can eat the sorcerer, he subdues him and has passionate sex with him. The next day, Vald cannot recall a thing.

And so, the two of them embark on a journey and an adventure retrieving objects, killing dragons, and stealing books. While Vald is kind and pure during the day, at night, he’s a lustful beast. But by having sex with Halvir, the demon spends all his energy in his lust instead of killing people and destroying whatever he finds.

As they travel together, they find new companions, like the bunny Rulca. The rabbit is a mystical being who can shift into a butler when needed. So, at a certain point, the bunny is having fun watching the sorcerer and the demon prince having fun at night. Apparently, the bunny understands little of what’s going on at the beginning.

Vald has a pure heart, but he’s very impulsive. He doesn’t think much before acting, and so he ends up with wounds easily when battling demons, dragons, and other beasts. When the anger kicks, he transforms into demon Vald, and things go grim. He slaughters quicky. Only Halvir can calm him down and turn him back into the sweet Vald.

As time goes by, demon Vald gets more attached to Halvir. What started like a game for Halvir, and a way to gain extra magic power, is ending up becoming a romance. The more time he spends with the sweet prince and the lustful demon, the more in love he’s with both of them.

But things start to go astray. When the sorcerer gets hurt and unconscious, Vald and Rulca end up creating a potion to save him. For some reason, Vald thinks that he remembers the touch of the sorcerer, and he seems to know his lips too. How can that be?

The more Vald turns into a demon, the more his personality is blending with it. While Vald cannot fathom the idea of being with a man, apparently the devil Vald does. The sorcerer ends up so madly in love that he’ll do whatever for Vald, even if it hurts him.

As they encounter more companions along the way, and more foes, it becomes more and more clear that there’s something else to the curse. Someone is moving the shadows to get control of demon Vald. But why!?

Although the first volume starts quite in a rush, it quickly develops as a nice fantasy read. Some people might get concerned about the first sex scene where Halvir takes advantage. But, later on in the story, we’ll find out that demon Vald does the same when he’s been without Halvir’s touch for a while. Demon Vald doesn’t have the mental restrictions Vald does. Demon Vald is okay with whatever sex they do. In contrast, Vald does have limitations, and at first he has doubts about if it’s right to love a man.

There’re many funny parts. Rulca wants to seduce Vald, but he’s unsuccessful. The bunny also loves annoying Halvir. The sorcerer is incredibly greedy and lacks empathy for anyone but himself and Vald. And Vald is the clueless person in the Universe: he has no clue how lusty he is at night. Their chibi versions are also adorable, and humor is delightful.

This fantasy world is set in a European-like environment. The detail in the drawings is staggering, and the story follows a nice flow. There’s as much intrigue as there’s sex. But sex isn’t there just for the sake of it; it helps us understand Halvir and Vald’s relationship and how their characters develop along their journey.

This is a beautiful manga with exquisite artwork. The story is deep but also light. It has very dark moments, but the humor balances it just right. It also develops the characters along the way. At the moment, the one controlling the demon Vald is Halvir, but if for some reason the beast unleashes, it’s going to be him who will manage the sorcerer!

The only weak point in this volume is the beginning. How Prince Vald ends up with the curse feels quite rushed. However, the story gets better soon after. And I bet, it will continue to do so volume after volume.

I highly recommend this series. Crimson Spell [The Book Depository] [Waterstones] [CDJapan]‘s plot is thrilling, and both personalities of Vald are enchanting. Although I have to admit that if I met demon Vald in person, I’d be scared shitless. The magic of this story is that you can get too invested in it and want to read it all in a go. (As far as I know, it has five volumes.)

Writing using Scrivener is a delight