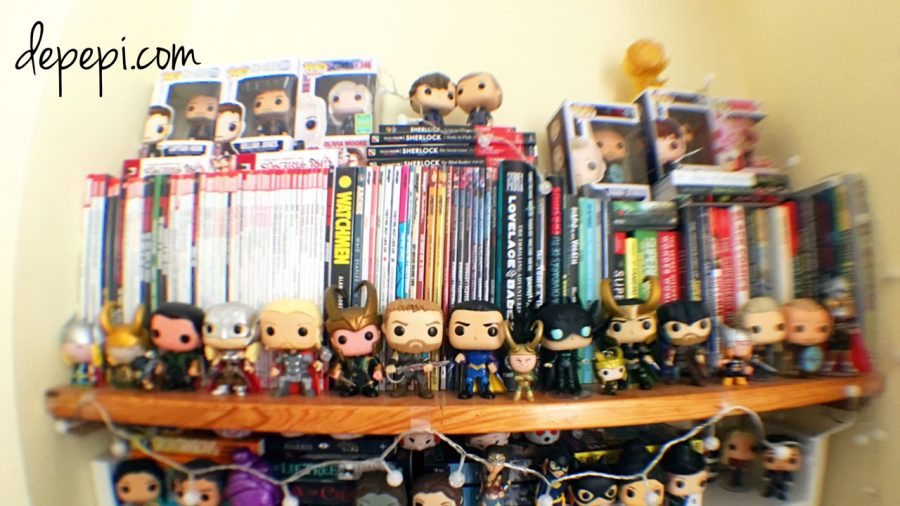 I got a cold so I couldn’t record my unboxing of Marvel Collector Corps Thor Ragnarok’s box. However, I took enough pictures as to show you the great goodies that were inside the box! I haven’t been buying these boxes for a while, and I just bought this one because of Loki reasons. I couldn’t be happier with the contents of the box. However, I do have a small complaint.

[SPOILERS ahead! If you continue reading you’ll find all the contents of the box. By now most of the world should have their boxes, but just in case, I leave the spoilers notice here.]

This box is smaller than the ones I used to get. I suppose that the size of the boxes depends on whatever it’s inside. This time, the design was spooky and unusual with Hela printed on the box. The first thing you find when opening the box is the promotion pamphlet of the next box. Before you use to find a pin and a patch.

And then, the swag! A Hulk beanie! It’s cute, but I’m more used to bigger sizes, so I’m not sure if I’ll end up using it outside home. I like it a lot though.

Then I found a pack of super cool magnets for the fridge. Hela, Thor, Loki, and Hulk! Also, a spinner. On one side you get all the heroes, and on the other hand, you get all the villains. And then I found what I wanted and the reason I got this box: LOKI!

This Funko Loki has a helmet and a different suit than the commercial one you can find in stores. He’s amazing! And then, there’s a Thor prepared for battle. I couldn’t be happier! (To be honest, if this box only had had these two Pops I’d be as happier as with the Pops and all the extra goodies.)

I found Hela’s pin, which is fantastic. And then I found the only real complaint I have about the swag of this box: the card game. You create a card game with the images of Thor and the Hulk, and then you don’t use any image from the film for the cards? They’re just plain poker cards! It would have been amazing if we had had Loki as the Joker, and so on. This wasn’t cool at all.

Despite the cards, and the size of the beanie, this box was a win for me. At the top of this post, you can see a picture with my Norse shelf. It has eight (of nine) Thors, seven (of eight) Lokis, one Hela, one Lagertha and one Ragnar. I’m sure I’ll end up buying more future versions of Thor and Loki, but for the time being, the shelf is super full with Norse Pops.

The new versions are much better than the old ones. They’re way more detailed, and the quality is also better. I didn’t buy any Thor at the beginning because I didn’t like the Pops that Funko created. They were too simple, and they didn’t look much like the real thing. However, now the Pops are amazing!

I’m delighted with Thor Ragnarok’s Pops. I’m still debating if I should include Valkyrie into the collection or not.

If I end up buying more Norse Pops, I’ll need to rethink the order of the shelf. I have a forever growing collection of comics, books, and Pops. For the time being, the Norse shelf looks perfect.

First Week of NaNoWriMo: so far so good