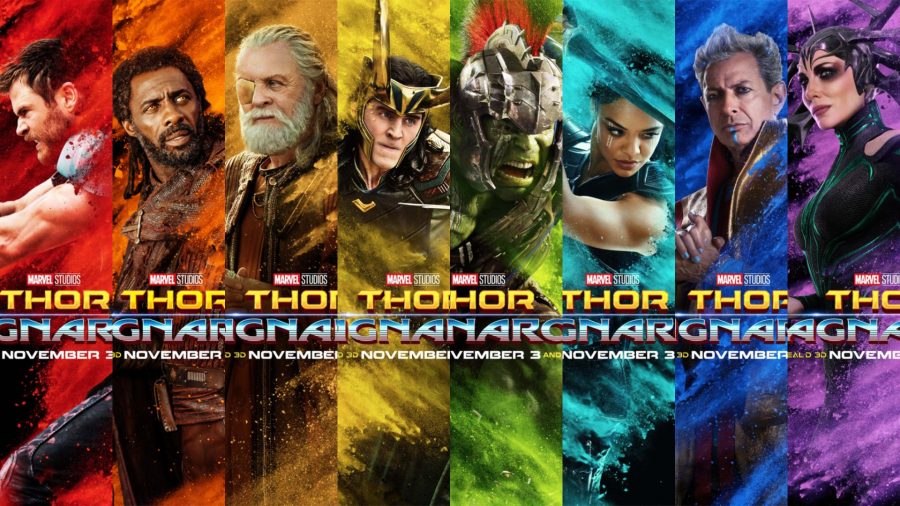 Thor Ragnarok is one of the funniest and more audacious Marvel films I’ve seen so far. It’s just brilliant! We get to explore Thor’s family with a different light. Furthermore, we get to explore Thor and Loki at their best again. We get to know Valkyrie, and a badass new villain, Hela. The movie has unexpected cameos, tons of humor, and amazing visual effects. Also, the soundtrack is fantastic. If Thor Ragnarok isn’t on your list yet, it should. It’s seriously funny.

The movie is a tornado of great music, great fights, incredibly funny scenes, and mindblowing characters. Also, being a Marvel movie, I highly recommend you to stay until the end of the credits.

[SPOILERS: this review has massive spoilers from the film. Stay away from here until you watch the movie!]

We start the film with Thor paying a funky visit to Surtur. Surtur is the one to end up Asgard according to the Ragnarok prophecy. Thor is in chains and looking for information. Soon Thor disables Surtur and brings his helm to Asgard where he finds out what’s going on. Loki is having fun indulging in lavish parties and remembering how Loki is a hero for his people. You can imagine that Thor asks him about Odin, in an entirely angry fashion.

So, they set up their quest to find Odin on Earth. Thanks to the help of Doctor Strange, they see him in Iceland. (BIG SPOILERS HERE) They get to talk to him for a while before he passes away. He tells them that the time for Ragnarok has begun. At the moment he dies, Hela will come back to destroy Asgard.

Hela seems to be Thor’s big sister. She’s extremely dangerous and wants it all: Asgard and the whole Universe. She won’t stop until she can have everyone under her reign. Hela destroys Mjolnir quickly, and when Loki tries to go to Asgard, she follows up. Hela pulls both brothers out of the Bifrost, and they both end up in Sakar.

While Loki ends up being a VIP member of Jeff Goldblum court, while Thor ends up being one of his gladiators. It’s Valkyrie who captures him from the trash yard and sells him to Goldblum. If Thor wins Goldblum’s champion, he can leave as a free man. It happens that the champion no one can win is no other than the Hulk.

It looks like Banner has been the Hulk for two long years, and now he can talk. Goldblum doesn’t like anyone stronger than the Hulk, so he cheated during Thor and Hulk’s fight and made the Hulk win. Hulk is like a toddler, but he has good intentions and ends up having Thor in his room.

Then, Thor starts a plan to bring Banner back, or to get the jet Banner used to arrive at this planet. He finally makes it happen, only for the Hulk to trash the aircraft. However, when the Hulk sees Black Widow’s video in one of the jet’s screens, he starts changing back, and we have Banner back. Banner ends up with Tony Stark’s clothing, with very tight jeans.

They devise a plan to flee Sakaar. But they need help. Thor manages to convince Valkyrie, who has a nasty problem with alcohol. Valkyrie captures Loki, and all of them then devise a plan to go through the Devil’s Anus (the biggest hole that will help them escape the place.) And yes, it’s called the Anus.

Loki tries to trick Thor again, so they leave him behind. He ends up helping revels and flees with them into a giant ship bound to Asgard. Meanwhile, Thor, Valkyrie, and the Hulk arrive in Asgard to find it devastated. Heimdall has been trying to help the people flee from the hands of Hela, but it’s been very challenging. Hela has killed the army and revived her army of zombies, including her giant spooky puppy.

Fighting Hela, Thor ends up (SPOILERS) losing one of his eyes, just like Odin did time ago. And just as Hela is going to kill him, he can talk with his father in his mind. He realizes that his power didn’t come from Mjolnir but from himself. And Asgard isn’t a place, but the people that inhabit it. With a renewed strength he can fight her, but not entirely because she is too strong.

Loki arrives with his cavalry from Sakar, and they all start to fight the zombies, while Heimdall tries to help people to escape. But the only ones left fighting that has enough power to go against Hela realize that it’s not enough. So, Thor asks Loki to start Ragnarok!

So, Thor sends Loki to the castle’s trophy room, with specific guidelines to revive Surtur so Ragnarok can happen. But, he sees one of the infinity stones (remember that glowing blue square he had fun with in New York?), and we’re left wondering what happens next.

Loki revives Surtur, who not only kills Hela but also ends up eradicating Asgard. The Asgardians are left to watch the ruins from the ship Loki brought along with the revels from Sakar. Thor takes the throne, and Loki ends up again at Thor’s side. But for how long? He’s the God of Mischief, after all, so he’ll mess up sooner or later. He would disappoint all of us if he didn’t.

We get two extra scenes at the end of the film. One is spooky because we end up with Thor and Loki surprised at the sight of a very giant and frightening ship that is shadowing theirs. The other is funny because we get Goldblum goldbluming. So, I highly suggest you stay until the end of the movie.

As I said before, this movie is gold. It’s the funniest and more entertaining Marvel movie to date. Also, it has tons of Guardians of the Galaxy vibes. And Jeff Goldblum.

The Vocabulary of Fandom: D