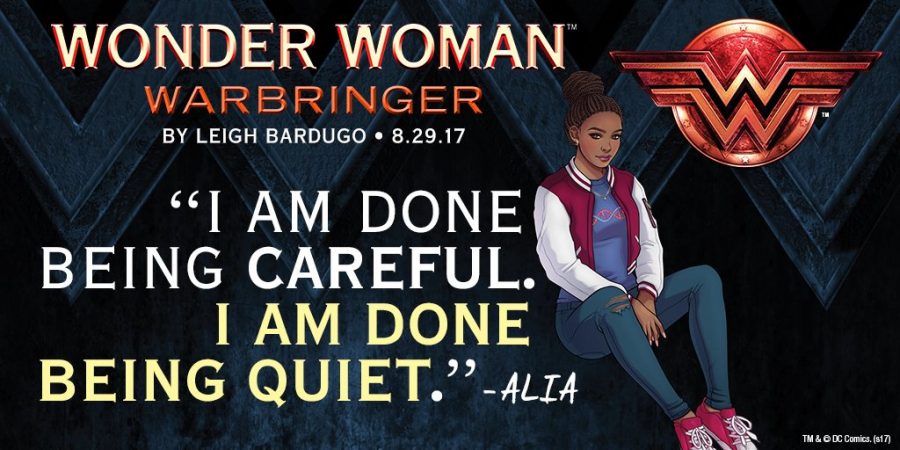 Leigh Bardugo’s Wonder Woman Warbringer [The Book Depository] is a treasure. It’s one of those books that will leave you exhilarated. You’ll learn important while you read, about the characters and yourself. I’m sure that you find the Lasso of Truth compelling, but this book is even more so. It makes you question the world, while it makes you want to be a better person.

There are fights, suspense, romance, sassiness, and wisdom. Plus, the characters are highly relatable. Have you ever felt like a ghost? How do you treat women? Why do you do what others expect from you instead of doing what you want to do? You’ll find out these questions in the experiences of the characters in the book. But, I’m sure you can relate to many of them yourself.

The cast is diverse, relatable, and incredibly well crafted. All of them feel so real that you even think you might find them walking around the streets. Even Diana, with all her might and powers, happen to be just like you and me. And this is part of the magic that Bardugo brought into life with this book. And this is why it ended up being so brilliant.

[SPOILERS: this review has massive spoilers for the book. Before you read beyond these lines, go out and get your copy of the book. Read it, and then come back.]

Diana is in middle of a competition in Themysthira when she saves Alia from what looks like a crash. But, as soon as Alia puts a foot on the island, things start to go astray. First, Diana loses. Second, her best friend gets ill. And that’s impossible because Amazons don’t get sick. Third, the island begins having all sorts of catastrophic events: from earthquakes to severe weather! One thing is sure, Diana must make sure that Alia goes out from the island. But if she does, she might never come back.

So, she visits the Oracle, who gives her dire news. Alia is a Warbringer that descends from Helen of Troy. If she doesn’t die, the island will. If she lives, war will appear in the world of men. But, there’s a possibility to save them all. A quest for a hero like Diana: go with Alia to Helen’s tomb, and bath in the spring that’s there. That will clean her bloodline, and no more Warbringers will see the light. Alia will live without causing havoc. The world will be saved from a hideous war. And the island and her Amazon friends will live too.

Diana manages to put Alia outside of the island, and they end up in New York. After some wondering about, they end up meeting Jason, Alia’s big brother. There’s an excellent love-hate relationship between Jason and Diana. He’s uptight, a jerk, and he’s used to getting what he wants. However, he just met his nemesis: Diana. The surprise comes for Alia when he happens to know all about Warbringers. After promising that they’ll go to Helen’s tomb in Greece with his jet (Alia’s family happens to be rich), they first head to a party.

Alia’s parents died in an accident years ago. And it seems it wasn’t an accident, but someone killed them, just like they tried to kill Alia in the boat with a bomb. There seem to be no accidents around Alia. And it seems there’s a group of people eager to kill her to save the world from the next big war.

They meet with Nim and Theo. Nim is Alia’s best friend, and Theo is Jason’s. The dynamics of the four of them along with Diana are fascinating. Not only in fights but also in witt. We get many good quotes thanks to their conversations.

Needless to say that the party goes badly, and they end up escaping it in the jet. While things go south, they end up running for their lives in Greece as well. Alone, the five of them are set up in their quest to free Alia from her family curse.

But Jason hasn’t told the whole truth. Diana uses her Lasso after he shows up great strength in the jet. He should have died, but there he is: peachy. Thanks to the Lasso, we find out that he has superhuman power, like the heroes of the past. He has been holding back all of his life. Alia is upset because he has lied to her for so long, but she’s also super happy that he’s alive.

Things start to spiral with the appearance of different war gods along the way. Violence in the group also appears: between Nim and Theo. They’re very sensitive to Alia’s powers, while Jason and Diana are immune. They have to continue the quest keeping an eye on them, so they don’t kill each other!

Jason seems infatuated with Diana. And so, we get to have some romance between the two. Also, I suggest you keep a keen eye of what they two say because you’ll get a massive surprise by the end of the book.

Things look impossible, and when they finally arrive at Helen’s grave, nothing significant happens. Until the war, gods appear, and Jason ends up revealing his plans. Those who are in their pursuit now are his army. He wants Diana’s blood to create super soldiers, and bring a vast war that will purge and change the world. He’s even eager to kill her friends for that. He’ll keep Alia alife because she has to fulfill her fate as a Warbringer so that he can become a hero.

The betrayal stings so much that things go south even more. I won’t spoil here how, but let’s say that Diana and friends peculiarly save the day. What I like from this part is the shock they all get, and how we discover who the most courageous and brave characters are. While you follow Jason as someone in charge and control during the whole book, this is the time when you discover where real courage can be found. The final battle has profound wisdom for you to take at heart!

This book is a treasure. The writing style is classy, witty, and yet modern. What Bardugo wrote is a masterpiece!

Here are some of the quotes I loved (apart from the ones you can find in the promotional campaign of the book):

“Maybe it feels easier that way, just being invisible instead of always worrying what people think of you.” (…) “But that’s a choice, too, right? Because people are always going to look. They’re always going to judge, so you can say nothing or you can at least answer back.”
—
Design is all about conveying information. This whole room was built to convey messages you don’t even know you’re receiving.
—
Seeing is easy. The hard part is being seen.
—
We can’t help the way we’re born. We can’t help what we are, only what life we choose to make for ourselves.

If you need an uplifting mood or feeling empowered, this is the book for you. Or, if you want to give a meaningful book as a present to someone, this is it. I just hope that Bardugo writes another Wonder Woman book because this was just perfect.

—
Note: this book contains an affiliate link. I only share things that I love. The artwork in the promotional marketing of the book is Jane Bartel‘s work.

Star Trek Discovery: Love it or Hate it

Great Comics to Read this Week