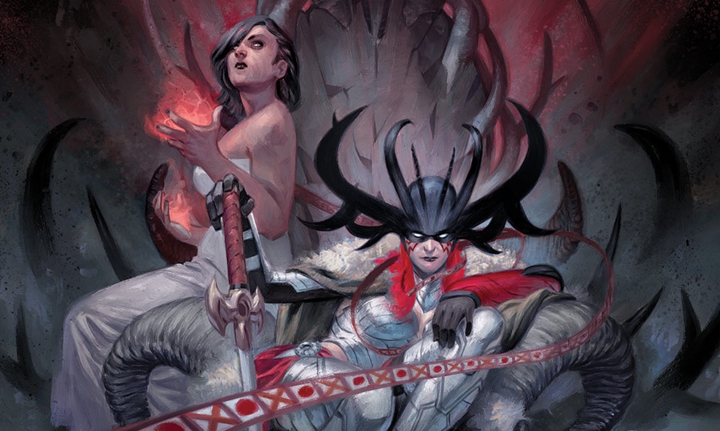 Today we’re reading Angela: Queen of Hel – Journey to the Funderworld [The Book Depository]. Angela is the sister of Thor and Loki. She is an Angel, beings that believe in the motto: “Nothing for nothing, everything has its price.” Angela is tough, rough, and a great warrior. But she felt in love with Sera. In her quest of freeing Sera from the realm of Hela, she becomes a Corival, a contender to the throne.

So, Angela must pass individual trials, and if she does, she’ll be the new Queen of Hel. And she’ll have Sera by her side.

It looks easy, but it’s not. Angela must surrender a random memory every time she goes through a trial. But she has to fight more than the monsters and fears that appear in her trials. The whole realm is in alarm.

The art is astonishing and somewhat spooky. We’re traveling through the Underworld, and so the art is compelling. We also get to know more about Hela’s realm. Since we’re going to meet Hela soon on the big screen, knowing how dreadful she can be is a good idea.

Hela’s realm has many faces. Some people are having the eternity of their dreams, but others are being tortured by their fears.

For Angela, the realm and its rules are too complicated. But Sera helps her navigate it with the help of the right hand of Hela. Yup: a character who was born from one of the hands of the Queen herself!

This comic book is quite dark, to be honest. The artwork is astonishing but dark. It fits since we’re in the realm of the dead. And although we’re surrounded by trials, monsters, and fights, love is at its core.

Angela and Sera love each other. But they’re tough. Although Sera seems to be sweeter, death and time have changed her. Angela has changed too. She appears to be more open to sentiment.

This comic book tells a different type of love story. It’s compelling and yet relatable in many ways. It’s also an excellent opportunity to get to know more about Hela and how her brain works. We can take a look at her realm of Death. Not everything is punishment so that you might get a surprise.

But yes, Hela commands the Dead. So I guess that in the movie she’ll have a badass army of the dead. What do you think?

Despicable Me 3 was so much fun! The Minions are back!