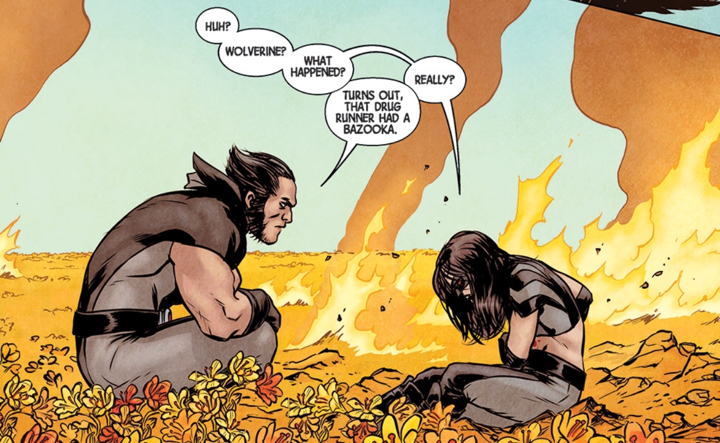 This week we’re reading All-New Wolverine Vol. 1: The Four Sisters [The Book Depository]. X-23, Laura, the cloned daughter of Wolverine is on a mission in Paris along with Angel. There she discovers that the villain is one of her clones! How traumatic can it be to find out that the one making all the fuss is someone just like you?

Wolverine mentored Laura, so she stopped being a weapon and an assassin. Now, she’s the new Wolverine. She took her father’s job, and she’s trying hard to be a Superhero. However, things are getting strange. She discovers that there are some clones of her who want revenge. A secret part of the Government created them, and they took away all their feelings. They don’t care if they’re shot, or if they die.

One of the clones is just a kid. She goes to Laura’s apartment to ask for help (in her own way). And so, she embarks on a mission to discover all the mess. While she tries to teach the clones not to kill, she also tries to help them.

The organization who experimented on them, made their feelings go away and shortened their lives in the process.

And so, she decides to ask help from no other than Doctor Strange. In the beginning, he’s unwilling to help the clones arguing that they’ve done too many bad things. However, Laura convinces him because she was bad once too.

Thanks to him they discover the technology that makes them sick. However, it’s too small for him to do anything. He cannot use magic, nor his expertise as a doctor. So, he decides to send them to the Wasp. She’ll help by being small.

And so, with the aid of the Wasp, Laura discovers what’s going on inside one of the clones. However, the organization finds them, and things go astray. But, Wolverine has a plan. With the help of the remaining clones, they decide to take down that organization.

They lose another clone in the process. It seems that she had made a pact with someone else to spare the life of the youngest one.

Laura is a conflicted individual, and she sees herself in the kid. She doesn’t want her to have a harsh life as she did. And so, she takes her under her wing.

The central topic of this issue is to seek justice without revenge. When you seek revenge, you’re no better than the villains who did wrong. However, in the search for justice, you go beyond the animal hidden within.