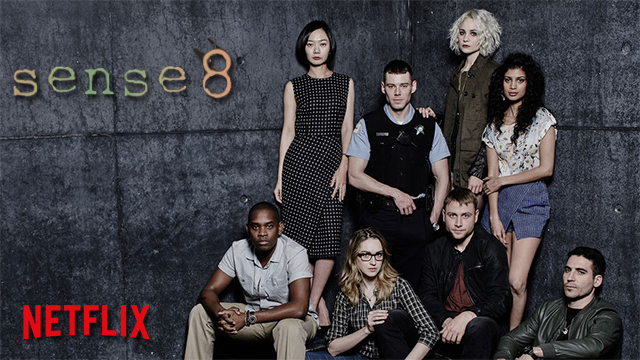 I discovered Sense8 perhaps a little bit too late. However, I’m glad I did since it makes you think a lot! It makes you want opening yourself to new possibilities. This show is mindblowing. I had a little bit of a hard time in the beginning to grasp the idea, but then I was too hooked on it. Plus, it has some very sexy scenes.

[SPOILERS: this review has lots of spoilers about the show. I won’t tell you everything, of course, since there’s too much going on. But, there’s enough in here to spoil a great part of the show. Proceed at your own risk.]

Sense8 tells the story of eight strangers who get linked through their minds. Each of them belongs to a different culture, and are located in various parts of the world. Sun is in South Korea and rocks fighting. Wolfgang is in Germany, and he’s a member of a gang. Lito is in Mexico, and he’s an actor. Will is a police officer from the US. Capheus is in Nairobi and drives a bus. Nomi is a transwoman and a hacker from San Francisco. Kala is a pharmacist from India. Riley is an Icelandic DJ who lives in London.

It all happens with Angelica who dies and “births” this group. Then, they’re all connected mentally and emotionally. During the first season, they all need to adjust to their new situation. So, while you get to know each of them, you also get some funny situations and surprises along the way. But, not everything is as smooth.

Another sense8 called Jonas reveals that an obscure organization called the Biological Preservation Organization (BPO) is hunting them down. So, while they learn how to relate to each other, and while they try to adjust, they also try to hide from Whispers. Whispers is one of the high-ranking “hunters” from BPO. And it’s spooky!

One of my favorite characters is Lito, the Mexican actor. He’s a gay drama queen who is hiding his sexuality from the public. He could damage his career. He is funny, over-sensitive but great at lying. I love when he interacts with Sun. The Korean girl is tough, kick-ass, and has a horrible family. Despite being rich, she is imprisoned because of her brother’s crimes. Everything to save the company. She needs Lito to bring herself to mourn. And Lito needs her to bring toughness into his life.

You’ll end up loving all the characters, really. Each of them gives the group a different set of abilities. And together they’re awesome. Because of their link, all of them can do what the rest can. How cool is that?

Prepare yourself to embrace love is love in this show. You get all types of different people, from different cultures, who are connected to each other and embrace their personas at a deep level. This is one of the most open-minded shows I’ve ever encountered, and I’m sad to know it only lasted two seasons. I just hope that someone re-takes it or continues the stories in written form.

If you’re celebrating Pride month, this is also an excellent choice. You have two seasons of fantastic episodes and incredible characters that will enchant you. You also have great couples to ship and a lot of Pride celebrations! Lito goes to Brasil to celebrate Pride, and it’s huge!

If you have the opportunity, give this show a try. Also, be open to getting your mind blown by the stories, the characters and all the love on the screen!

Harry Potter 20th Anniversary: are we that old already?