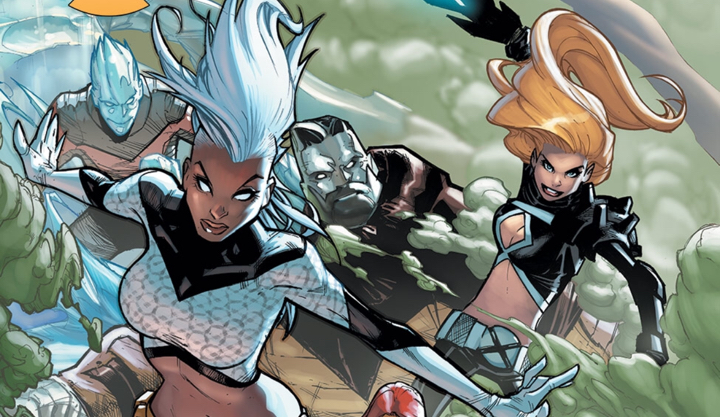 This THORsday we’re exploring the mess in Extraordinary X-Men Vol. 1: X-Haven [The Book Depository]. In the world, there are the X-men, the Inhumans, and humans. And all of them are scared and fighting against the X-men. A mist is either killing them or sterilizing them. The future looks grim, and so, Storm has no choice. The X-men are at war for survival.

For starters, Wolverine has killed all the X-men in his timeline. Not only he isn’t interested in helping, but he also seems to not trusting himself at all since he could end up doing the same. Jean ends up convincing him. It’s a funny couple, since Wolverine is very old, and Jean is just a teen.

Things go astray when Mr. Sinister decides to use the DNA of Cyclops to destroy the X-men. He is an abomination, and so, everybody ends up fighting him. When they can finally win Cyclops, and Mr. Sinister cool things happen.

Although this is a scene lost in the comics, it’s crucial. An X-men saves an Inhuman. Things could be much easier for everyone if hate would run amock in all minorities. Instead of being divided, if they were together, things wouldn’t be as gloomy.

Despite this, they still have to discover how to stop the killing and sterilization of the X-men. Will they be able to do it?

Ant his is the best shot of the comic. Wolverine and Jean, chilling together and having a friendly conversation. They do look like as an odd family of sorts, with a very grumpy Grandpa and a fascinating Jean at his side. Don’t you think?

The Midnight Sea by Kat Ross