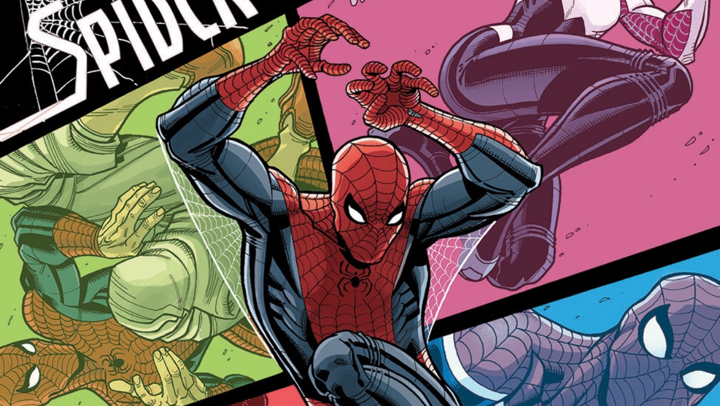 This week we’re reading Spider-Verse: Warzones! [The Book Depository] I have to admit that it’s a little bit weird: you have lots of Spiders, and it’s quite messy. But, it’s also fun. We are in an alternate universe where Spider-Man, Spider-Gwen, Venom and other Spiders end up. Their memories are confusing. How can Spider-Gwen be in a place where she has died? And, how can there be a Spider-Ham that loves eating pork?

If your mind is exploding, Gwen’s doing that too. She is suspicious of her new Spider-friends, but all are nice so far. However, the villains seem to be a pain.

She rescues Spider-Ham from Osborn, but it turns out that the guy wants to help. Besides, Ham is a mess. He’s only helping Osborn because of the food. (Spoilers: he won’t realize who the real villain is almost until the end!)

So, there’s a Spiders meeting.

And they all get to befriend each other and exchange their origin stories. Most of them are similar to one another, with one exception: Ham’s. I laughed so hard that I ended up with a stomachache! Ham is hilarious.

Osborn convinces the Spiders to work for him to find out how to send them all to their homes. However, Spider-Gwen doesn’t believe him at all and decides to go and do some heroics. And she ends up visiting her tomb, where she meets the Peter Parker of this Universe! And he has no Spider powers anymore.

And while they’re talking, Venom appears! Venom is completely obsessed with Peter, and so he starts attacking him. Fortunately, Gwen is there to save his day. While talking, they realize that Osborn isn’t the good man he preaches to be. And so, these two friends set up a plan to help the other Spiders.

By the time they reach the rich guy’s building, the others have already discovered Osborn’s true intentions. The fight is messy, and even a villain joins to help. That was completely unexpected.

This is a cool comic book. However, I must admit that I expected more from it. It’s nice to see many Spiders together, but the villains felt quite short. I loved Spider-Gwen and Spider-Ham. Their dynamics were funny. I also loved when they all talked about their origins stories, and Ham’s turned out to be the strangest of them all.

If you love Spider-Man, then you might love this volume. It’s okay, but it’s not great. You get a great Gwen in it, funny quotes and interesting art.