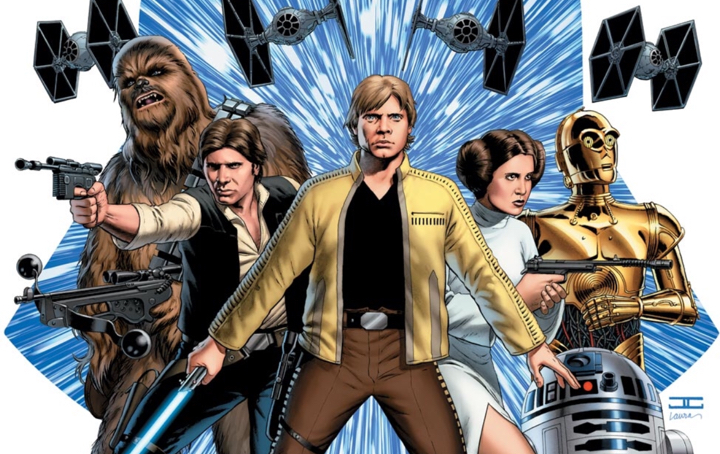 Today is Star Wars 40th Anniversary! One day like this, just forty years ago, Star Wars made it to the big screen. Today is also the Geek Pride Day. So, today is perfect! And it’s also comics THORsday! So, we’re going to celebrate everything with Skywalker Strikes“>Skywalker Strikes [The Book Depository]. If you love Star Wars, you’ll probably enjoy reading further adventures in the comics. Plus, you get to enjoy your favorite heroes even more.

In Skywalker Strikes we are in a period where the rebellion is hopeful. The evil Galactic Empire’s greatest weapon, the Death Star, has been destroyed by Luke. With the Imperial Forces in disarray, the Rebels look to press their advantage by unleashing a daring offensive throughout the far reaches of space, hoping to defeat the Empire once and for all and at last restore freedom to the galaxy.

This trade is plenty of action. If you miss Han, Leia, and Luke in pure action, this comic book is for you! Not only we get to know their personalities better, but we also get a glimpse of what happened off-screen.

For one, Han and Leia are arguing and liking and hating each other with great passion. They make a perfect team, both fighting and exchanging loving glances.

The rebels go into a station to sabotage the Empire. And they discover a lot of slaves. In their desperate escape with them, they find out that the other negotiating party is no other than Darth Vader. Han entered the precinct under the seditious intention to negotiate.

However, when Darth Vader appears, and Leia makes the wrong decision, everything goes crazy. And, naturally, the action appears.

In a fight between Luke and Darth, Vader discovers his old lightsaber. At that moment he realizes that there might be more to Luke than meets the eye. So, we find that Vader didn’t know about Luke being his son until this moment.

We also get to know how this fight affects Luke on an emotional level. He doesn’t feel like a Jedi, and so he goes solo to his planet to his old house.

We get to enjoy our favorite scenes in the comics: remember Luke training? Or Luke and Leia almost kissing but just arguing all the time? Well, this comic book is plenty of those scenes! It’ll get you super emotional.

After reading it, I’m sure you’ll want to watch the movies again. It was just the feeling I had when I finished reading this trade!

Consider this comic book for reading: nostalgia will hit you hard. I love the droids, but I also love the dynamics of the whole team. Don’t miss the artwork of this comic book. It’s incredible. You can’t stop staring at all the characters and also the environment.